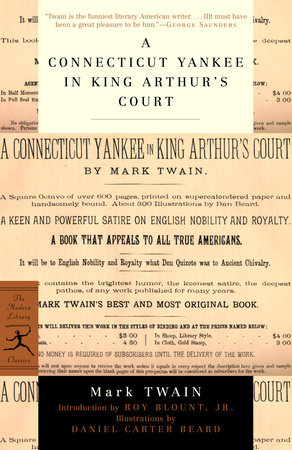 1.  How does Hank Morgan change throughout the novel? Is this change for the better, or for worse? How does his speech reflect his change in attitude?

2.  The theme of the “mysterious stranger” (an outsider who enters a community or circle and enacts some kind of disruption) often appears in Twain’s works. How does Hank use his status as an “outsider” to his advantage? What does he bring from the outside that benefits sixth-century England? Into which world does Hank ultimately fit?

3.  What is Hank Morgan’s view of the Catholic church?

4.  Many critics consider A Connecticut Yankee to be Twain’s most flawed work because he simply wanted to do “too much.” Do you agree? If so, why?

5.  Consider the end of the novel. What statement does Twain make with this ending? Do you feel it is a fulfilling way to end the book?

The House of the Seven Gables
Nathaniel Hawthorne

To Build a Fire and Other Stories
Jack London

Heart of Darkness and The Secret Sharer
Joseph Conrad

Journey to the Center of the Earth
Jules Verne

The Complete Plays
Christopher Marlowe
Back to Top