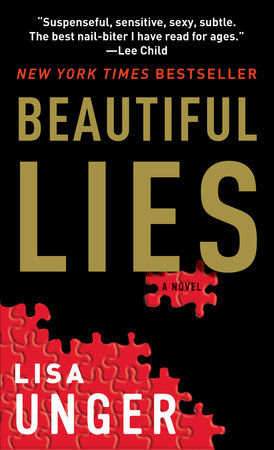 In Lisa Unger’s debut novel, she spins a web of deceit with her poignantly drawn characters. This guide is designed to help you explore her themes of choice, trust, freedom, and love.

An expertly crafted literary thriller, Beautiful Lies introduces a compelling young heroine as she unravels how the choices she’s made have turned her into the woman she’s become.

Ridley Jones knows that the smallest coincidences can have more impact than the big decisions: She steps off the curb to save a child from being run over, and suddenly her face is plastered on every TV screen and newspaper in the country. When an unexpected note is left in her mailbox and a mysterious stranger appears, eager to help her solve the puzzle, her beautiful life is soon shattered.

1. One of the novel’s main themes is choice, and how both big choices and little ones can have a profound impact on a person’s life. Did Ridley have a choice in finding out the truth about her past? If she’d chosen to ignore the first picture and note, could she have avoided all the questions and secrets that arose?

2. Would it have been possible for Ridley to ignore the events of the past and still have developed a true sense of self? Would you be able to?

3. On page 17, Ridley says, “Freedom, I’d have to say is probably the most important thing to me, more important than youth, beauty, fame, money.” Does this freedom Ridley craves influence the lies that have been told to her her entire life? Or is this freedom what could have protected her from asking questions about her past?

4. Throughout the story, the author compares Jake to Zack. Are there any similarities between the two men? In the beginning, what does Ridley admire about each of them?

5. Why did Jake keep the truth from Ridley for so long? Would it have been easier to tell her who he was from the start? Would she have believed him? Would you?

6. The author brings up the idea of parental (and adult) control over children, even after these children have grown up. Is there a control parents will always have over their child? Or at some point is control relinquished to the child to live his/her own life? How could Ridley’s parents have handled the situation differently? Would it have worked?

7. On page 51, Ridley says, “When you love someone, it doesn’t really matter if they love you back or not. Having love in your heart for someone is its own reward. Or punishment, depending on the circumstances.” By the end of the novel, has Ridley’s view of her family and Jake altered this idea of love? How has it altered? If her family and Jake followed the same definition of love, would their views have been altered by the events of the story?

9. Do you believe Ridley’s father and Max should both be penalized or blamed for what happened? What about Ridley’s mother and Ace? Did any of these people have a responsibility to tell Ridley what happened to her? Why or why not?

11. Do you think Ace’s drug addiction and problems with his parents were related to Ridley’s history, which he overheard their father and Max discussing one day? How do you think Ridley would have handled the truth had she been told by her parents instead of finding out the way she did?

12. On page 252, Ridley says, “I was operating under a faith that the universe conspires to reveal the truth, that lies are unstable elements that tend toward breaking down.” Do you think the truth would have revealed itself to Ridley without Jake’s involvement? Would it have been easier or more difficult to take without Jake?

13. On page 368, Ridley asks, “Isn’t that so often true with family, that we see them through the filters of our own fears, expectations, and desire to control?” How does this apply to each of her family members? How is it affected by the truth that’s come out, and how will it affect their relationships moving forward? Can Ridley, or anyone, project fear, expectation, or desire to control onto how she views anyone else now?

14. By the end of the story, what do you think of Zack’s and Esme’s role in Project Rescue? Was it right for Esme to help Max as she did because of her love for him?

15. On page 369, Ridley says, “We don’t have control, we have choices.” And on page 371, she says, “In life there are only good and bad choices. And sometimes even choices can only be judged by their consequences. And sometimes not even then.” Is it really as simple as a matter of choice? How would any of the characters agree or disagree with these ideas?

16. When Ridley confronts Jake on the Brooklyn Bridge, she wants to know how he found her to begin with. He tells her that he saw her picture in The Post, just like Christian Luna. Can this be the truth? Or is Jake hiding more than Ridley ever realizes even as the book ends?

Try Not to Breathe
Holly Seddon

No Time for Goodbye
Linwood Barclay

Think of a Number
John Verdon

Never Look Away
Linwood Barclay
Back to Top