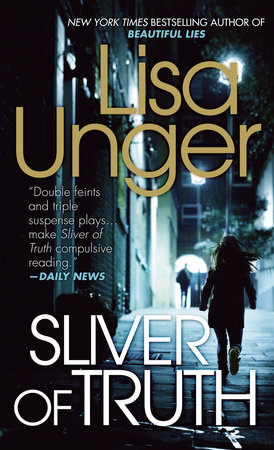 In Sliver of Truth, rolls of film developed at the corner drugstore spark a life-threatening chain of events for freelance writer Ridley Jones. The gripping story that follows is full of twists and turns, as well as many absorbing themes: finding truth in a web of deception, the meaning of family and what defines a parent, hiding one’s true self as a means of survival, searching the past for clues about the present. The questions below are intended to assist your reading group’s discussion of Lisa Unger’s fast-paced, thrilling novel.

Attention: Plot spoilers throughout this guide.

1. Of all the baffling plot twists in Sliver of Truth, which one caught you most by surprise? Why?

2. The book’s pivotal scene–where Ridley confronts Max at Potter’s Field–bookends the novel, appearing at the beginning and near the conclusion. Why do you think the author chose to structure this scene like this? What did you think of having it split in this way?

3. In chapter 2, Ridley describes her childhood habit of hiding from adults, saying, “I just got better and better at finding places to hide. Eventually I had to reveal myself or never be found” (page 21). In the context of the novel, does this statement have another meaning? If so, what?

4. What was your opinion of Dylan Grace? At first, did you think he was being honest with Ridley about his motives for finding Max?

6. Talk about the relationship between Dylan and Ridley. Did you expect that he and Ridley would get together? Why do you think they were so attracted to each other?

7. “I was filled with dread and fury, and yes, the slightest glimmer of hope,” Ridley says after she finds out Max is still alive (page 283). Why hope? Does this foreshadow her ultimate encounter with Max? At any point in the novel did you believe Max was alive?

8. Ghosts and hauntings are recurrent themes in Sliver of Truth. Discuss some instances where they are prominent, and their significance. Does the author employ other symbols like these?

9. “I have a tremendous ability to compartmentalize my emotions. Some call it denial, but I think it’s a skill to be able to put unpleasant things out of your head for a little while in order to accomplish something else,” (page 98). Consider this statement of Ridley’s. What does it reveal about her personality? Do you agree with what she says?

10. Nature versus nurture is a theme Ridley frequently debates with herself: Is her true self a result of her adoptive parents’ upbringing, or is she Max’s daughter (and therefore shares his traits)? What do you think? Are we really products of our DNA, or do the people around us shape who we become?

11. Discuss Jake. Did you imagine that he was not who he claimed to be? Were you surprised to discover what his real identity actually was? Do you think Ridley suspected that Jake was lying to her?

12. If you read Beautiful Lies, did you realize that Jake lied to Ridley on the Brooklyn Bridge?

13. Why was Ridley unable to see the real Max, despite the attempts by many to inform her of his wrongdoings? For that matter, why does it seem that all the men in Ridley’s life (Dylan, Jake, her ex-boyfriend Zack, even her adoptive father, Ben) hid their true selves from her?

14. “I’m sure you were hoping for a neater package–the villain is caught and brought to justice. I live happily ever after” (page 351). What did you think of the book’s ending? When Ridley’s real intentions against Max were revealed, were you surprised?

15. What do you think the title means?

Into the Black Nowhere
Meg Gardiner

The Darker Side
Cody McFadyen

The Ice Beneath Her
Camilla Grebe

The Girl Before
Rena Olsen

The Husband
Dean Koontz
Back to Top