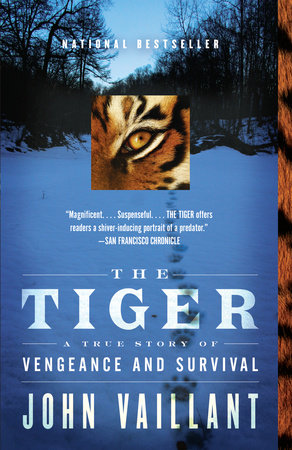 The introduction, discussion questions, and suggested further reading that follow are designed to enhance your group’s discussion of John Vaillant’s arresting account of the hunt for a man-eating tiger in Russia’s most diverse forest.

Mixing adventure, social history, and animal psychology, John Vaillant’s The Tiger focuses on the killing of Vladimir Markov to tell a much larger story about the long, complicated, and sometimes terrifying relationship between humans and tigers.

The Tiger is set in the thick forest of Russia’s southeastern-most territory, Primorye, a region of unsurpassed biodiversity—and unyielding human poverty. In the Primorye, desperate conditions drive many people to poaching—and even to so dangerous an activity as tiger hunting. Across the nearby border in China all parts of the Amur tiger, from pelt to penis, will fetch high prices, a temptation impossible for some to refuse.

It is in this environment that the affable hunter and sometime poacher Vladimir Markov makes the fatal mistake of stealing the remains of a tiger’s wild boar kill and very likely shooting and wounding the tiger. That Markov is hunted down, and savagely killed and eaten by the tiger is terrifying enough. What makes his fate even more chilling is the tiger’s apparent intention to kill Markov, motivated by a harrowing mixture of hunger and vengeance. The tiger carefully plans his attack and seems to draw Markov toward him. Indeed, the evidence of this tiger’s behavior suggests not only that the big cats have minds but that they can, to some degree, anticipate the intentions of others.

Vaillant follows Yuri Trush, the charismatic leader of an antipoaching unit, as he investigates Markov’s death. Trush is dedicated to enforcing hunting laws and protecting endangered wildlife like the Amur tiger. But he’s well aware of the desperate conditions that can drive otherwise honorable men to poaching, and he views Markov and his gruesome end with both anger and sympathy. He comes to view the tiger itself with a mixture of reverence and dread fascination, trying to stay one step ahead of a fearsome—and hungry—adversary. When the tiger kills and devours another, this time entirely innocent, hunter, the search for the tiger takes on all the urgency of a big-city police manhunt for a serial killer.

Throughout the book, Vaillant explores the nature of tiger intelligence—and, by extension, all animal consciousness—drawing upon scientific research, the myths and direct experience of tribal peoples in Russia’s far east, and observations of Trush and other Russians who have shared the region with tigers for many years. The trans-species understanding and communication that occurs between humans and tigers is one of the most compelling aspects of the book.

The Amur tiger, magnificent in itself, is the lens through which Vaillant tells the larger story of our human co-evolution with the big cats, their continuing importance for the health of the ecosystem, and the changing social and political conditions that lead to habitat destruction and tiger poaching. Vaillant concludes with a sobering look at the plight of tigers today, their prospects for survival, and the positive steps being taken to protect them.

1. The Tiger is a riveting book, with the momentum of a thriller and the depth of insight of an extended philosophical meditation. How does Vaillant create suspense throughout the book? What are the major insights he offers about tigers and the larger issues that come into focus through his investigation of the killing of Vladimir Markov?

2. What historical forces have contributed to the desperate conditions facing the people of the Primorye? How understandable/forgivable is their poaching?

3. Vaillant writes: “What is amazing—and also terrifying about tigers—is their facility for what can only be described as abstract thinking. Very quickly, a tiger can assimilate new information . . . ascribe it to a source, and even a motive, and react accordingly” [p. 136]. In what ways does the tiger that kills Markov engage in abstract thinking?

4. Does Markov deserve the fate that befalls him? Is it fair to say that he brought on his own death by stealing the tiger’s kill or by shooting at the tiger?

5. What kind of man is Yuri Trush? In what ways is he both fierce and thoughtful, authoritarian and at the same time sensitive to the desperation that makes people of the Primorye break the law? How does his experience with the tiger change him?

6. Vaillant attributes the attitude of entitlement of Russian homesteaders, at least in part, to biblical injunctions: “1: Be fruitful and multiply, and replenish the earth.  2: And the fear of you and the dread of you shall be upon every beast of the earth . . . . 3: Every moving thing that liveth shall be meat for you; even as the green herb have I given you all things” [p. 150]. What are the consequences of this way of viewing our relationship to the earth and other animals?

7. Chapter 18 begins with a epigraph from Moby-Dick. What are the parallels between Trush’s hunt for the tiger and Ahab’s pursuit of the whale and between the behavior of the tiger and that the whale in these stories?

8. After he helps to kill the tiger, native people tell Trush he’s now marked by it, that he now bears, as Vaillant puts it, “some ineffable taint, discernible only to tigers” [p. 290]. When an otherwise tame and placid tiger tries to attack him at a wildlife rehabilitation center, Trush wonders if “some sort of a bio field exists . . . . Maybe tigers can feel some connection through the cosmos, or have some common language. I don’t know. I can’t explain it” [p. 291]. Is this merely a fanciful conjecture, or could it be true that tigers can sense the presence of someone who has killed one of their kind? If true, how would it change our views of animal consciousness?

9. Vaillant suggests that, like captive tigers, most of us “live how and where we do because, at some point in the recent past, we were forced out of our former habitats and ways of living by more aggressive, if not better adapted, humans. Worth asking here is: Where does this trend ultimately lead? Is there a better way to honor the fact that we survived?” [p. 298]. How might these questions be answered?

10. Vaillant argues that “by mass-producing food, energy, material goods, and ourselves, we have attempted to secede from, and override, the natural order” [p. 304]. What are the consequences of this desire to separate ourselves from nature?

11. What makes tigers both so frightening and so fascinating? What mythic value do they have for humans? In what ways are they an important part of the ecosystem?

12. What does the book as a whole suggest about our relationship to nature, particularly to the animals that share the earth with us?

13. It is a precarious time, not just for the Amur tiger, but for all tigers. Poaching and the destruction of tiger habitat pose major challenges to the survival of the species. What would be the significance of the loss of the tiger? What positive steps have been taken to protect it?

14. What changes in human behavior need to happen in order to preserve the (Amur) tiger and similar species? How likely is it that humans will make such changes?

John Vaillant is also the author of The Golden Spruce. He has written for the New Yorker, The Atlantic, Outside, and National Geographic. He lives in Vancouver, British Columbia, with his wife and children.

V. K. Arseniev, Dersu the Trapper; David Grann, The Lost City of Z: A Tale of Deadly Obsession in the Amazon; Herman Melville, Moby Dick; Nathaniel Philbrick, In the Heart of the Sea: The Tragedy of the Whaleship Essex; Anna Reid, The Shaman’s Coat: A Native History of Siberia; Dan Morrison, The Black Nile: One Man’s Amazing Journey Through Peace and War on the World’s Longest River; George Page, Inside the Animal Mind: A Groundbreaking Exploration of Animal Intelligence; Matt Cartmill, A View to a Death in the Morning: Hunting and Nature Through History.
Learn More About The Tiger
print

This Is Chance!
Jon Mooallem

Into the Storm
Tristram Korten

Hellhound On His Trail
Hampton Sides

The New Silk Roads
Peter Frankopan
Back to Top