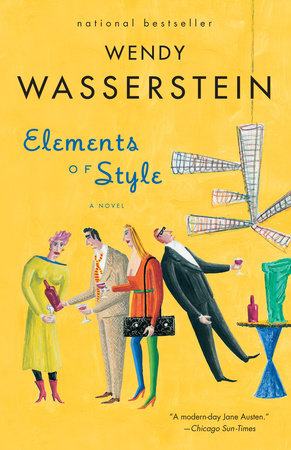 “Chick-lit with a chill and a pedigree. . . . A blithe, funny feat of escapism and a sobering reminder of the inescapable.”
—The New York Times

The introduction, discussion questions, author biography, and suggestions for further reading that follow are designed to enhance your group’s discussion of Elements of Style, the funny, wrenching, deliciously satirical debut novel from the late, great Wendy Wasserstein.

The Upper East Side urban gentry are all in a tizzy. Not only must they worry about who will be seated beside whom at the next big dinner party and when the next shipment of Birkin bags arrives, now they have to make sure there’s an adequate supply of Cipro in the apartment in case of another anthrax attack, and sort out where to winter now that 9/11 has made international travel such a bore. To top it off, Frankie Weissman, pediatrician to every “it” child in upper Manhattan, has had the politically correct audacity to move her office to the cusp of Harlem (gasp!), which means all sorts of riff-raff in the waiting room.

In this razor-sharp peek at the complicated tango of the wealthy and fashionable, Wendy Wasserstein lovingly skewers Manhattan’s privileged set, from the nouveau riche to the old-school thoroughbreds, from the frenzied climbers to the trendsetters. Among this rich constellation of characters is Samantha Acton, whose effortless chic takes everyone’s breath away, yet who is miserably paralyzed by her own ennui. We meet Clarice Santorini, homebody and devoted mom, who has learned to gracefully kowtow to her wheeling, dealing husband, a self-made film baron with anger management issues and the social finesse of an ox. At one end of the spectrum is Judy Tremont, whose only true goal is to rank among the top echelon of New York society, and whose brainy husband embarrasses her by spouting Goethe at the dinner table; at the other is Frankie Weissman, whose father is dying of Alzheimer’s, and whose love life has disappointed her.

Set against the backdrop of a newly-panicked New York, still reeling from 9/11, Elements of Style irreverently vivisects the hilarity and nonsense, the fears and frailties, of even the most untouchable New Yorkers.

1. Wendy Wasserstein’s award-winning play, The Heidi Chronicles, follows its female protagonist’s search for self-definition amidst frustration, ambivalence, sorrow, and a coterie of flawed friends. Despite her status as a successful professional, and her involvement in the feminist movement, Heidi Holland hungers for a sense of validation, allows herself to be subjugated to an arrogant, untrustworthy man, and struggles to feel she is part of the history taking place around her. A recurring theme in the play is the disconnect between accomplishment and a sense of well-being. In what ways does Frankie Weissman parallel Heidi Holland? Does 9/11 form the same kind of historical backdrop in Elements of Style that the feminist movement provides in The Heidi Chronicles? If so, how does Frankie position herself in relation to that sociopolitical moment? What kind of progress does Frankie make in the search for self-definition? What is the source of Frankie’s conviction that she is a perennial outsider?

2. For Judy Tremont, 9/11 is an excuse for Ativan anti-anxiety tablets, “just to take the edge off” [p.12]; the cause of headache-inducing gridlock—“the worst traffic days were the ones when the president decided to come to town” [p. 14]; the reason “commercial travel [was] close to impossible, even in first class” [p. 47]; an opportunity to redecorate her home since “it’s unpatriotic now to sleep with the French these days” [p. 104]; and the inspiration for a new approach to floral centerpieces as “ever since 9/11, austerity was in. This wasn’t the time for floating gardenias and birds-of-paradise” [p. 107]. What is Wasserstein’s point in using humor to explore one New Yorker’s reaction to 9/11? What is she saying about the way we process fear? Or is she simply ridiculing Judy and people like her?

3. Barry Santorini’s brutal, heart-on-sleeve honesty makes him both vicious and deeply sentimental. Do his softer moments—“What he wanted now was to express how much love he felt. He knew he had a lot to share and had kept it hidden. . . . He still had a commitment to the future and humanity. . . . He still had a heart” [p. 294]—ring true? Or are they the rantings of a narcissist? Does his background as a humble shoe repairman’s son make him more likeable as a character?

4. After years of failed attempts at having a child, Samantha “had lost confidence in her ability to mother. Like everything else, it seemed too complicated, and not necessary. . . .Samantha preferred to avoid any prescribed intimacy, even with a baby. She longed for pure abandonment” [p. 55]. What does the word “abandonment” mean here? Is there anything that Samantha views as “necessary”?

5. Despite its comic handling, Elements of Style is, at heart, a look at the frailty of life, and the futility of even our most sophisticated social mores to protect us from disaster and mortality. Barry’s seemingly limitless power in the film industry cannot protect him from the ravages of prostate cancer. Judy’s escalating success in the ruthless business of social climbing cannot prepare her for the freak accident that will end her life. Jil’s carefully cultivated pedigree evaporates instantly upon his death, revealing a homosexual immigrant with dubious education. Where else in the novel does this pattern play out? Does anyone in the story emerge unscathed? In what ways can this novel be read as Wasserstein’s reflection on the lessons of 9/11?

6. Why does the author insert a fictional suicide bombing resulting in forty dead and seventy wounded on New York’s Upper West Side? Is this a plot devise, or does it have symbolic meaning?

7. Frankie “had a long history of ambivalence toward the entire privileged New York landscape. . . .She was most comfortable on its fringes” [p. 6—7]. Where does this ambivalence come from? Despite setting herself apart in this way, Frankie does achieve a certain thrill in being included in this landscape. When Samantha and Charlie Acton invite her to dinner, Frankie enjoys a “sense of accomplishment that after thirty years she was finally invited to the cool girls’ table” [p. 39]. And as she anticipates Judy Tremont’s party, she muses that “The butler greeting her at the door, the standing cocktail hour, the seated dinner, the English plates, the silver centerpieces . . . the after-dinner coffee and port . . . would all provide a grounding antidote” [p. 102]. To what is Frankie seeking an antidote? Why does she insist on labeling herself an outsider? Does her waffling on the cusp of the privileged world smack of disingenuousness?

8. Albert Tremont “took a secret delight in his difficult daughter’s acquisitiveness” and admires her classmates’ fathers who had “materialistic ambitions” [p. 18]. Why does Albert think highly of these traits? How do they contrast to his own? Why does his wife’s frantic jockeying for social position fill him with such contentment? Is Albert meant to be read as a buffoon?

9. Wasserstein peppers the novel with absurd images and moments, such as the white women dressed garishly as rappers at the Indie Film Benefit [p. 151], and the “three-foot hookah pipe filled with white narcissus and purple anemones” at Judy’s “Turkusion” party [p. 103]. What does the author intend with her use of the absurd?

10. Wasserstein has been praised for her ability to plumb the female experience for its spiritual and psychological complexities. Is there a difference in how she presents the female characters in the book versus the male?

11. As the novel closes, Frankie’s “ossifying loneliness” [p. 29] has come full circle. What has she learned along the way? What is the significance of the fact that Frankie is on the NICU ward both during the 9/11 terrorist attack and at the conclusion of the novel?

12. Samantha takes un unexpected liking to Judy Tremont, whose “obvious naïve aspiration” [p. 78] brings out a protective side of her. Why do Judy’s antics, which alienate so many others, elicit this fond reaction in Sam? Is there a similar impulse at work in Sam’s reaction to Barry, whose “out-and-out slovenliness . . . she found surprisingly appealing” [p. 123]?

13. Frankie, Samantha, and Clarice all share a propensity for feeling incomplete or ineffectual without a man to define them. Around Charlie, Frankie “felt a very unfamiliar ease as if she had joined a club she had forgotten existed. . . . She was, for the first time in years, not merely examining [life]” [p. 279]. For Samantha, “Being with Barry had made her feel she was no longer going around in circles. She had been a perfectly crafted set piece. But now she was a player” [p. 194]. “For Clarice, the fact that she was Mrs. Santorini wasn’t just about love or money or even family obligation. It was her entire existence” [p. 154]. Does Wasserstein convey any judgment about this propensity in her female characters? If so, how? What is Wasserstein’s intention in showing that even influential, self-made career women like Frankie suffer from this dilemma, as do stereotypical housewives like Clarice? Do any of them achieve a measure of true independence or self-reliance in the course of the novel?

Wendy Wasserstein is the author of the books Bachelor Girls and Shiksa Goddess, and of the plays Uncommon Women and Others, Isn’t It Romantic, The Sisters Rosensweig, An American Daughter, and The Heidi Chronicles, for which she received a Tony Award and the Pulitzer Prize. She was admired both for the warmth and the satirical cool of her writing. Each of her plays and books captures an essence of the time, makes us laugh, and leaves us wiser. Wendy Wasserstein was born in 1950 in Brooklyn and died at the age of fifty-five. Her daughter, Lucy Jane, lives in New York.

Claudia Barnett, Wendy Wasserstein: A Casebook; Dominick Dunne, People Like Us; Wendy Wasserstein, An American Daughter, Bachelor Girls, The Heidi Chronicles: Shiksa Goddess (Or, How I Spent My Forties), The Sisters Rosensweig; Tom Wolfe, The Bonfire of the Vanities
Learn More About Elements of Style
print

Memories of a Marriage
Louis Begley

Four of a Kind
Valerie Frankel

A Friend from England
Anita Brookner

Women on the Verge of a Nervous Breakthrough
Ruth Pennebaker

Everything She Thought She Wanted
Elizabeth Buchan
Back to Top