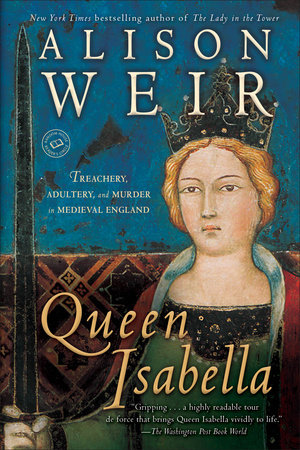 1. How far do you think the author has succeeded in rehabilitating Isabella? Do you think she set out to write a revisionist view of her? Or did that come about as a response to the historical sources that she studied?

2. Do you think our modern moral values allow us to take a more sympathetic view of Isabella than that of her contemporaries? Do you think she deserves our sympathy for her “moral” failings?

3. How would you account for Isabella`s transition from a model queen-consort and acknowledged peacemaker to a notorious femme fatale who became known as a jezebel and a she-wolf ?

4. Did you like Isabella? If you have read Eleanor of Aquitaine, did you ﬁnd her as charismatic a character as Eleanor?

5. Were the author’s arguments for Edward II’s survival convincing? If so, what was the most powerful evidence in favor of that theory? If not, why not?

6. Did you ﬁnd anything to like about Isabella’s husband, Edward II? Would you agree with the view that he was one of the worst kings in English history? What makes a good or a bad king?

7. Do you think that the issue of homosexuality is sensitively and objectively handled by the author? How should we allow modern politically correct views to inﬂuence the study of history?

8. It could be said that Isabella was a victim rather than a villainess. Would you agree with that view? And how far should we apply modern feminist perspectives when studying women of the past?

9. Isabella appears as a character in the ﬁlm Braveheart. What is historically inaccurate about that portrayal? Should she have been in the ﬁlm at all?

10. If you were asked to choose an actress to portray Isabella, who would it be? Were you convinced by the author’s theories as to what Isabella looked like? Should ﬁlmmakers always try to ﬁnd actresses who look like historical characters?

11. How do you account for Roger Mortimer’s transition from a staunch supporter of the Crown to an exiled traitor, and then to a tyrant? What do you think was the true nature of the relationship between Isabella and Mor-timer? Who was the dominant partner?

12. Did Isabella have blood on her hands? If so, whose?

13. What was Edward III’s attitude toward his parents? Do you think the troubles between them caused him great anguish? And was he caught up in a conﬂict of loyalties?

14. Contrast Piers Gaveston and Hugh le Despenser the Younger. Were both villains? Whose was the worst inﬂuence on Edward II, and why? Are you convinced that his relationships with both were homosexual? Did both deserve to be put to death? Was Despenser`s execution unnecessarily cruel?

15. Would you agree that Isabella`s reputation had been restored by the time she died? To what extent was Edward III responsible for this? Why do you think Isabella was so concerned about penitence and redemption in her last years?

The Mistresses of Cliveden
Natalie Livingstone