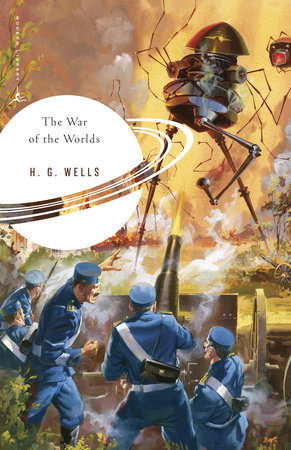 print
The War of the Worlds Reader’s Guide

1. In 1878 the Italian astronomer Giovanni Virginio Schiaparelli used the most advanced telescope of his day to map the surface of Mars. He discovered a number of dark, thin lines crisscrossing the planet and assumed that they were water channels?in Italian, canali. This was mistranslated into English as canals; as a result of this subtle linguistic error, many people in Britain and America believed these passages were man-made. It was in such an atmosphere of misunderstanding and scientific speculation that Wells published The War of the Worlds. Today, however, we know a great deal about Mars and the possibility of life there. Does our scientific knowledge of what is on Mars make the novel any less alarming? Why or why not?

2. Isaac Asimov has argued that The War of the Worlds can be read as an argument against British colonialism and the cold expansion of the empire. ?H. G. Wells must have wanted to write his book in such a way as to demonstrate the evils of [colonialism],? Asimov writes. ?He must have tried to show his own countrymen what they were doing to the world. The British had been in the forefront of the imperialistic drive, and by the end of the 1800?s, the British Empire included a quarter of the land area and the population of the world. . . . It seemed only poetic justice then that the Martian invasion in The War of the Worlds fell upon the British.? Do you agree with Asimov?s reading?

3. Wells begins the book with the chilling image of alien life watching over the earth. He describes the Martians as planning their attacks on an unsuspecting man with ?intellects vast and cool and unsympathetic.? How does this image resonate today?

4. Shortly before Wells died in 1946, he said, ?Reality has taken a leaf from my book and set itself to supersede me.? What does Wells mean by this?

5. When the Martians first land on earth, the people who encounter them initially treat the incident lightly, as if the aliens are a traveling amusement. Is this a realistic response? What do you think Wells is trying to say by this?

6. How does Wells use language and narrative style to create suspense and a sense of terror? Is the book frightening?

7. Many people consider The War of the Worlds the greatest science fiction book of all time. Do you agree? Why or why not? What other books are among the best? What defines a classic of science fiction?

Learn More About The War of the Worlds
print

The Acts of King Arthur and His Noble Knights
John Steinbeck

The Robots of Dawn
Isaac Asimov

The Coming of Conan the Cimmerian
Robert E. Howard

1984
George Orwell
Back to Top