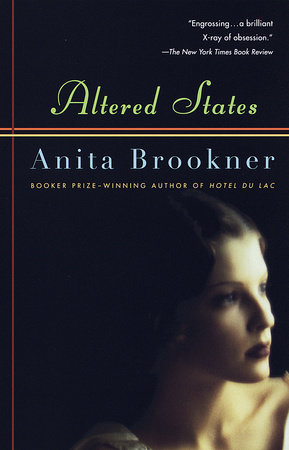 The questions, discussion topics, author biography, and suggested reading list thatfollow are intended to enhance your group’s reading of Anita Brookner’s Altered States. We hope they will enrich your understanding of this remarkable novel of passion and loss by one of England’s most intelligent, profound, and emotionally astute writers.

Alan Sherwood considers himself rather a dull man, absorbed in the familiar routine of his law practice, his modest social life, and visits to his widowed mother. But then he encounters Sarah Miller and his orderly life is thrown into frightening emotional disarray. Sarah fascinates him and holds him in helpless sexual thrall while eluding all his efforts to take possession of her. Tormented by his inability to control her and shocked by his mother’s remarriage, Alan submits to an engagement with Sarah’s friend, the fragile and dependent Angela. Alan attempts to be a good husband, but when Sarah suddenly returns, he momentarily turns his back on Angela, with tragic consequences that change his life forever.

Heartbreaking, eloquent, and exquisitely crafted, told with all of Anita Brookner’s famous skill and precision, Altered States is a masterful piece of work by a major writer at the height of her powers.

1. What do the narrative tone and vocabulary on the first page of the novel imply about Alan Sherwood, the narrator? What sort of initial impression do you get of him, and do you find that impression to be borne out or refuted as you read the book?


2. Alan presents himself as unemotional, speaking of “my temperament, which is stolid, and my history, which is not” [p. 8]. Later he says, “I knew myself to be fairly dull, fairly unremarkable” [p. 34]. What is Alan’s real nature? Why does he describe himself as being “entirely in character” when he speaks to Sarah on page 46? Does Sarah bring out his real nature, or does she bring out an aberrant version of Alan? What kind of a life might Alan have lived had he never met Sarah?

3. How does Brian’s attitude toward Sarah differ from Alan’s from the very outset? Why has he chosen Felicity as a partner? What makes their marriage successful?


4. After meeting Sarah at Humphrey and Jenny’s wedding, Alan says, “Already I knew that there would be an affair, and that it would not lead to possession” [p. 36]. Why does he decide to pursue her despite the odds? What conclusions is Alan drawing when he says, “The one lesson I learnt from the whole affair was that one is responsible not only for what one does but for what is done to one” [p. 56-57]?

5. Why does Alan compare his feelings toward Sarah with the ideal of “courtly love” [p.52] and say that his behavior “had more in common with the Middle Ages, or even the Dark Ages, than with the twentieth century” [p. 53]?

6. How does Sarah affect Angela and Alan’s decision to marry? What are Angela’s feelings towards Sarah, and does her choice of Alan as a potential partner have anything to do with those feelings? Would Alan have married Angela had he never known Sarah?

7. Why is Alan initially so appalled by his mother’s marriage? What are the reasons for her marriage? Is the relationship between Alan and his mother as simple as he makes it out to be? How does the reality differ from his version of it?


8. What do Jenny, Angela, and Alan’s mother have in common as wives? Why did each of them decide to marry, and how much did love have to do with their decisions? Alan claims to believe that women have reached a point where they can be equal to, and independent of, men. Does his behavior uphold this claim? How does he see, and treat, women?

9. Why is Alan so quick to see the disaster that occurred at home while he was in Paris as a punishment to himself? Do others agree with him?

10. What does Sarah want, from life and from Alan? Alan is convinced that he meant something special to her; is he right, or was he simply one of many interchangeable men in Sarah’s life? Is Sarah a contented person, or an unhappy one?


11. While Jenny is caring for Angela, Alan sees her presence as “malign” [p. 147]. Is she in fact malign, or is she simply a well-meaning woman who has had a hard life? Do you think that Jenny brings some of her troubles upon herself?

Anita Brookner was born in London in 1928. She received a B.A. from King’s College, University of London, and a Ph.D. in the history of art from the Courtauld Institute. Brookner taught at the University of Reading from 1959 to 1964, and since 1967 has been a Lecturer in Art History at the Courtauld. From 1967 to 1968 she was Slade Professor at Cambridge, the first woman to hold that position.

Since her first novel was published in 1981, Brookner has had a dual career as an art historian and a novelist. She has been remarkably successful in both fields and has published fourteen novels in as many years. Hotel du Lac, her fourth novel, won the Booker Prize, England’s highest honor for fiction.
Learn More About Altered States
print

Bird in a Cage
Frédéric Dard

A House and Its Head
Ivy Compton-Burnett

Me and Kaminski
Daniel Kehlmann

The Beggar and Other Stories
Gaito Gazdanov

The Life and Opinions of Zacharias Lichter
Matei Calinescu

Hill
Jean Giono
Back to Top