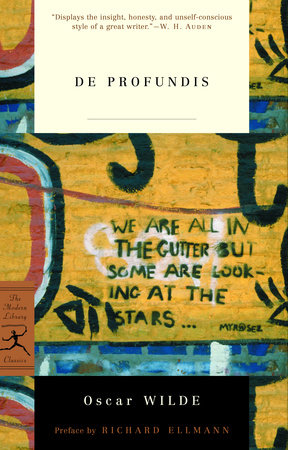 2. Examine the letter’s structure and define its different parts. Do Wilde’s style and tone remain consistent throughout?

3. In De Profundis, Wilde recognizes numerous ironies regarding the circumstances of his imprisonment, most notably that he himself is imprisoned after suing Queensberry for slander. What other ironies (or paradoxes) does Wilde point out? What role does irony play in the letter? Why might Wilde choose to speak in these terms?

4. Do you think Wilde is a reliable narrator? How might his memories of Bosie be influenced by his imprisonment? Do you find his criticism of Bosie fair? Why or why not?

5. Throughout De Profundis, Wilde compares Alfred Douglas to numerous literary figures, from the lion’s whelp in Agamemnon to Hamlet’s Rosencrantz and Guildenstern. What, if anything, do these figures have in common? How are they different? Compare the different contexts in which Wilde alludes to these figures.

6. What sort of freedom awaits Wilde upon his release? How does he aim to live?

7. Dante’s Inferno is one of the texts to which Wilde frequently alludes in De Profundis. Examine the different contexts in which he quotes from Inferno. What similarities, if any, can you find? Why do you think Wilde quotes from Dante so often?

8. Discuss Wilde’s invocation of Christ as both a literary and a historical figure. What quality of Christ does Wilde most admire? Why does Wilde call Christ the first individual in history? In what ways is Christ like an artist, according to Wilde? Richard Ellmann refers to this section as the letter’s climax. Would you agree? Why or why not?

9. After providing a withering critique of Alfred Douglas’s behavior, Wilde turns his criticism on himself, claiming, "I must say to myself that neither you nor your father, multiplied a thousand times over, could possibly have ruined a man like me: I ruined myself and that nobody, great or small, can be ruined except by his own hand." Examine the reasons he gives for writing this. Do you agree with his claim?

10. Toward the end of the letter, Wilde writes, "A man whose desire is to be something separate from himself, to be a Member of Parliament, or a successful grocer, or a prominent solicitor, or a judge, or something equally tedious, invariably succeeds in being what he wants to be. That is his punishment. Those who want a mask have to wear it." What is the price Wilde has paid for this knowledge? Is this something he could have understood in this youth? Why or why not?

Learn More About De Profundis
print
Back to Top