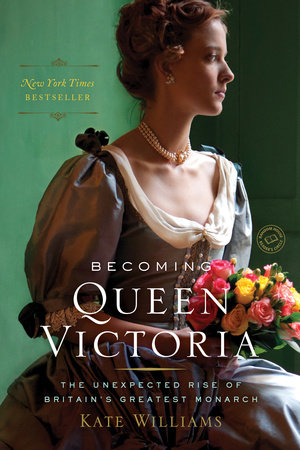 1. Some of Britain’s most successful monarchs have been female–including Victoria. Could being born into a position in which society suggests you are inferior actually be a helpful prelude to being a monarch?

2. By the time Princess Charlotte was born, the seven sons and six daughters of George III had between them fifty-six illegitimate children and no legitimate offspring. Her uncles tended to the spendthrift and debauched. Can you suggest why they turned out this way?

3. Charlotte had a miserable childhood, torn between two warring parents. Her story–and that of her aunts and her mother–suggests that life as a princess was restricted and suffocating. Even though history gives us more unhappy princesses than happy, our society celebrates “princess culture,” especially for little girls. Why are we ever more enthusiastic about princesses in the twenty-first century?

4. Do you think it is possible to have a happy royal marriage?

5. Charlotte’s death prompted the greatest outpouring of national grief in British history, equaled only by the death of Princess Diana in 1997. Why do so many of us grieve so deeply for people we don’t even know, and why for these two young women in particular?

6. When she was born, Victoria’s father said, “My brothers are not so strong as I am . . . The crown will come to me and my children.” Gaining royal power always entails the death of one’s parent or siblings. Do you think this must poison family relationships?

7. Victoria’s name was completely invented, and given to her to signify that she would never be queen. Was having a unique name a hindrance or a help? Does the same apply to the possessors of unique names in ordinary life?

8. The British royal family is historically German: George I was German, Victoria’s mother was German, and her husband as well. The family changed its name to Windsor in 1917, at the height of World War I. Was the German heritage an advantage in any way, or only something to be hidden?

9. Why did Victoria’s mother and John Conroy watch Victoria so obsessively? Can the “Kensington System” be justified?

10. We can charge Victoria with inventing one of modern life’s most overwhelming events: big, white weddings. Before Victoria, weddings were quiet events and brides wore any color. Victoria, gowned in white for her huge royal wedding, was driven through the streets to be fêted by her people. What political purpose do public royal weddings serve, and why have we increasingly adopted this custom?

11. How did Victoria walk the fine line of being head of state without upsetting society’s perception of the female role?

12. Elizabeth I said she had the “body of a weak and feeble woman, but the heart and stomach of a king.” Could Victoria have made a similar speech?

13. In 2013, British law was finally changed so that the firstborn child was the heir to the throne, no matter whether boy or girl. Why did it take British lawmakers so long to change previous practices?

14. Women gained the chance to stand for the British parliament in 1918, while in the United States the first woman was elected to Congress in 1916 and Senate in 1922, but British government has had very few women in positions of power. Why, in an age of female equality, is the top job in a country still so often taken by a man?

15. Should Britain still have a monarchy in the twenty-first century?

The Mistresses of Cliveden
Natalie Livingstone

Lady Almina and the Real Downton Abbey
The Countess of Carnarvon

Catherine the Great: Portrait of a Woman
Robert K. Massie

The Duchess
Amanda Foreman
Back to Top