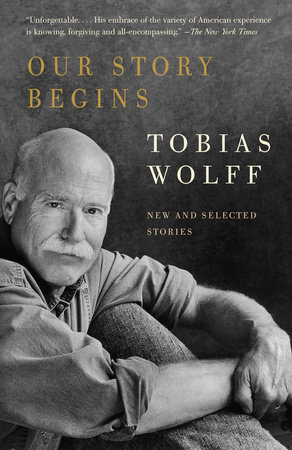 "Unforgettable. . . . Wolff’s voice is unfailingly authentic, while his embrace of the variety of American experience is knowing, forgiving and all-encompassing."
—The New York Times Book Review

The introduction, questions, and suggestions for further reading that follow are intended to enhance your reading of Tobias Wolff’s Our Story Begins by Tobias Wolff, a writer whose works have evoked comparison to such masters of the short story as Hemingway, Salinger, Raymond Carver, and William Trevor.

Our Story Begins brings together ten dazzling new stories and twenty-one classics by Tobias Wolff. Written over the course of thirty years, the stories portray soldiers and academics fraught with doubts about their place in the world; husbands and wives struggling with marital disappointments and domestic discontents; children estranged from their parents’ and siblings locked in mutual antipathy. Life-long friends discover uncomfortable truths about one another and themselves, ordinary events suddenly spiral out of control, and unexpected temptations undermine previously unquestioned moral codes. Together, these stories display the distinctive blend of comedy and tragedy, warmth and melancholy that permeates Wolff’s recent novel, Old School, as well as his acclaimed memoirs, This Boy’s Life and In Pharaoh’s Army.

1. The majority of the stories are told in the third-person. Is the narrator’s voice for the most part sympathetic, neutral, or distant? What techniques does Wolff use to draw you into the characters’ lives and the events depicted in the stories? Discuss how the conversations between characters, their own musings and observations, and the detailed descriptions of the way they look and dress bring their personalities into focus.

2. Soldiers and veterans are the focus of "Soldier’s Joy," "Desert Breakdown, 1968," "The Other Miller," and "Awaiting Orders," and make appearances in several other stories. What do the stories demonstrate about the effects of the military experience on individuals? How do the various characters deal with the difficulty of balancing the demands (or expectations) placed upon them and their own impulses and ethical standards? In what ways does military service provide a rationale for unacceptable or aberrant behavior? Do the more recent stories ("Awaiting Orders" and "A Mature Student") mark a change in Wolff’s ideas about the military? If you have read In Pharaoh’s Army include this in your discussion.

3. Lying or hiding the truth is a recurring theme in Our Story Begins: "The Liar" deals directly with a young man who makes up stories about himself and his mother; in "Two Boys and a Girl" a boy convinces himself that betraying his best friend is reasonable; and the husband in "Say Yes" equivocates when discussing interracial marriage with his wife. Discuss the different forms of lying Wolff explores. In which stories do characters lie to themselves about their own motivations or feelings? In which stories do characters lie to protect or please other people? What rewards do lying and/or betrayal bring to the characters? What are the negative consequences of their deceptions?

4. In "Deep Kiss," "Down to Bone," and "Her Dog," memories of the past, as well as imaginative fantasies, provide comfort and a release from the regrets that haunt the characters. What do these stories convey about the influence of the hopes and promise of the past on the way people cope with, perceive, and perhaps distort the reality of the present?

5. Wolff explores the relationship between parents and children in many of the stories. How do stories like "Flyboys," "Sanity," "Powder," and "Nightingale" illustrate the complicated emotional connections between parents and children? Does Wolff portray their conflicts and misunderstandings in a balanced, sympathetic way? How would you characterize Wolff’s view of the power parents exercise, knowingly or inadvertently, on their offspring?

6. "The Rich Brother" and "The Night in Question" feature young men searching unsuccessfully for spiritual meaning in their lives. What similar traits do Donald ("The Rich Brother") and Frank ("The Night in Question") exhibit? What do the reactions of their siblings to their idiosyncratic behavior reveal about the mixture of love, guilt, and frustration that often informs relationships within a family? Why is Pete unable to accept and reconcile with Donald, while Frances is sure she can "bring [Frank] around" [p. 249]?

7. The narrator in "Next Door" says about his neighbors, "I think about the life they have" and how it goes on and on, until it seems like the life they were meant to live. Everybody always says how great it is that human beings are so adaptable, but I don’t know. . . . It’s awful what we get used to" [p. 19]. To what degree do the characters Wolff depicts passively accept (or adapt to) the circumstances of their lives? What happens to characters that break the rules or defy old patterns? Consider such stories as "In the Garden of the North American Martyrs," "Nightingale," and "Down to Bone" in your discussion.

8. "Bullet in the Brain" presents the surprising thoughts and images running through the head of a dying man. Discuss the significance of the narrator’s declaration that, "It is worth noting what Anders did not remember, given what he did recall?" [p. 266]? How does it relate to the other stories in the collection?

9. What does the collection’s title Our Story Begins imply about Wolff’s approach to writing short stories? In what ways do the stories embody the sense that life’s experiences, both ordinary and extraordinary, are part of a continuum? Do the characters’ histories and their reactions to the situations in which they find themselves provide insights into what the future might bring? Choose several stories and share your thoughts about what happens next.

10. Wolff has said, "If there’s a moral quality to my work, I suppose it has to do with will and the exercise of choice within one’s will. The choices we make tend to narrow down a myriad of opportunities to just a few, and those choices tend to reinforce themselves in whatever direction we’ve started to go, including the wrong direction" (The Believer, May 2005). How do stories like "The Chain," "Hunters in the Snow," "A White Bible," and "The Benefit of the Doubt" incorporate and illuminate Wolff’s statement? In these and other stories, are there moments of decision that are particularly telling or powerful?

Tobias Wolff is the author of seven previous books and the editor of The Vintage Book of American Short Stories. Among his honors are the PEN/Malamud Award and the Rea Award, both for excellence in the short story, the Los Angeles Times Book Prize, and the PEN/Faulkner Award. He lives in northern California and teaches at Stanford University.

Tobias Wolff books available in Vintage Paperback:
Old School; The Night in Question; In Pharaoh’s Army; Back in the World; The Vintage Book of American Short Stories (editor).
Learn More About Our Story Begins
print

Lost in the Funhouse
John Barth

An Albany Trio
William Kennedy
Back to Top