After the Fire, a Still Small Voice Reader’s Guide 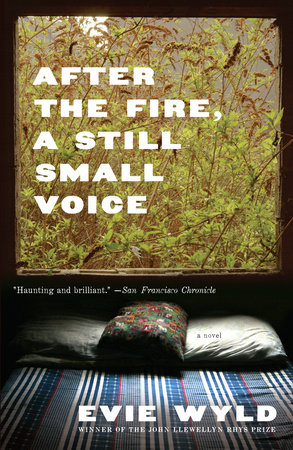 After the Fire, a Still Small Voice Reader’s Guide

print
After the Fire, a Still Small Voice Reader’s Guide

The questions, discussion topics, and suggestions for further reading that follow are designed to enhance your group’s discussion of After the Fire, a Still Small Voice, the stunningly accomplished debut novel from Evie Wyld.

After the Fire, a Still Small Voice illuminates the ties that bind men together and the wars, both personal and national, that drive them apart. From Canberra to the small beach town of Mulaburry comes Frank Collard, trying to put behind him painful memories–including the recent and turbulent departure of the woman he loves. Fifty years back, Leon Collard lives a quiet life in Sydney with his immigrant parents, who run a local bakery. But when Leon’s father enlists to fight in the Korean War and returns a broken man, the family crumbles. Years later, Leon runs into his generation’s war and, devastatingly, becomes a conscripted soldier in Vietnam.

As these two story lines unfold, we learn how Frank’s and Leon’s lives are intertwined. Set in a place where the land is old but the wounds are fresh, After the Fire, a Still Small Voice powerfully explores the inescapable past.

1. In many ways, After the Fire, a Still Small Voice is about love stories: Frank’s grandparents’, his parents’, and his own relationship with Lucy. What do you make of these relationships? What do they say about what is possible between two people, and if there is a price to be paid for love?

2. What part does gender play in the novel? Are the women portrayed differently from the men? If so, in what particular ways?

3. The land and the sea play intimate roles in the lives of all the characters. Have you been to Australia, or any place that reminds you of what you read? Does Wyld capture the essence of the land? How do you think it shapes the characters?

4. Discuss the style of the writing: Did Wyld succeed in expressing the tone of the story in your view? What is that tone? What did you think of her use of simile, specifically with animals and fruit, to describe characters and their actions?

5. Why do you think Wyld chose to make Leon’s father a baker? Is it a profession that fits his character, and Leon’s? How did you react to Frank’s stating that he never understood why his father was a baker, since he was so bad at it?

6. Friendships are hard-fought in the novel, and formed through war and circumstance, with the exception of Frank’s with Bo Flowers. What do you think of Bo? Why doesn’t Frank decide to run off with him? Is the scene where Bo gets into bed with Frank significant?

7. The town where Frank lives is haunted by the disappearance of Joyce Mackelly, and the eventual discovery of her jawbone. The Haydons lose their daughter to leukemia. Leon’s parents abandon him, never knowing he is off at war. How does the loss and abandonment of children affect the narrative?

8. Compare and contrast the two men’s escapes: Leon traveling across the desert and his time at the campsite with other vets; Frank returning to the cabin to which his grandparents originally retreated. How do these journeys mirror or diverge from each other? What do the men’s choices say about their personal histories?

9. What is Sal’s role in the novel, and how is her journey into the bush different from Leon’s and Frank’s?

10. Race is an undercurrent throughout the novel, and occasionally an overt issue. What does it mean that Leon’s parents were Belgian Jews? How is their struggle for a homeland related or separate from the tension between Aboriginal and white Australians?

11. Neither, Leon’s father, Leon, nor Frank have any siblings. Do children without brothers and sisters carry a bigger burden? Sal is, through the loss of her sister, also an only child. How is her experience and relationship with her parents different or similar to the men’s relationships with their parents?

12. Do Leon and his father feel differently about their service, with Leon drafted and his father a volunteer? What emotions do we see in his father’s letters home? What are your own experiences with war? Did the novel help you explore any of your feelings about war, about servicemen and -women, about your own history?

13. Both Frank and Leon hear sounds that seem to follow them–a hiss, a growl, a rustle in the bush. Are they real or imagined noises? Why do you think they hear them?

14. Leon takes photos of himself after his parents leave him and throughout his time in Vietnam. Why do you think he feels the need to do this? Discuss the photographs he takes during the war, and what you think they mean to him. Why does he keep them afterward in an album?

15. The title comes from a biblical verse, which is referenced in several different places in the novel: “After the Earthquake, a fire” (on the lighter that Leon buys, p. 179); “AFTER THE FIRE A STILL SMALL VOICE” (an embroidery that Leon makes, p.235); “After the wind, an earthquake” (Leon waking himself during his journey into the desert, p. 263). Discuss the uses of the title, and what meaning it has for Leon, for Frank, and for the book as a whole.

16. Leon leaves the other vets when they murder a cow who has a calf. When he thought about being a father he “worried he wouldn’t love the calf enough” (p. 290). How is the cow’s death related to his becoming a parent? What do these two scenes suggest about Leon’s capacity for love?

17. Frank said in the beginning that there are “things that needed to be forgotten about” (p. 4). What does the novel suggest about forgetting? Is it possible? Is it necessary? How does Frank’s statement connect to Bob’s much later, that “there are some things you can’t get away from. . . . And that’s the pity” (p. 175).

18. Frank speaks with Leon’s new wife about forgiveness. She believes in biblical forgiveness; Frank believes in the forgiveness between men, between child and parent. Has Frank forgiven his father? Why does he leave without saying good-bye? Does Frank’s departure suggest that some breaks are unfixable? Are there some things that are unforgivable?

19. The novel goes back and forth between Leon and Frank, but never tells their story together. What do you think about this? What do you imagine their history was like? Would it even be possible to tell the story of their relationship, or would there always be something missing and forever misunderstood between them? What is your own relationship like with your parents? Did the novel, which explores the losses that families bear (sickness, murder, trauma, abuse, or the failure of love for whatever cause), change your understanding of your own family?

20. Do you think Frank has changed by the end of the novel, and, if so, why and in which ways? What do you think of Lucy’s choices regarding her relationship with Frank? Both Frank’s and Leon’s stories close on a note of grace–why do you think Wyld chose these endings for each story line?

Evie Wyld grew up in Australia and London, where she currently resides. She received an M.A. in Creative and Life Writing at Goldsmiths, University of London, and in May 2008 was featured as one of Granta’s New Voices.

Tom Bissell, The Father of All Things; Ron Carlson, Five Skies; Ernest Hemingway, The Nick Adams Stories; David Malouf, An Imaginary Life; Tim O’Brien, The Things They Carried; Per Petterson, Out Stealing Horses; Rachel Seiffert, Afterwards
Learn More About After the Fire, a Still Small Voice
print
Back to Top