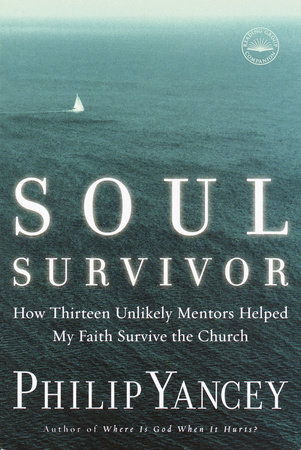 1. RECOVERING FROM CHURCH ABUSE
Philip Yancey says he "spent most of [his] life in recovery from the church" (page 1). And he is candid about the racist views he acquired in a society and church that were pervaded by prejudice and legalism. Talk about what, if anything, made you begin to wonder about the truth of things you learned in church. What feelings and emotions have marked your questioning?

Did you at any point experience a contradiction between the church’s teachings and its actions?

What denomination were you raised in? What are your happiest memories of church? The saddest, the most painful?

Yancey talks about people like millionaire Millard Fuller, who abandoned his life of luxury to found an organization to build housesfor people who cannot afford them (page 8). How does such willingness to live one’s faith go against the grain of a secular world? What role does the church play in who you are today?

2. MARTIN LUTHER KING, JR.
Philip Yancey describes growing up in the apartheid conditions of the South in the1950s and 1960s (page 13). Even if we have not grown up in such an obviously racist climate, few of us escape some form of it. What racial assumptions did you grow up with? What made you begin to understand them as something other than "right" or "normal"?

Martin Luther King, Jr., now stands ac cused of personal moral flaws, yet he was a powerful agent for equality and change. How can we reconcile the two sides of his character? Does one side somehow negate or lessen the other?

Can you think of other men and women with seemingly contradictory public and personal behaviors? What makes you forgive or accept such a duality?

Does accepting questionable moral practices in a leader weaken the moral fabric of society?

What is the difference between passivity and nonviolence? Do you see a place for nonviolence in the contemporary world? Why or why not?

3. G. K. CHESTERTON
C. S. Lewis wrote: "A young man who wishes to remain a strong atheist cannot be too careful of his readingÓ (page 44). What does this statement mean to you? Have you been exposed to such transforming reading?

Yancey’s brother reacted to their confining upbringing by embarking on a "grand quest for freedom." His brother’s failures showed Yancey "the destructive power of casting off faith with nothing to take its place" (page 44). Have you been through such a freedom quest? Talk about the relationship of faith and freedom. Why is freedom such a frightening concept for some people?

Nature contains both majestic beauty and unspeakable cruelty. What does Chesterton mean when he said, "Nature is not our mother;
Nature is our sister"? (page 51)

Why do you think we experience pleasure? What role does it play in God’s creation? Why does the church focus so strongly on the dangers of pleasure?

Chesterton weighed three hundred to four hundred pounds (page 56), showing one example of how a sensual pleasure such as eating may ultimately be destructive. How can we savor pleasure and avoid destructive excesses?

Chesterton propounded faith with great wit. How would Christians of today benefit from Chesterton’s sense of humor?

4. DR. PAUL BRAND
From Paul Brand, Philip Yancey learned, "It is indeed possible to live in modern society, achieve success without forfeiting humility, serve others sacrificially, and yet emerge with joy and contentment" (page 67). Do you believe this kind of life is attainable and desirable? What makes a person who could have fame, wealth, and prestige choose a life of anonymity and scarcity? Can you think of such models? Is this model inspiring or intimidating?

Yancey acknowledges that the problem of pain has been a theme in his work. How would you define this problem? How can we reconcile the idea of a loving God with the existence of pain in the world? Can you think of reasons to be grateful for pain? How can we view pain as a gift?

Do you believe God is trustworthy? Why? Why not?

Paul Brand learned from his parents "that love can only be applied person-to-person" (page 75). Why does it often seem easier to care about groups than individuals?

What did Jesus mean when he said, "Happy are they who bear their share of the world’s pain: In the long run they will know more happiness than those who avoid it"? (pages 85-86)

5. DR. ROBERT COLES
"Vicariousness is, after all, a writer’s business,"Yancey writes (page 89). How does a reader know when to trust the vicarious experience a writer presents?

Six-year-old Ruby Bridges was escorted daily through an angry mob, "attending a vacant school to sit alone all day in her classroom" (page 97). Imagine yourself in her place. In her parents’ place. What gives a person the strength to endure such an ordeal? What would you say to a parent who allowed a child to endure an experience like this? Have you ever had to act courageously for a cause?

Robert Coles believed that, for the poor, religion "was no crutch but rather a source of inspiration" (page 102). Karl Marx said, "Religion is the opiate of the masses." What makes one view more convincing to you than the other?

What do we learn from Jesus’ parable of the prodigal son in which the father loves the errant and the dutiful son equally? How would you advise a parent in a similar situation, with one "good" child and one "bad" child? Where does the concept of "tough love" fall in such a scenario?

Do you think wealth makes people less compassionate? What do we gain/lose by our relative affluence?

6. LEO TOLSTOY AND FEODOR DOSTOEVSKY
Through Tolstoy and Dostoevsky, Yancey developed an "understanding of the tension between Christian ideals and reality" (page 121). Can you identify beliefs and behaviors that create this gap? What figures, if any, have helped you come to terms with life as Christians say it should be lived and life as it is lived?

Tolstoy’s desire to live his faith caused his family pain and suffering. Talk about the dangers and virtues in having ideals you cannot live up to.

What does it take to say "attack me rather than the path I follow"? (pages 131?132) How can you separate one from the other?

Dostoevsky lived through a mock execution that changed his life. Talk about near-death experiences or national catastrophes or any traumatic event that may have changed you somehow.

Through Dostoevsky, Yancey came "to understand grace, not as a theological concept but a living reality worked out in a world of ungrace" (page 139). What do "grace" and "ungrace" mean to you?

At the beginning and end of this chapter, Yancey poses a basic question about faith: "Why doesn’t it work?"How would you answer or refute him?

7. MAHATMA GANDHI
Gandhi said that a leader "is only a reflection of the people he leads" (page 157). Think about leaders in your life, not only national and state leaders, but the leaders in your community. What do they reflect about society?

In a world that is global and materialistic, how can one person make a difference? What prevents most of us from exerting the power
of a Gandhi?

How would your life change if you renounced material possessions or radically simplified your life? How does the need for possessions
shape us as individuals and as a society?

What makes a person a saint? What happens when a saint appears in our midst?

What are the similarities between Martin Luther King, Jr., and Mahatma Gandhi? The differences? Is one more appealing to you than the other? Why?

8. DR. C. EVERETT KOOP
Ronald Reagan appointed Koop surgeon general on the basis of his strong antiabortion position. Yet Koop became the center of controversy when he announced that "the scientific studies do not provide conclusive data about the health effects of abortion on women" (page 193). How can this statement be reconciled with his long-standing and continued opposition to abortion? How do you respond when apparent facts do not support your beliefs or your church’s teachings?

Koop had to learn to distinguish the immoral from the illegal (page199). How does a person of faith accomplish this?

How is it possible to hate the sin and love the sinner? Is sin an outdated concept?

9. JOHN DONNE
When he thought he was dying, John Donne struggled with the meaning of suffering in Devotions. Why do you think God lets us suffer? What can we learn from God’s becoming human and enduring the pain and humiliation of the Crucifixion?

Even if you believe the Incarnation is a myth, why has this story retained such a powerful hold on human imagination for two millennia?

Why do we take health for granted and look for meaning in suffering?

Many of us grew up with very specific notions of life after death. Do you have a vision of an afterlife? What is heaven like? Hell? How has your view evolved since childhood?

10. ANNIE DILLARD
Philip Yancey was raised in a strict, fundamentalist milieu, Annie Dillard in a more laid-back social one. Yet both have made a lifelong journey of spiritual inquiry. How does childhood experience shape adult faith?

Talk about your experience of nature. What have you learned from it?

What books have guided you on your faith journey? What do "secular" books offer that overtly "religious" books do not? And, vice versa, what do religious books offer that secular ones do not?

Annie Dillard enjoys some aspects of conservative Christian worship. What kind of religious services are you drawn to? What makes you uncomfortable? What can you learn from experiencing either sort?

Buecher believed "that God is alive and present in the world" (page 252). How do you perceive God interacting with history? What is the point of searching for God in history?

A number of people Yancey writes about in this book, including himself, made deliberate attempts to simplify their lives. What are the challenges inherent in such a decision? What are the gains? The losses?

At a critical juncture–the death of a loved one, the loss of a job, a debilitating illness–a friend expresses trust in God. What is your response?

12. SHUSAKU KUENDO
What do you remember of your fears during the Cold War? If you are too young to remember, how do you respond to stories about fear of the atomic bomb, the Cuban missile crisis, the Communists’ torture of their enemies? What are we afraid of today? What do our fears tell us about the world we live in?

Endo was drawn to the stories of the Japanese Christian martyrs (page 276). How have stories of martyrdom affected you? How has your response changed over time?

What makes a person an "outsider"? How do we identify people who "are not one of us"? How do we treat them?

Yancey suggests that Christianity’s emphasis on father love prevented the Japanese from embracing it as eagerly as many other Western phenomena. Some contemporary theologians oppose language that attributes gender to God. How has your understanding of God’s gender–male or female–informed your understanding of the divine?

Why do "writers of faith have a tendency to sanitize their characters" (page 291) when so many great characters in the Bible are deeply flawed?

13. HENRI NOUWEN
What do you think of a man like Nouwen who abandoned a life of celebrity and acclaim to take responsibility for the care of a profoundly disabled man?

Where many would see downward mobility, Nouwen saw "inward mobility" (page 311). How can abandoning a public life of teaching in favor of a much more private life in a small community be seen as embracing God’s gifts rather than abandoning them?

Learn More About Soul Survivor
print
Back to Top