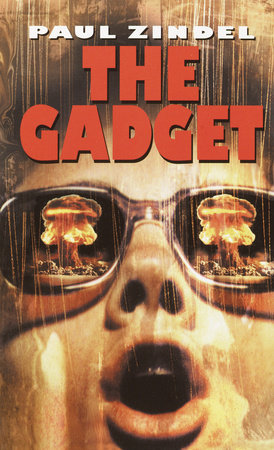 Set in Los Alamos, New Mexico, during World War II, 13-year-old Stephen Orr places himself in grave danger as he tries to uncover the secret of The Gadget, a project his father is developing for the United States government.

In 1945, Stephen Orr leaves his mother in war-torn London to join his father, a physicist, in Los Alamos, New Mexico. Though Stephen knows that his father is involved in a top-secret mission for the United States government bearing the code name The Gadget, he doesn’t understand the magnitude of the project. As Dr. Orr becomes increasingly obsessed with his work, Stephen begins to investigate The Gadget, and finds himself the target of a dangerous spy ring. He desperately wants friends, and enjoys the company of Alexei Nagavatsky, an older teen who lives with his family on base, but when Alexei’s father turns out to be a Russian spy, Stephen no longer knows whom to trust. Lonely and frightened, Stephen longs for a close relationship with his father, and along the way, discovers the truth surrounding his father’s work.

Paul Zindel is the award-winning author of The Pigman (1968), a novel labeled a young adult classic by critics and young readers. In 1971, he was awarded the Pulitzer Prize for Drama for The Effect of Gamma Rays on Man-in-the-Moon Marigolds. He has written more than 25 books for young readers, several Broadway plays, and numerous screenplays. Zindel was the recipient of the 2002 Margaret A. Edwards Award for his lifetime contributions to young people’s literature.

Have students read the statement from President Harry Truman that he issued on August 6, 1945, after the United States bombed Hiroshima (See Internet Resources). Discuss how the atomic bomb was considered a race against the Germans. Describe the partnership between the United States and Great Britain during this time period.

Trust–Ask students to define trust. Stephen is told that he is to trust no one. Discuss how difficult it is to live without trust. What makes Stephen think that he can trust Alexei Nagavatsky? Why does Sewa, Dr. Orr’s housekeeper, warn Stephen about Alexei? How does Stephen betray his father’s trust? What lessons does Stephen learn about trust, betrayal, and truth?

Anger–Have students trace Stephen’s fits of anger throughout the novel. How does life on the Los Alamos base contribute to his anger? Describe Stephen’s anger when he finds out about The Gadget. How does Dr. Orr’s explanation of the project outrage Stephen? Dr. Orr tells Stephen, “We were all told we could help the war end.” (p. 149) Discuss whether the government was deceptive with the scientists. How does Dr. Orr avoid being angry toward the government?

Secrets–Discuss why Stephen is so obsessed with finding out the secret mission at Los Alamos. Why does Sewa feel that Alexei has secrets? What is Stephen’s reaction when he discovers his dad’s secret project? How does Dr. Orr deal with the knowledge that Stephen knows the secret?

Security–Discuss why Los Alamos is called “a town that doesn’t exist.” (p. 16) What measures does the government take to make Los Alamos safe and secure for the scientists and their families? How does the government’s security system fail? How does Stephen break the security rules? Why is it difficult for Stephen to live under such strict rules? Discuss how the Nagavatsky family passed security checks at Los Alamos. Compare and contrast the security measures at Los Alamos during World War II to the homeland security issues in the United States today.

Family–Describe Stephen’s relationship with his father. Discuss his feelings when his father doesn’t come to meet him at the airport. Why is Stephen so angry when his father reaches out to shake his hand upon his arrival in Los Alamos? Cite evidence in the novel that Stephen wants to be close to his father. Why is it so difficult for Dr. Orr to show affection to his son? How might Stephen describe the Nagavatsky family? Discuss how Stephen’s relationship with his father changes at the end of the novel.

Stephen pastes articles about President Franklin D. Roosevelt and Winston Churchill in his journal. Research these two men, and find out why Stephen is so intrigued by them. Write a tribute to Roosevelt that Stephen might deliver at his school on the day that Roosevelt died.

Social Studies–Hirohito, the Japanese emperor during World War II, has been described as Japan’s Hitler. Have students research Hirohito and Hitler and write a short paper that compares the power and the malevolence of the two men.

Hiroshima and Nagasaki were destroyed on August 6 and 9, 1945, by the first atomic bombs used in warfare. Ask students to research the destruction caused by these bombings. How did these events start what has become known as the Atomic Age? Find pictures on the Internet, articles about these events, quotes from Americans after the bombings, and newspaper headlines about the atomic bomb and create a bulletin board collage titled, “The Atomic Age.”

Discuss the relationship between Japan and the United States in the 1940s and today.

Drama–Have students act out a radio interview with the scientists at Los Alamos when the United States bombed Hiroshima and Nagasaki. Then, have them enact an interview with Stephen and other young adults living on base.

Art–Stephen collects model planes, and war-machine trading cards. Have students research World War II fighter planes on the Internet. Then have them illustrate fighter plane cards that Stephen might have in his collection.

J. Robert Oppenheimer was awarded the Fermi Prize in 1963. Research the work of Enrico Fermi and find out why an award is presented in his honor. Find out other scientists who have won this award. Ask students to conduct further research on one of these scientists. Then have them create a time line that outlines the scientist’s contribution to science.

Career Exploration–Stephen’s father is a physicist who helped develop the atomic bomb. What other types of scientists might be employed by the government? Discuss why the work of scientists is often top secret. Find out the various career paths for someone who is interested in physics.

*“Zindel combines a canny mix of innocence and intelligence, and thus allows readers to examine carefully a complex set of questions about moral and political issues and responsibilities.”–Starred, Publishers Weekly

Hiroshima Bombing:
Immediate Press Release
August 6, 1945
www.nuclearfiles.org/chron/40/pr_us_450806.html
Text of the statement made by President Harry S. Truman after the bombing of Hiroshima.


Learn More About The Gadget
pdf

Hunt for the Bamboo Rat

House of the Red Fish

A Place to Belong

In The Face of Danger

The Ransom of Mercy Carter

A Countess Below Stairs
Back to Top