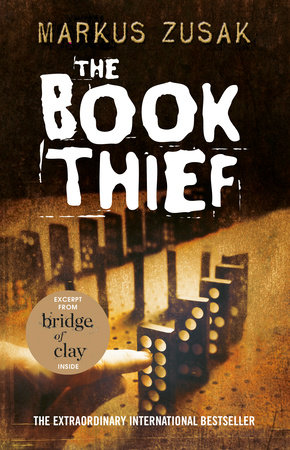 Liesel Meminger is only nine years old when she is taken to live with the Hubermanns, a foster family, on Himmel Street in Molching, Germany, in the late 1930s. She arrives with few possessions, but among them is The Grave Digger’s Handbook, a book that she stole from her brother’s burial place. During the years that Liesel lives with the Hubermanns, Hitler becomes more powerful, life on Himmel Street becomes more fearful, and Liesel becomes a full fledged book thief. She rescues books from Nazi book-burnings and steals from the library of the mayor. Liesel is illiterate when she steals her fi rst book, but Hans Hubermann uses her prized books to teach her to read. This is a story of courage, friendship, love, survival, death, and grief. This is Liesel’s life on Himmel Street, told from Death’s point of view.

Markus Zusak has asserted himself as one of today’s most innovative and poetic novelists. With the publication of The Book Thief, he is now being dubbed a “literary phenomenon” by Australian and U.S. critics. Zusak is the award-winning author of four previous books: The Underdog, Fighting Ruben Wolfe, Getting the Girl, and I Am the Messenger, recipient of a Michael L. Printz Honor. He lives in Sydney, Australia. For more information on the author, visit www.markuszusak.com

DISCUSSION QU ESTIONS
• Discuss the symbolism of Death as the omniscient narrator of the novel.
What are Death’s feelings for each victim? Describe Death’s attempt to resist
Liesel. Death states, “I’m always fi nding humans at their best and worst.
I see their ugly and their beauty, and I wonder how the same thing can be
both.” (p. 491) What is ugly and beautiful about Liesel, Rosa and Hans
Hubermann, Max Vandenburg, Rudy Steiner, and Mrs. Hermann? Why is
Death haunted by humans?
• What is ironic about Liesel’s obsession with stealing books? Discuss other
uses of irony in the novel.
• The Grave Digger’s Handbook is the fi rst book Liesel steals. Why did she
take the book? What is signifi cant about the titles of the books she steals?
Discuss why she hides The Grave Digger’s Handbook under her mattress.
Describe Hans Hubermann’s reaction when he discovers the book. What
does the act of book thievery teach Liesel about life and death? Explain
Rudy’s reaction when he discovers that Liesel is a book thief. How does
stealing books from the mayor’s house lead to a friendship with the mayor’s
wife? Explain how Liesel’s own attempt to write a book saves her life.
• Liesel believes that Hans Hubermann’s eyes show kindness, and from
the beginning she feels closer to him than to Rosa Hubermann. How does
Hans gain Liesel’s love and trust? Debate whether Liesel is a substitute for
Hans’s children, who have strayed from the family. Why is it so diffi cult for
Rosa to demonstrate the same warmth toward Liesel? Discuss how Liesel’s
relationship with Rosa changes by the end of the novel.
• Abandonment is a central theme in the novel. The reader knows that Liesel
feels abandoned by her mother and by the death of her brother. How does
she equate love with abandonment? At what point does she understand why
she was abandoned by her mother? Who else abandons Liesel in the novel?
Debate whether she was abandoned by circumstance or by the heart.
• Guilt is another recurring theme in the novel. Hans Hubermann’s life was
spared in France during World War I, and Erik Vandenburg’s life was
taken. Explain why Hans feels guilty about Erik’s death. Guilt is a powerful
emotion that may cause a person to become unhappy and despondent.
Discuss how Hans channels his guilt into helping others. Explain Max
Vandenburg’s thought, “Living was living. The price was guilt and shame.”
(p. 208) Why does he feel guilt and shame?
• Compare and contrast the lives of Liesel and Max Vandenburg. How does
Max’s life give Liesel purpose? At what point do Liesel and Max become
friends? Max gives Liesel a story called “The Standover Man” for her
birthday. What is the signifi cance of this story?
• Death says that Liesel was a girl “with a mountain to climb.” (p. 86)
What is her mountain? Who are her climbing partners? What is her greatest
obstacle? At what point does she reach the summit of her mountain?
Describe her descent. What does she discover at the foot of her mountain?
• Hans Junior, a Nazi soldier, calls his dad a coward because he doesn’t
belong to the Nazi Party. He feels that you are either for Hitler or against
him. How does it take courage to oppose Hitler? There isn’t one coward
in the Hubermann household. Discuss how they demonstrate courage
throughout the novel.
• Describe Liesel’s friendship with Rudy. How does their friendship change
and grow throughout the novel? Death says that Rudy doesn’t offer his
friendship “for free.” (p. 51) What does Rudy want from Liesel? Discuss
Death’s statement, “The only thing worse than a boy who hates you [is] a
boy who loves you.” (p. 52) Why is it diffi cult for Liesel to love Rudy?
Discuss why Liesel tells Mr. Steiner that she kissed Rudy’s dead body.
• How does Zusak use the literary device of foreshadowing to pull the reader
into the story?
• Liesel Meminger lived to be an old woman. Death says that he would
like to tell the book thief about beauty and brutality, but those are things
that she had lived. How does her life represent beauty in the wake of
brutality? Discuss how Zusak’s poetic writing style enhances the beauty
of Liesel’s story.

“Bri ll iant and hugely ambitious. . . .
It’s the kind of book that can be l ife ch ang ing.”
–TH E N EW YORK TIM ES
“The Book Thief deserves a place on the same shelf with
The Diary of a Young Girl by Anne Frank and Elie Wiesel’s
Night. It seems poised to become a classic.”–USA TODAY
★ “Beautiful and important.”–KIRKUS REVI EWS, Starred

A CONVSERSATION WITH
MARKUS ZUSAK
Q: Wh at inspired you to write about a hu ng ry, i ll iterate g irl who h as
such a desire to read th at sh e steals books?
A: I think it’s just working on a book over and over again. I heard stories of
cities on fi re, teenagers who were whipped for giving starving Jewish people
bread on their way to concentration camps, and people huddled in bomb
shelters. . . . But I also had a story about a book thief set in my hometown
of Sydney. I just brought the two ideas together and realized the importance
of words in Nazi Germany. I thought of Hitler destroying people with
words, and now I had a girl who was stealing them back, as she read books
with the young Jewish man in her basement and calmed people down in
the bomb shelters. She writes her own story–and it’s a beautiful story–
through the ugliness of the world that surrounds her.
Q: How did you decide to make Death th e narrator of th e book?
A: With great diffi culty! I thought, “Here’s a book set during war. Everyone
says war and death are best friends.” Death is ever-present during war, so
here was the perfect choice to narrate The Book Thief. At fi rst, though,
Death was too mean. He was supercilious, and enjoying his work too
much. He’d say extremely creepy things and delight in all the souls he was
picking up . . . and the book wasn’t working. So I went to a fi rst-person
narration, a simple third-person narration . . . and six months later I came
back to Death–but this time, Death was to be exhausted from his eternal
existence and his job. He was to be afraid of humans–because, after all, he
was there to see the obliteration we’ve perpetrated on each other throughout
the ages–and he would now be telling this story to prove to himself that
humans are actually worth it.
Q: Liesel h as an u ncanny u nderstanding of peop le and an abi l ity to
befriend those who most need comp anionshi p . Who do you think
is Liesel’s most u nforg ettable friend?
A: For me it’s Rudy, but a lot of people will tell me it’s Hans Hubermann, Max,
the mayor’s wife, or even Rosa Hubermann. Rudy is just my favorite character.
From the moment he painted himself black and became Jesse Owens, he was
my favorite. Liesel kissing his dusty, bomb-hit lips was probably the most
devastating part of the book for me to write. . . . I was a mess.
On the other hand, I’m also drawn to all of the relationships Liesel forms,
even her reading with Frau Holtzapfel, and the return of her son. Even
Ludwig Schmeikl–the boy she beats up on the playground and reconciles
with at the book burning . . . I think the relationship with Rosa is the most
unexpected, though. The moment when she sees Rosa with the accordion
strapped to her (when Hans is sent to the war) is when she realizes exactly
how much love her foster mother is capable of.
Q: Your use of fig urative lang uag e seems natural and effortless.
Is this something th at you h ave to work to develop, or is it
innately a p art of your writing style?
A: I like the idea that every page in every book can have a gem on it. It’s probably
what I love most about writing–that words can be used in a way that’s like
a child playing in a sandpit, rearranging things, swapping them around.
They’re the best moments in a day of writing–when an image appears that
you didn’t know would be there when you started work in the morning.
At other stages, it takes time. It took three years to write this book, and some
images remained from start to fi nish, but others were considered and reconsidered
dozens of times, if not more. Often, to keep the workday fl owing, I’ll
continue writing the story and then come back later to develop an image that
hasn’t worked from the outset. I might even take it out completely.

You’ll Be the Death of Me
Karen M. McManus

A Sky Beyond the Storm
Sabaa Tahir

Skin of the Sea
Natasha Bowen

The Gilded Ones
Namina Forna

The Secrets of the Immortal Nicholas Flamel: The Lost Stories Collection
Michael Scott

No Beauties or Monsters
Tara Goedjen

Tess of the Road
Rachel Hartman

One of Us Is Lying (TV Series Tie-In Edition)
Karen M. McManus

Huda F Are You?
Huda Fahmy

Salaam, with Love
Sara Sharaf Beg
Back to Top