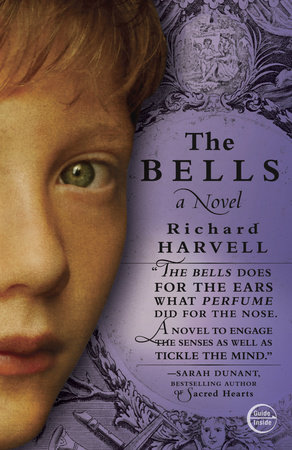 1. Harvell begins his novel with a letter from the narrator’s son Nicolai, in which we learn a great deal, including that Nicolai never knew his mother and that in 1806 Moses is a famous singer. How does this affect our experience of the novel? How would the novel be different with these two pages torn out?

2. Moses’ years at the Abbey of St. Gall are tumultuous and fraught with pain. But would you say he wishes Nicolai had never brought him there? What does he gain from the abbot and abbey? Aside from the obvious in his castration, what does he lose?

4. In an interview, Richard Harvell says, “I first planned Nicolai and Remus, as two cruel monks, and then, as I wrote, they just wouldn’t be mean, no matter what I tried. I had to make them good. I am very thankful for that.” Why are Remus and Nicolai so important to Moses’ story? Why do you think Harvell is so thankful that they are not ‘mean’?

5. “This is not magic,” Harvell writes (14). “He cannot hear through mountains or to the other side of the earth. This is merely selection. The selection of sounds, the dissection of sounds, is something he can do like no other. This his mother and her bells have gifted him.” How would you describe Moses extraordinary hearing ability? Is this magic? How
does Moses’ hearing influence his destiny?

6. While Harvell uses many visual images in the book, there are many descriptive passages relying on sound. “The one-eyed idiot’s howling, the rattle of the coppers in the leper’s wooden bowl, the creak of the warped wagon wheel, the hissing of a black cat plucked of half its fur by some disease” (217). How does description through sound add to the novel?

7. Gaetano Guadagni is one of the many historical figures in the novel. Is he a villain, or is he, as he always claims to be, Moses’ “fratello” (brother)?

8. One reviewer claimed that The Bells “earns its operatic tone” (Kirkus Reviews). What might be meant by ‘operatic tone’? In what other ways is the novel like an opera?

9. The narration is told in the first person, by the mature Moses, but told through the eyes of a child and, later, a young castrato. How is the novel influenced by the two perspectives? When does it swerve toward one or the other?

10. “I promise you as your faithful witness,” Moses swears (page 14). But does Moses always tell the complete, unbiased truth? Here is one example when his bias leaks through: “In this village I was born (may it burn to the ground and be covered by an avalanche)” (page 6). Where else does this happen?

12. The child Nicolai was destined for great fortune as a Riecher. So why does Moses kidnap his “son”? Should we blame him for this decision?

13. In his nocturnal wanderings in St. Gall, Moses understands that he has traded the ability to love, and to be loved, for the ability to sing like an angel. “All at once, the musico’s exchange made sense. We had given up this song of union for a song that we must sing alone” (page 163). How does singing replace love? And how does it not?

Learn More About The Bells
print

The Movement of Stars

Parrot and Olivier in America
Back to Top