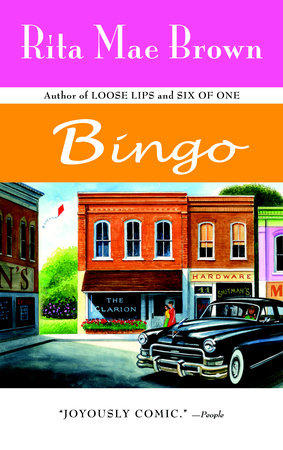 The third book in Rita Mae Brown’s beloved Hunsenmeir trilogy, Bingo takes readers back to Runnymede, Maryland, a small town with the unique designation of being located on both sides of the Mason-Dixon line. It’s 1987, but in the absence of the War Between the States, Runnymede’s residents (sisters Louise and Julia Hunsenmeir in particular) still find plenty to squabble about–including the arrival of dashing, well-heeled newcomer Ed Tutweiler Walters who has the ladies fighting like schoolgirls. While trying to keep the peace and restore order in her family, Nickel Smith also has her hands full with a herculean effort to save the local newspaper from a corporate takeover. Editing the paper has been the most fulfilling work she has ever known, but she may not be able to raise the cash required to save it. The one person with enough business know-how to help her through it is also someone with whom she shares a sizzling secret. With a rollicking twist at the end that will have your reading group cheering, Bingo hits the jackpot.

The questions and discussion topics that follow are intended to enhance your reading of Rita Mae Brown’s Bingo. We hope they will enrich your experience of this endearing novel.

1. What makes Runnymede’s location significant in each of the Hunsenmeir novels? What does the town map indicate about the populations living there? What legacies of north and south affect the cultures residing in these border regions–neither the deep south nor dedicated Yankee territory?

2. What is the effect of watching the novel unfold through Nickel’s eyes? What does she see that other residents don’t? How does her take on Runnymede compare to Juts’s and Wheezie’s?

3. The author’s note mentions newsworthy features of the 1980s. What other elements of the novel were specific to that time period, just as Loose Lips and Six of One evoked previous eras? In what ways is Bingo timeless? Would Nickel’s gender have been an unspoken factor in a commercial loan application in the twenty-first century?

4. Why does the arrival of Verna’s gorgeous uncle, Ed Tutweiler Walters, spark such a deep-seated rivalry between Juts and Wheezie? How are they influenced by their past experiences with love? Why did Ed choose Juts over Wheezie?

5. What does the fox hunt signify to Nickel? Why does it bring out the best in her, and the worst in Ursula?

6. When Foster Adams considers Nickel’s loan request, his regional bank must submit to the policies of the national owners. What has been the result of the small-town transitions described in Bingo? Are local banks, newspapers, or other businesses thriving in any of the small towns in your area? What are the effects of losing local businesses–both in the novel, and in real life? Would a reporter for a nationally owned newspaper receive the sort of training that Nickel gives Michelle?

7. Nickel remembers visiting the press with her father, Chessy, when she was just six years old. How is her life shaped by the memories of her father, both her own and those of the other citizens who used to visit his shop? What did Chessy mean at the end of chapter six when he told Nickel, “The secret of life is that there is no secret”? Did she live by this wisdom?

8. Why can Jackson and Nickel be so compatible as lovers but not as a married couple? Discuss the many types of relationships that form in Bingo, romantic or otherwise. How would humanity experience love and sex differently if Nickel’s Blue Dot Theory were more widely embraced?

9. What does the story of David Wheeler and the cannon say about the eccentricities of Runnymede? What motivates Bucky’s quest for vengeance?

10. Who mothers whom in the relationship between Juts and Nickel? How did you react to Juts’s revelation in chapter 48 that she doesn’t feel like a “real woman” because she never gave birth? What was the significance of the paints that Juts threw away? How are the strongest families formed? What insecurities affect our ability to be good parents?

11. Would you have married Mr. Pierre if you had been in Nickel’s shoes? What makes Mr. Pierre and Nickel great parents?

12. How did your impressions of Mr. Pierre shift throughout the novel? How was he affected by his service in Korea? What accounts for his transformation after he and Nickel set up housekeeping?

13. The novel’s closing words are Nickel’s message to her dad, flown to the heavens on a kite. In what way were Nickel’s experiences with men a reflection of her relationship with her father, in both positive and negative ways?

14. Discuss the novel’s title. Did the weekly bingo games bring greater havoc or unity to the people of Runnymede? What did it mean to the characters for blackout bingo to be outlawed north of the Mason-Dixon line? In the grander scheme of life, who are the big winners in Runnymede? Who are the cheaters? Were you able to sympathize with Wheezie’s belief that a facelift was the key to her happiness?

15. What outcomes had you predicted for Nickel and her family when you read Loose Lips and Six of One? How might the characters from earlier installments, in particular matriarch Cora, have reacted to the modern-day activities of Runnymede? How does family history affect your outlook on your own future?

Upon a Midnight Clear
Catherine Mulvany

Someone to Watch Over Me
Ruth Owen

The Devil and the Deep Blue Sea
Karen Leabo

In Her Day
Rita Mae Brown

From the Streets to the Sheets
Noire

Riley in the Morning
Sandra Brown
Back to Top