The Day of Atonement Reader’s Guide 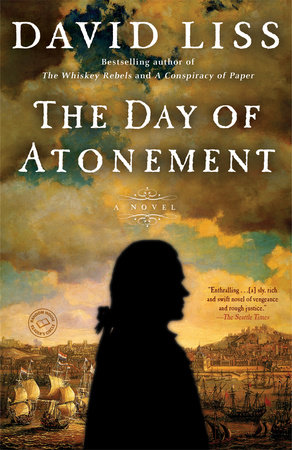 The Day of Atonement Reader’s Guide

A Conversation with David Liss

Random House Reader’s Circle: What was your inspiration for the novel?

David Liss: I first learned about the Lisbon earthquake of 1755 when I took my first eighteenth–century literature class in grad school, and it’s one of those things that always stuck in my imagination. Though it’s not well known by Americans today, it was a consciousness–changing event for eighteenth–century European intellectuals, who couldn’t quite comprehend how one of the world’s great cities could simply cease to exist. Usually when I’m finishing a book, I know exactly what I want to work on next. But after The Twelfth Enchantment, I didn’t have a clear idea, so I decided that maybe it was time to finally look into the earthquake. I began doing a little bit of light research on eighteenth–century Portugal in general to see if there was a story that would draw me in, and I became instantly fascinated with the political corruption, religious injustice, and economic ineptitude of the period. From there, I simply kept doing research until the story began to take shape. Originally I planned to write a sort of post–disaster novel in which I set up events for the earthquake fairly quickly, and then explored the aftermath in the bulk of the book. As I began writing the book, however, it became clear to me that it was Lisbon before the earthquake, not after, that really fascinated me.

RHRC: Sebastiao is an exceptional character in terms of skill, determination, and focus. What made you want to tell his story?

DL: Once I was fairly well steeped in the research for this book, I knew I wanted to write a revenge story, which seemed like a natural narrative for such an unjust society. Sebastiao took shape as I tried to figure out what sort of character would work best for this world. I liked the idea of someone who had been utterly broken by the injustice he’d suffered, so I began working from there. Revenge is always a losing proposition, of course, since it invariably leaves the seeker feeling empty afterward, so I wanted to write about someone who was looking for something more than justice. Sebastiao, troubled as he is, understands that vengeance is a process for him, not necessarily justice against those who have done wrong.

RHRC: The Day of Atonement is a return to historical fiction, after The Twelfth Enchantment, a novel with magical and supernatural elements. Do you find there are major differences between writing historical fiction and writing fantasy? Which do you prefer?

DL: When I write fantasy, it tends to be of the historical variety, which is usually very research–heavy, so there’s really not that much difference. I’m still working within certain limitations of history and culture—-as opposed to the sort of fantasy that takes place in a totally imagined world. I’m not sure if I prefer writing either one. Each has its own pleasures for me. That said, the two genres, in my view, are closely related. When you write about periods of time before film or photography or sound recording, you have to make a lot of guesses about what life was like for your characters. They are often educated guesses, but you are still engaging in world–building and constructing an imaginative world for your reader to inhabit. If the physics and biology of that world are the same as ours, it’s historical fiction; if not, it’s fantasy.

RHRC: What were some of the specific challenges you faced in writing or researching this novel?

DL: The Day of Atonement presented some very specific challenges because Lisbon, as it existed before the earthquake, is almost entirely gone. A great deal of the work I did for this book involved trying to understand what life was like in destroyed Lisbon for people from all the various social strata. The English of this period were highly literate (by contemporary standards) and fascinated with themselves, so eighteenth–century London is extremely easy to research. Lisbon, by contrast, is less well recorded, so there was a lot of archival and detective work involved.

DL: I tend to work from the broad to the particular. When I’m researching a culture I know almost nothing about, as I did with this book, I first look for the very general surveys of the material—-popular histories, or even books for younger readers. I want to understand the basics before I get into specifics, because otherwise I don’t really know what I’m looking at. Once I begin to have a sense of what interests me, I’ll read more scholarly works, and studies of specific people or events, or of cultural movements. From there I go to primary sources: letters, diaries, contemporary travel guides, and whatever else is available. Finally, when I have a near–final version of the book, I visit the place I’m writing about. I find if I go too early in the process, I’m not sufficiently focused; if I go later, I know exactly what I need to look for or at.

RHRC: Benjamin Weaver, the protagonist of several of your other novels, makes an appearance. What made you decide to bring him back? Did it feel strange to be writing about him from a different character’s perspective?

DL: There were certain similarities in the skill sets of the two characters, even though their personalities are very different, so I began to think it might be fun to have Weaver as a minor character in this book. Readers often contact me asking if I plan to write any more novels featuring Benjamin Weaver, and right now I have no intention of doing so, but it was interesting to think about him as an older, more settled figure. I’ve never had any interest in writing an entire novel about an older version of the character, so having him appear as a minor character here allowed me to imagine his life progressing without having to work a full narrative around it.

RHRC: The novel is set during a particularly tumultuous time in politics and religion. Do you see any lessons for the modern world in the realities of that setting?

DL: I tend to believe that every time is a tumultuous time for politics and religion—-which often serve, in my view, as an excuse for, rather than a cause of, aggression and animosity. I’m not sure there is any particularly insightful lesson to take away. There are always going to be those who will misuse and abuse power if given the chance. There are pretty universal occurrences, but I do find it interesting to see how they manifested in the past. Looking at these events through the lens of history can help to defamiliarize, and therefore shed light on, events in our own time.

1. Two big themes of the novel are vengeance and mercy. Do you think the two are mutually exclusive? Can you be both vengeful and merciful at the same time?

2. Discuss the meaning of the title The Day of Atonement.

3. The novel ends before we know how Roberta responds to Sebastiao. What do you imagine she says to him? What would you say to him in her place?

4. Do you see Sebastiao’s concept of justice evolve at all throughout the novel? If so, how, and what do you think prompts the change?

5. Comparing his own deception to Roberta Carver’s, Sebastiao thinks, “The Carvers’ crime against Settewell had been unforgiveable. It was not a slightly unscrupulous take on usual trade—-it was theft, pure and simple. What I intended was, of course, much the same, but my scheme had the virtue of being retaliatory” (page 209). Do you agree with the idea that his actions are somehow more justifiable because they were preceded first by another crime? Is revenge ever justifiable?

6. Which of the characters in this novel do you most identify with, and why?

7. At the start of Chapter 1, Sebastiao declares, “I am not a kind person. . . . If I am a monster, however, I am monster made, not born” (page 19). What does this opening suggest about the nature of goodness and evil? After reading the novel, do you agree or disagree with his declaration?

8. Compare and contrast Roberta and Gabriela. What do you think the two women represent to Sebastiao, and how do you see that change over the course of the novel?

9.  At the end of his final confrontation with Azinheiro, Sebastiao is faced with a very important choice. Were you surprised by the choice he made? In his shoes, do you think you would have made the same one?

10. How do you think your opinion of the characters might change if this were a book of nonfiction, and not a novel?

Learn More About The Day of Atonement
print

A Map of Betrayal
Ha Jin

The Expendables
Leonard B. Scott

The Woman Who Knew Too Much
Tom Savage

The Devil and the Deep Blue Spy
Tom Savage

Cloud of Sparrows
Takashi Matsuoka
Back to Top