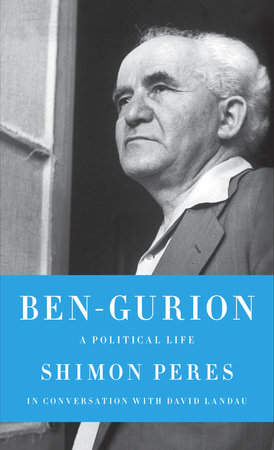 David Ben-Gurion was Israel’s founding father—a Zionist leader who fought for the establishment of the state, and its first prime minister. Shimon Peres, a Ben-Gurion protégé who went on to serve as Israel’s prime minister and (currently) president, offers personal and political insights into this towering figure in modern Jewish history: how he grew up, how his politics developed, and how he defied all odds to create a unified Jewish state.

Early Years
Ben-Gurion was born in Plonsk, Poland, in 1886. He was just 11 years old when the First Zionist Congress was held, but the nascent movement to build a Jewish state had a profound impact on him. He was just 14 when he founded his own Zionist group, and he made aliyah at 19.

1. How were Ben-Gurion’s political views shaped by the time and place where he was raised?

2. European Jews at the time were faced with distinct options for improving their situation. One that Peres describes is assimilation vs. Zionism – blending into European culture or emphasizing Jewish uniqueness. It’s clear that Ben-Gurion chose the latter. But why did he choose it?

3. In addition to Poland and Palestine, Ben-Gurion lived in Constantinople, Salonika, New York, London, and elsewhere, and spent time in Canada, Egypt, the Soviet Union, and much of Europe. How did his first-hand view of Diaspora life influence his Zionism? How did his early travels abroad affect his later foreign policy?


Zionism
Ben-Gurion founded, organized, and led a number of Zionist groups – in Palestine and internationally. Whether he was organizing labor or encouraging aliyah, he simultaneously strove to take bold and clearly defined stands but also to build bridges to other groups with differing agendas.

1. While other Zionist leaders, from Herzl to Jabotinsky, viewed their movement in relation to other nationalist movements sweeping Europe, Ben-Gurion saw the movement as unique. Peres writes about Ben-Gurion’s “insistence on the return of the Jewish people to the sources of Jewishness…to be as we were before the Diaspora spoiled us.” What impact does this distinction have on the political goals Ben-Gurion held most dear?

2. “A Zionism of mere words is pointless,” Ben-Gurion said. He was a man of action, Peres notes, echoing him by adding: “Words are not policy.” Neither man denied the power of words, as tools of persuasion. What are the limitations of words, as compared to deeds, from a political perspective?

3. Ben-Gurion “was a man of one idea, to create a state,” Peres writes. “Everything else was secondary.” He often lived apart from his family while his children were young; his daughter recalls growing up “as though we had no father.” Was this distance necessary, or helpful to Ben-Gurion in achieving his goals? Is there a relationship between achievement in public life, and shortcomings in private life?

1. David Landau questions Ben-Gurion’s actions during the Holocaust, insisting that: “He could have raised the Heavens. Shouted.  …But instead of channeling this strength into getting the U.S. government and the Allies to rescue Jews, he focused solely on Zionist diplomacy.” Do you agree with this outlook?  Should Ben-Gurion have adjusted his position to raise more awareness of the Nazi destruction of European Jewry?

2. “What could he have done?” Peres asks, regarding Ben-Gurion’s options during the Holocaust. What do you think he might have done? Could his actions have changed the outcome for the Jews of Europe? For the Jewish state?

3. Years after the Holocaust ended, Menachem Begin threatened civil war over the issue of German reparations, when Ben-Gurion agreed to accept more than $700 million in goods and services, in compensation for Jewish property stolen by the Nazis. On a pragmatic level, Israel certainly needed the money. But on a moral level, Ben-Gurion suggested that there was a “new Germany,” and it was moral for that Germany to support the Jewish state, and moral for Israel to accept that support. Do you agree?


Partition
The partition of Palestine into two states – one Jewish, one Arab – was not something Ben-Gurion advocated. But nonetheless, when the partition plan was officially introduced, he supported it, despite opposition from other Zionist leaders.

1. Peres says Ben-Gurion saw the partition as “a tragic decision, but as an indispensable decision…And he did not shrink from deciding.” Why was it tragic? Why was it indispensable?

2. Peres cites three reasons for Ben-Gurion’s decision to accept partition: the plight of Holocaust refugees living in displaced-persons camps; his sense that the British would leave the region regardless of the acceptance or rejection of the plan; and his conviction that the Arab states would attack, leaving the Jews unable to purchase arms and raise a formal army to defend themselves unless they had a recognized state. Do you agree with his reasoning?

3. Ben-Gurion was willing to accept partition, but he faced opposition from the left and from the right, both of which opposed partition. What were their reasons for opposing the plan? How real was the danger of civil war, or armed resistance from within?


Independence
Declaring independence was not the end of Ben-Gurion’s fight, but merely the beginning. Faced with resistance from other Jewish groups, and armed invasion from neighboring Arab states, he had to find a way to maintain unity in the new state, and strive to find agreements with the Arabs.

1. In the middle of the War of Independence, a ship called the Altalena approached the shores of Israel, loaded with arms. It had been purchased by Etzel, also known as the Irgun, a right-wing fighting force under Menachem Begin’s control that had recently been folded into the Israel Defense Forces. Begin announced that the arms would go specifically to Etzel units, raising the specter of a “private army” within the new IDF. “There are not going to be two states, and there are not going to be two armies,” Ben-Gurion declared, making a decision to fire on the ship; 19 men were killed in the attack. Was the attack necessary? What might have gone differently if Ben-Gurion had simply let the ship land, and let the arms be distributed to Etzel units?

2. Peace seemed entirely possible in the years immediately following independence, Peres writes. But Jordan’s King Abdullah, who had been meeting with Israeli emissaries to conclude a peace treaty, was assassinated in 1951, and a pro-peace Lebanese statesman was also assassinated. Egypt’s monarchy was teetering, soon to fall. By 1952, the prospects for peace had completely changed for the worse. How might Israel’s position in the region have been different if even one or two of her neighbors had finalized peace agreements during that brief period? What might Israel’s boundaries have been? How might the Palestinians’ situation have been different?

3. Ben-Gurion made compromises and formed unlikely coalitions to secure independence. As the Palestinians strive for statehood today, are there lessons they might glean from Ben-Gurion’s approach?


Politics and Religion
Ben-Gurion took religion seriously, but did not set out to establish a religious government for the new state of Israel. Nonetheless, the urgency of coalition-building demanded that he create alliances with other parties whose views of religion did not necessarily match his own.

1. “Judaism was not a clerical establishment or hierarchical church” to Ben-Gurion, writes Peres. Yet despite his dislike for the rabbinate, Ben-Gurion took his faith seriously; Peres even says he “lived the Bible.” How would Ben-Gurion’s views on religion be categorized today – in Israel, or in the Diaspora?

2. Ben-Gurion formed political coalitions with religious parties, and in the early days of independence, crafted what is now the “status quo” arrangement governing issues of state and religion. One of the most controversial parts of this arrangement is the exemption from military service for full-time yeshiva students. At the time, this covered just a few hundred people; today it covers more than 55,000 would-be soldiers. Why did Ben-Gurion make this arrangement? Would it have been possible for him to do otherwise? Do you think it should stand today? Would it be possible to change it?

3. While drafting Israel’s Constitution, Ben-Gurion maintained that, in Peres’s words, “the (Orthodox) Rabbinate should not run our lives. Therefore halacha should not be the law of the land.” Taking into account the recent controversy over the authority held by the Orthodox Rabbinate in Israel where lawfully legitimate conversions, marriages, and citizenship are concerned, what can we say Ben-Gurion achieved in respect to religious harmony within the State of Israel?

4. Even though Ben-Gurion didn’t want any national religious establishment, Peres writes, he “decided not to fight this ideological battle.” The reason, Peres argues, is that in order to lead a political coalition, he had to limit the number of contentious issues that might have driven the parties apart. “If he’d fought on all fronts simultaneously and with the same passion,” Peres writes, “he’d have united all of them against him.” Do you think this is an accurate depiction of the political pressures at the time – or now? What does this say about Ben-Gurion’s pragmatism? About the Israeli political system?


Leadership
Ben-Gurion shepherded the state of Israel into existence, and many Israelis believe it could not have happened without him.

2. Peres compares Ben-Gurion to a range of other world leaders, from different eras: George Washington, Abraham Lincoln, Winston Churchill. Do these comparisons seem accurate to you? In what ways are they comparable?

3. Peres says that Ben-Gurion “never wrote a petek” – never used his influence to curry favors – not for friends, or political allies, or even his own family. Why was this so important to Ben-Gurion?

4. For decades, Ben-Gurion had philosophical differences with Chaim Weizmann, another Zionist leader who later became Israel’s first president. What was the nature of their differences? Considering the alliances Ben-Gurion managed to build politically and personally, why was this relationship so fraught with discord?

5. Ben-Gurion was controversial during his tenure, Peres says, but today there is a consensus across the political spectrum that he was a great leader. “The concept of leadership that we learned from him was not to be on top, but to be ahead,” says Peres. What does he mean by this? In what way was Ben-Gurion “ahead”?


Legacy
Ben-Gurion left office, only to return in different roles for many more years.

1. Why did subsequent Israeli administrations need Ben-Gurion? What does it mean to become the living embodiment of a country that is nonetheless an evolving, multi-party democracy?

2. Today, we are accustomed to former political leaders remaining in public life in some way – leading foundations, serving as advisers or consultants, writing memoirs, traveling the world in honorary capacities. Ben-Gurion lived his final years in a humble home in the Negev Desert. Why did this particular location and lifestyle appeal to him?

4. At Ben-Gurion’s funeral, in place of eulogies, the cantor referred to Ben-Gurion as “David Ben-Gurion, son of Avigdor, first prime minister of the State, who effected the redemption of the people of Israel in their land.” Do you think he would have agreed with that assessment? And if Ben-Gurion returned today, what would he think of the country he founded?

The Girl Who Stole My Holocaust
Noam Chayut

In Search of Fatima
Ghada Karmi

The Case for Sanctions Against Israel

The Jew is Not My Enemy
Tarek Fatah

We Built the Wall
Eileen Truax

Off the Radar
Cyrus Copeland

The End of the Peace Process
Edward W. Said

Half-Jew
Susan Jacoby
Back to Top