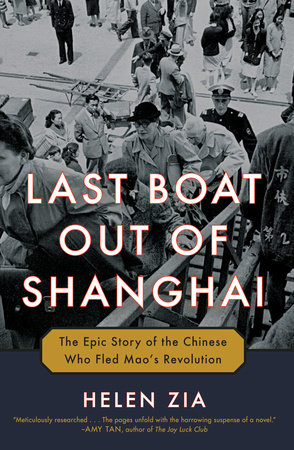 1. Helen Zia tells the story of the Shanghai exodus through the lives of four characters who left the city during the same period. Why do you think the author chose these four people out of the one hundred she interviewed?

2. Though the title of the book is Last Boat Out of Shanghai, the characters and families featured in the book left on different boats and sailed off to different destinations. Some even fled Shanghai by train or foot. Was there a literal “last boat,” or does the phrase have a more symbolic meaning?

3. Shanghai before the exodus is described as tumultuous, brutal, and corrupt. Do you feel there was one party, nation, or government that was to blame for the circumstances that led to so much upheaval and suffering? If so, which one, and why?

4. What parallels do you see between today’s global migration crisis and the mass exodus from Shanghai of seventy years ago? If you could go back in time to 1935 and change the course of events, what would you do? What can we do here and now in the U.S. to avoid repeating Shanghai’s history?

5. Did the book’s descriptions of the Chinatowns of New York and San Francisco in 1949 and the early 1950s alter how you think of today’s Chinatowns? Were you surprised to learn about the cultural differences among the different cities in China and the perceived distinctions among their inhabitants’ assertiveness and passivity, their dialects, foods, and customs?

6. The book’s four protagonists came from very different backgrounds and circumstances. Did you relate to any one of them in particular, and if so, why?

7. Last Boat Out of Shanghai features two girls, Bing and Annuo, and two boys, Benny and Ho. Did you notice differences along gender lines between the girls’ and boys’ and, later, the young men’s and women’s experiences? If so, do you think the similarities and/or differences by gender are particular to Chinese culture or do you see overlaps with other cultures during that time?

8. Bing’s story arc goes from her abandonment and servitude in young girlhood, to her essentially being sold in young adulthood, to her marriage and motherhood. What do you think happened to Bing after the story left off? Do you think the challenges of her formative years affected her adult life in the U.S.? If so, how?

9. Bing’s Elder Sister’s personality looms large throughout the story. How instrumental was she to Bing’s fate? Was Elder Sister a sympathetic character to you? Was she ruthless or merely pragmatic, given the dramatic circumstances? Do you know people in your own life with Elder Sister’s courage and initiative?

10. Three of the book’s main characters finally fled Shanghai, but one, Benny, stayed behind during the mass exodus. Given his eventual moral reckoning and spiritual transformation, how did his response to liberation compare to that of his sister, Doreen; his mother; and his father?

11. What motivated Benny’s mother to leave her family and flee with the father’s staff? Do you feel empathy with her for choosing the path she did?

12. Why did Benny’s mother fight so hard to keep Benny’s sister, Doreen, from escaping to Hong Kong? Were their clues to this aspect of Benny’s mother’s character earlier in the story?

13. Many of the book’s characters faced difficult choices. Why do you think Benny’s father stayed in his position at the infamous 76, a known hub for torture and brutality? Were his choices forced by the circumstances of war, or do you believe he was innately evil and greedy?

14. After leaving Shanghai, Ho focused first on his academic pursuits and on supporting his family, then on his intellectual and career development. Do you relate to his dual focus on family and education and does it strike you as a noble pursuit? Do you think it is particular to Chinese culture, or are family and education universal values?

15. Annuo’s father was domineering and psychologically abusive to her, but Annuo was able to escape him—not only physically, but emotionally—and went on to have a stable family life and successful career as a journalist in the U.S. How was Annuo’s life path fueled or hindered by her early profound challenges?

16. How do you think this book will be received in China today? Do you think it reflects well or poorly on the Communist Party? How might China’s reaction to the book affect current-day China-U.S. relations and tensions?

17. Why do you think Last Boat Out of Shanghai’s events, which affected millions of people, haven’t been covered in the history books? Are there other aspects of U.S. immigration and history that you think may have been forgotten or untold? Do you have an untold family history?