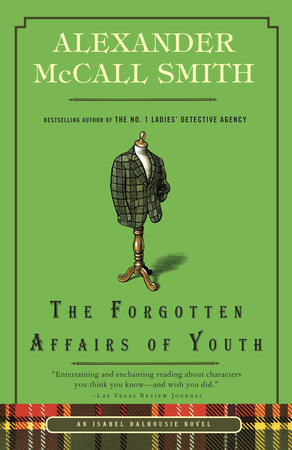 The questions, discussion topics, and suggested reading list that follow are intended to enhance your group’s conversation about The Forgotten Affairs of Youth, the latest episode in the adventures of Isabel Dalhousie.

In this installment in the adventures of moral philosopher Isabel Dalhousie, a visiting philosopher from Australia seeks Isabel’s help in locating her biological father. Jane Cooper knows that she was adopted at birth and taken to Australia and that her parents were students in Edinburgh.  Jane has learned that her mother has since died in an auto accident. Isabel, naturally, agrees to help. Even Jamie, for once, believes that Isabel should get involved.

Isabel has her own preoccupations as well.  Little Charlie, at two, is a delight to his parents and to their housekeeper, Grace, who often babysits for him.  Grace’s attendance at spiritualist meetings has produced a surprising bit of investment advice from “the other side,” and Isabel decides to act on it.  She makes a large profit, but has to deal with the disappointed Grace, who loses money when the market shifts suddenly.  And Cat, her niece, has served up some wild mushrooms in her café that send Isabel to the hospital.  When Isabel tells the truth to the health department about the source of the mushrooms, Cat becomes furious with her.  And amidst all the thoughts of family, love and loss raised by Jane’s situation, Isabel realizes finally that she and Jamie should finally get married.

As a heroine, Isabel is as thoughtful and generous as any reader could wish.  Her investigations and meditations in The Forgotten Affairs of Youth lead to a new and satisfying understanding of the meaning of family.

1. Spoiler Alert: Do not read further if you want to discover the plot twists on your own.

Cat and Isabel talk about whether they find their occupations worthwhile. Isabel admits that she wonders about it all the time, and Cat says that she does not.  “I sell cheese and Italian sausages…I don’t have time to think.  Most people don’t.  They do what they have to do because they need to eat” (24).  How does this exchange point to the differences between aunt and niece?  What does it suggest about their approaches to life?

2. Isabel and Jane have an immediate rapport: “Their conversation had started in the deep end, unlike most conversations, which launched themselves into the shallowest of shallows” (38).  What experiences and ideas does Isabel share with Jane, although they have just met?  Do you agree with Isabel’s statement about the need for a spiritual dimension in one’s life (40-41)?

3. Though he often feels that Isabel should stay out of other people’s troubles, Jamie feels strongly that she should help Jane find her father.  Is Jamie becoming more tolerant, or is there something more than usually poignant about Jane’s situation?

4. As they lie in bed, Isabel and Jamie discuss Jane’s situation, and Isabel’s mind wanders, as it often does, on various “odd tangents” (45).  He says to her, “You think these things—these curious things come into your mind—and then you just say them.  I love it.  Listening to you is like reading an amazing book” (56).  Do you enjoy the digressions of Isabel’s thoughts as much as Jamie does?  What does Jamie’s statement tell us about the kind of closeness and affection they share?

5. In her first conversation with Isabel, Catherine Succoth is guarded, though Isabel guesses at once the nature of her relationship with Alastair Rankeillor (93-101).  What is the reason for the different mood of their second conversation?  What experience do the two women share (239)?

6. As Isabel leaves the hospital after being sickened by eating wild mushrooms, she stops and speaks to a young man who has attempted suicide.  If you were in his position, how would you feel about Isabel’s words with you (118-19)?  Is it intrusive to speak to him, or is it an important act of kindness?

7. Cat’s new employee, Sinclair, is the sort of person Isabel can’t get along with.  What is at the heart of their conflict when they work together in the store (129-135)? What does their interaction, and Isabel’s annoyance with him, tell us about Isabel’s ideals of human behavior?

8. Recalling a conversation with a friend who commented that in a country village people say good morning to strangers, Isabel thinks, “But we are not moral strangers to those we see in the street” (143).  Do you agree with Isabel’s principle of “moral proximity”?  How would life be different if most people thought about moral issues as Isabel does?

9. Visiting Rory Cameron’s village, Isabel passes by some cows poking their head through a gate.  “‘I’m sorry, I have nothing for you,’ she muttered.”  Then she thinks, “It’s come to this at last: I’m talking to cows” (161).  How would you describe Isabel’s sense of humor?  In what kinds of situations do you find comedy in this novel?

10. What is striking about Rory Cameron’s reaction to the news that he is a father?  Why is it important for our understanding of the importance of this revelation that he is described as a disappointed man (170-73), a person “with an air of unhappiness about him” (159)?

11. Do you agree with the way Isabel handles the news that Grace has lost her savings by investing in West of Scotland Turbines (184)?  Is she right in compensating Grace for her loss?  What does Isabel’s remark, “Carry on being who you are,” tell us about the importance of their relationship (185)?

12. Isabel believes that Rory is not Jane’s biological father, and that Alastair Rankeillor probably is.  Catherine Succoth had suggested that Rory was the person Jane was looking for, but she confirms Isabel’s hunch when they meet again and she apologizes for having been misleading (241).  But now that Jane and Rory have struck up such a strong bond, Isabel doesn’t know how to proceed.  What is the right thing for Isabel to do in this situation?

13. In The Careful Use of Compliments, Jamie proposed to Isabel and Isabel suggested that it was better to wait. What happens, or what changes, to convince Isabel that it’s time to marry Jamie?  Why do Isabel and Jamie decide to have a very small wedding?

14. When they next meet, Jane admits that Georgina told her that Rory cannot be her father, because he’s infertile.  Georgina hasn’t told him the truth about why they haven’t had children: “she decided to protect him from the psychological burden of the knowledge of his infertility” (251).  Given that Rory is a sensitive and disappointed man, are Georgina and Jane right in protecting him from the knowledge that Jane isn’t his daughter?

15. Is Jane right in arguing that it’s the happiness gained, and not the authenticity of the relationship, that matters (251-54)?  Why does Isabel then feel uncomfortable about the outcome?

Alexander McCall Smith is the author of the beloved bestselling No. 1 Ladies’ Detective Agency series, the Isabel Dalhousie series, the Portuguese Irregular Verbs series, the 44 Scotland Street series, and the Corduroy Mansions series. He is also the author of numerous children’s books. He is professor emeritus of medical law at the University of Edinburgh and has served on many national and international organizations concerned with bioethics. He was born in what is now known as Zimbabwe and taught law at the University of Botswana. He lives in Scotland. Visit his website at www.alexandermccallsmith.com.

The Unbearable Lightness of Scones

Bertie Plays the Blues
Back to Top