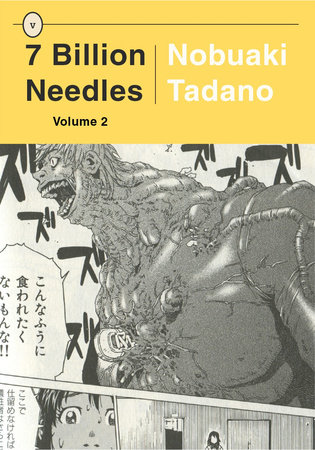 Modern day Japan is the stage for a new form of hard science-fiction, as author Nobuaki Tadano revisits one of the  genre’s Grand Masters, Hal Clement, in his debut work 7 Billion Needles.  Loosely inspired by Clement’s golden age title Needle, 7 Billion Needles follows the life of a teenage girl whose quiet boring days are dramatically changed when her body is possessed by an alien life form caught up in an intergalactic manhunt.

In this second volume of 7 Billion Needles, Hikaru is briefly lulled into a sense of normalcy.  As strange as “normal” might seem to her now, “happy days” are much more welcomed than the surreal days she experienced with Celistial. Having wasted Maelstrom in a massive battle she has been freed from the voices in her head(-phones) and is now moving on with her life with new found resolve.

So when she gets an opportunity to formally exorcise her personal demons, which come in the form of painful memories of her deceased father, Hikaru takes the first ferry to the Izu Islands to pay her final respects. When she and her friends arrive and make their way around Hikaru’s ancestral home, they all quickly realize that they were not alone making this trip. Not only is Maelstrom still around and possibly more determined than ever to defeat Celestial, but Celestial was never in Hikaru’s headphones at all… He was in her blood all this time! Making her bond to him almost as deep as her connection to her family… 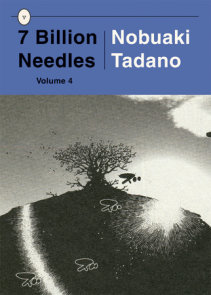 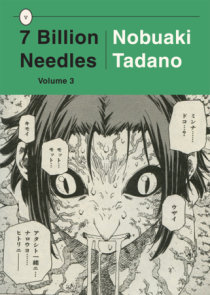 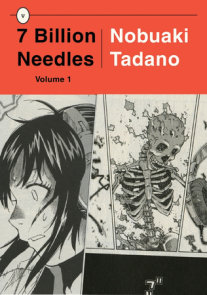 “Once I started reading it, the rest of the world faded into background, not unlike when protagonist Hikaru cranks up her music to isolate herself from her surroundings… This is a suspenseful, intense book. I love the complex and detailed art, and how clearly the action is rendered. What I enjoyed best, though, is how skillfully Nobuaki Tadano develops Hikaru’s character. By the end of this introductory volume, it’s impossible to not care for Hikaru. Oh, volume two, it will be a long wait until November! Grade: A-”
—Manga Maniac Cafe

“I am again both surprised and pleased at the level of quality Vertical Inc’s manga releases deliver. Not only is the tangible product itself appealing to the eyes and of a high quality, but the manga itself is superb on every level. The heroine herself is so realistic that the reader can easily identify, sympathize, and relate to her… Having never read the original novel, I have no idea what surprises lie ahead but the premise and world that this volume has established makes picking up the remaining three volumes a no brainer. Grade: A+” —Mania.com

“Tadano’s artwork shows remarkable versatility in the way it captures scenes ranging from everyday school life to fantastical, superpowered combat… But these shiny bells and whistles are nothing without the story, one that has a surprisingly profound side lurking beneath the action. When shy, distant Hikaru is ordered to start communicating with her peers to help seek out the enemy, it says more about who she is as a person—and who we are as humans—than about the otherworldly turmoil going on around her.”—Anime News Network

“Tadano made this science fiction story—with its monster-movie overtones, and a jolting dose of ultraviolence—mostly quiet and subdued, with a heroine who falls into none of the usual manga stereotypes. Hal Clement might have had a hard time seeing his story in this, but I think he would have appreciated those quiet moments, and the communications between Horizon and Hikaru.” —Antick Musings

“The lack of easy outs keeps 7 Billion Needles fresh…and manages to bring the sixty-year-old story into the present day and an all new setting with aplomb. Hikaru is detached, but not to the point where it puts off the reader. She just comes across as a normal girl who is a little out of her depth in life, and a lot out of her depth when it comes to alien invasions… This is good stuff, and assuming the next three books maintain this level of quality, yet another entry in Vertical, Inc.’s stock of great manga.” —ComicsAlliance

“This is a book where the cover tells you exactly what you’re in for… Reading 7 Billion Needles Vol. 1 reminded me in some ways of Parasyte, only in this case it’s less cartoonish and much creepier. And, with just a four-volume length, 7 Billion Needles already feels much more tight and focused. I came for the beautiful production design of 7 Billion Needles, but I’ll stay for the excellent story and art.” —Read About Comics

“Maybe it was some failing that I didn’t figure it out earlier, but once the title’s meaning became evident, it became pretty brilliant… Informed by Hal Clement’s original, 7 Billion Needles has its own approach to the material. Reading the manga, I found myself not so much thinking about the other manga that it resembled as I was the novel… Few readers, regardless of whether their preferences are based in manga, sci-fi or more general, will be disappointed.” —Ain’t It Cool News

“Let’s just say that it had meteoric impact, and I couldn’t stop myself from tearing through the book at lightning-fast pace… Nobuaki Tadano’s methods shine through, providing something you can’t put down. What carries the story, and provides most of the impact, is the art… It’s a great purchase for anyone who has an interest in non-tech heavy sci-fi material.” —Japanator

“[Tadano’s] graphic storytelling style is clear and strong. His crisp linework and straightforward paneling allows readers to effortlessly follow the story—that’s not always a given, especially in action-driven stories like this… A solid and entertaining sci-fi seinen manga read that’s off to a good start. It’s worth picking up and worth sticking around to see what’ll happen next.” —About.com