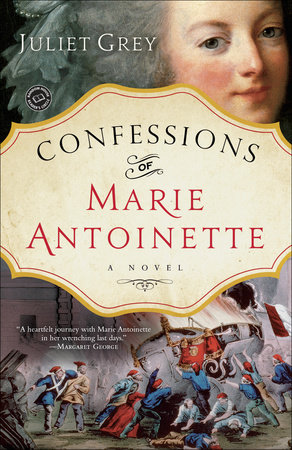 1. It’s almost axiomatic that History demands a scapegoat when something goes wrong. In Marie Antoinette’s case, the “arrogant Austrian,” the “selfish spendthrift,” made the perfect target for the revolutionary demagogues. How often throughout history has the outsider, the “other,” been blamed for the failure, for example, of a nation’s economy? Discuss examples, past and present.

3. During the ill-fated flight to the frontier on the night of June 20–21, 1791, why do you think Louis insisted that Axel leave the royal family at Bondy, even though Axel was the mastermind of the plot to escape? Tragically, there was a domino effect of mishaps and screwups with the plans from that point on. Do you think that if Louis had allowed Count von Fersen to remain on the coachman’s box, the family might have made it to safety?

4. The French nicknamed Louis XVI “Le Désiré” when he began his reign. He ended up deposed and executed. Do you think Louis was a good ruler? Why or why not?

5. If you had lived during the years 1789–1794 would you have been a revolutionary, a royalist, or more like the characterization of the young sculptress Louison Chabry, who was -neither wealthy nor impoverished, and who struggled to comprehend what the massive social and political changes were all about and tried to make sense of them?

6. What do you make of the fact that some of the most bloodthirsty revolutionaries, specifically Jacques Hébert and Maximilien Robespierre, dressed not like the sans-culottes they identified with politically, but like the aristocrats they condemned? Discuss this in conjunction with the numerous condemnations of Marie Antoinette’s ostentatious wardrobe and the accusations of her extravagant expenditures on it.

7. Biographers and historians have claimed that Madame Royale, Marie Antoinette’s daughter Marie Thérèse, whom she nicknamed Mousseline, was as a child, very cold to her mother and as an adult extremely unforgiving of Marie Antoinette’s character. Marie Thérèse’s own memoirs are indeed not very charitable toward her mother. What do you make of this and why do you think Madame Royale felt this way? Do you think her feelings are justified? Do you believe Marie Antoinette loved her daughter as much as she did her sons?

8. In August 1791, in a letter to the comte de Mercy-Argenteau, Marie Antoinette penned a remarkable sentence, which those who believe her to have been insensible of the turmoil around her might find to be surprisingly self-aware. She wrote, “Tribulation first makes one realize what one is.” What does that statement mean to you in light of her life’s journey and where it had led her by this point? How did tribulation both affect and change Marie Antoinette? If you were in her shoes, how might you have coped with the same tribulations?

Learn More About Confessions of Marie Antoinette
print
Back to Top