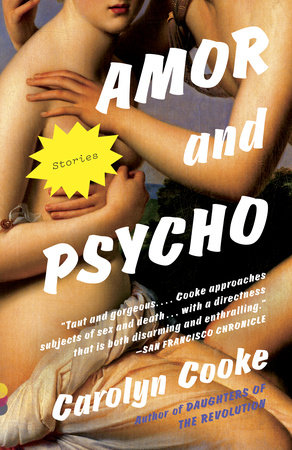 The questions, discussion topics, and reading list that follow are intended to enhance your reading group’s discussion of Amor and Psycho, a lyrical, visceral collection of short stories about sex and scars, waste and promise, from the acclaimed author of Daughters of the Revolution.

From the author of Daughters of the Revolution and The Bostons (winner of the PEN/Robert W. Bingham Prize for fiction) come eleven stories about sex and death, violence and desire, love and madness, set in a vast American landscape that ranges from the largest private residence in Manhattan to the lush rain forests and marijuana farms of Northern California.

In “Francis Bacon,” an aspiring writer learns essential lessons from an aging pornographer. In “The Snake,” a restless Jungian analyst sheds one existence after another. In “The Boundary,” a muralist falls in love with a troubled boy from the rez. In the surreal “She Bites,” a man builds an architecturally distinguished doghouse as his wife slowly transforms. And in the transcendent, three-part title story, two best friends face their strange fates, linked by determination to wrest meaning and coherence from lives spiraling out of control.

At once philosophical and compulsively readable, Amor and Psycho dives into our darkest spaces, confronting the absurdity, poetry and brutality of human existence.

1. The myth of Amor and Psyche revolves around themes of love, trust and betrayal. How does Carolyn Cooke apply those themes in her stories?

2. Several of the stories touch on the notion of looking beneath the surface—for example, in “Aesthetic Discipline”: “The Brazirs understood the discipline of surface—the depth that was protected by surface. The surface functioned as the depth.” (p. 24) What is Cooke saying about how we live?

3. Cancer affects characters in multiple stories. What do the characters’ different responses tell us about them?

4. In “Francis Bacon,” the narrator says, “I realized that choice and freedom are not necessarily optimal conditions for work, and that the most confining, restricting and repulsive situations sometimes open themselves up to be investigated, like the terrifying ‘orifices’ within the ‘figures’ of Bacon.” (p. 11) How do choice and freedom figure into this story? Into the collection as a whole?

5. “Dr. Drema’s chief interest in life lay in the study of symbols—and what animal is more symbolic than a snake?” writes Cooke in “The Snake.” (p. 30) What does the snake symbolize for Dr. Drema? In what ways does she resemble a snake herself?

6. In the title story, it’s clear how the Georgie and Babe sections intersect. How does Psycho figure in?

7. Why does Babe fill her home with stones?

8. “The Boundary” is about a woman’s relationship with an adolescent boy, but on page 96, she mentions Georgie from “Amor and Psycho.” What is the connection?

9. In that same story, the narrator says, “From Aunt Bea I learned that you could hate your life and still love life.” (p. 84) How does this prove true in other stories in the collection?

10. The narrator of “Among the Mezima-Wa” describes a series of unusual rituals matter-of-factly. Does she really accept her son’s fiancée and her family?

11. In “Isle of Wigs,” Cooke writes, “The years she had herself been a child still felt more real than the years she had been a mother. She thought of her mother brushing out her hair at night by the warm stove, and then, more dimly, of herself, brushing Fay’s hair.” (p. 118) Why did Sura run away from her mother? What does she expect from her own children?

12. In “She Bites,” Cooke veers away from the realism of the earlier stories. What is she saying here?

13. What is “The Antiheroes” about? Who are the antiheroes?

14. On page 147 Riva has an encounter with a raccoon in her house. What does this represent?

Carolyn Cooke’s Daughters of the Revolution was listed among the best novels of 2011 by the San Francisco Chronicle and The New Yorker. Her short fiction, collected in The Bostons, won the PEN/Robert W. Bingham Prize, was a finalist for the PEN/Hemingway Award and has appeared in AGNI, The Paris Review and two volumes each of The Best American Short Stories and Prize Stories: The O. Henry. She teaches in the MFA writing program at the California Institute of Integral Studies in San Francisco.

Where We Have to Go
Lauren Kirshner

The Rule of Barbarism
Abdellatif Laabi

If You Lived Here, You’d Be Home By Now
Sandra Tsing Loh

The Year of the Zinc Penny
Rick DeMarinis

Dream with No Name

The Colors of Desire
David Mura

The McSweeney’s Book of Politics and Musicals
McSweeney’s

The End As I Know It
Kevin Shay

And Sometimes Why
Rebecca Johnson

An Ambulance Is on the Way
Jonathan Wilson

Strong Winds from Nowhere
Ronit Galapo
Back to Top