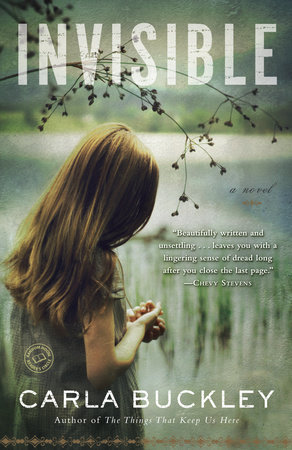 A CONVERSATION WITH CARLA BUCKLEY
S I S T E R S: An essay by Carla Buckley
When I was young, I would pester my mom. She had three sisters, I knew, but one she never talked about. I’d met my aunt Jennifer a couple of times, but then the visits abruptly stopped. When would we see her again, I asked my mother. Why couldn’t we visit her? My mother was vague in her responses.
She’s busy, she’d say. Or, we live too far apart. As a family, we had traveled all around the world for my father’s work, so I knew that
crossing a few hundred miles wasn’t really the issue. There was something else there, but whatever it was, my mother wasn’t telling
me. Deep down, I worried: if she could stop speaking to her beloved sister, could she stop speaking to me?
My mom had grown up during the Depression. She was the oldest of four sisters, and she regaled me with stories of how she
once persuaded Jennifer to yell out the window to beg passersby for a chocolate bar, and how she had to sleep under the kitchen
table that night as punishment. She told me how she and Jennifer would take turns wearing one pretty dress in a single evening so
that they could both go out on dates with soldiers on leave. She watched over her sisters when her father went to jail and her
mother worked the night shift. It was a childhood beyond my imagining.

My mother wanted me to be a good sister to my own siblings.
You’re all you’ll have left after I’m gone, she warned. But I wasn’t
sure how to do that. I was troubled by the example she and my
aunt set. Would history repeat itself in my own generation?
Would there be warning signs, or would alienation strike out of
the blue?

I never did see my aunt Jennifer again, and my mother passed
away without ever telling me what had come between them. My
other aunts wouldn’t tell me, either. Whatever it was had to be
huge, though. It had to be enormous.

Years later, when I set out to write Invisible, I thought about
that. What could come between two sisters who had once been so
close? My imagination took fl ight. In writing this story, I would
rewrite my own history. I would get to the bottom of the mystery
that had haunted me all my life. Who had wronged whom? Had it
been my aunt for committing some terrible infraction, or my
mother for refusing to forgive her? I understood, or thought I understood,
the power of family and the way silence could start out
small, then fi lter down through the generations, taking on weight
and substance and power. One way or another, I would work to
understand my mother and why she kept her secret to the grave.
It proved diffi cult for me to come up with something plausible
that could keep two sisters, who had once loved one another
very much, apart. Everything I tried made no sense. My characters,
Dana and Julie, kept pulling back together. They wanted to
rely on each other, confi de in each other. So was it really possible
to excise someone so completely from your life? My mother evi-
dently thought so, or at least, she had tried, but I wondered, Did
her estrangement from her sister gnaw at her, tinge her dreams,
and stalk her waking hours? As she watched me and my siblings
grow up, did it remind her of all she had lost?

I remember returning home during my fi rst college break.
Everything seemed more intense—the autumn leaves burned
with unusual brightness; the hardwood fl oors gleamed like gold.
My mother’s homemade vegetable soup had never tasted more
delicious. I’d only been away for a few months, but everything was
colored with poignancy. I had already taken my fi rst few steps
away from home. I was becoming an adult and I would never
again view my childhood home in the same, carefree way. Already
I was pulling away from my younger siblings. Those complicated
feelings, I thought, would be magnifi ed for Dana, who would be
coming home after many years of being away.

A homecoming to a large city—where people are always moving
in and out—might go unnoticed. But someone returning to a
small town, where everyone knows one another, and where loyalties
and confl icts run deep, would have the right resonance. I decided
to place my fi ctional small town in northern Minnesota,
where I have spent the past twenty summers. In some ways,
northern Minnesota feels like home to me; in other ways, it’s clear
that I’m an outsider. It would be that way for Dana, too.
My fi rst few attempts to reunite Dana and Julie were awkward.
They were wary and watchful, and it was hard to believe
that they had once been close. Would it have been that way between
my mother and her sister, if they had ever met again? Now
I began to think about things from my aunt’s perspective. What
had it felt like to know that she had pushed her sister away? Were
her dreams dark and fractured, too? I knew my aunt had made
overtures to my mother, attempts at reconciliation that were shot
down. At some point, my aunt gave up. Would it be like that for
Dana and Julie?

Being capable of maintaining a long silence indicated that
there was a dark side to both Julie and Dana. It would have to
color their relationships with other people. Having been away for
so long, Dana might fi nd she had nothing in common with the
people she had once known so well. She might not be able to rebuild
old friendships, or rekindle a lost romance. Too much time
might have passed and the differences between them were insurmountable.
I wondered, Could you ever go home again?

Peyton showed me the world unfi ltered, through her clear
adolescent eyes. Like me, she would be bewildered by the estrangement
between her mother and her aunt; she would wonder
why her mother couldn’t tell her the truth, and she would resent
Dana’s absence from her life. I loved the idea of a child who lived
in the middle of the country dreaming of becoming a marine biologist.
In many ways, Peyton is just like Dana. She, too, keeps the
world at arm’s length. It was in thinking about this young girl who
is overcome by loss but can’t talk about it, that I struck on the idea
of having her begin her chapters musing on the one thing—the
ocean—that she feels most passionate about, thereby revealing
herself in the only way she can.

The ocean passages are among my favorite parts of the novel.
Other than the occasional trip to the beach, I knew nothing about
the sea or the life that inhabits it. During the day, I would write,
and at night, I would read everything I could get my hands on
about sea urchins, sharks, rays, and clownfi sh. The ocean is far
more vast than I’d envisioned, inhabited by creatures I never
knew existed. I was most astounded to learn that fi sh can behave
in very human ways. The more I grew to understand these creatures,
the more I grew to understand Peyton. And I saw how the
ocean, like families, is much more than what is visible. There are
all the undercurrents, the dark secrets that lie hidden beneath the
surface. Some are washed ashore and reveal themselves. Others
never come to light.

I’m cautious in mothering my own daughters. Talk to one another,
I tell them. No one can understand you like your own sister,
I say. I speak from personal experience. There is no one who understands
me better than my own sister, no one with the same
sense of humor, with the same perspective on the world. I know
that, no matter what, my sister will always be there for me. In the
end, I’ll never know what drove my mother and her sister apart.
But my mother had been right: there is no one like your sister. I
just wish she had been able to know that for herself.

1. Do you believe it is ever justified for a company to put people at risk? When, and how much risk?

2. What lengths would you go to for your sibling? Would you make the same choices Dana and Julie made?

3. Do you think of Peyton as a typical teenager? What makes her unique?

4. A major theme of Invisible is the idea of going home again. Has Dana outgrown her hometown? What does that mean to you?

5. If Dana’s sister had not died, do you believe she would have made the same crusade against nanochemicals? If she had returned
to Black Bear for unrelated reasons, do you think she would have taken up this cause? Why or why not?

6. Is there a company or industry that you would want shut down? Why?

7. On page 280, Eric says to Peyton: “Sometimes I feel like I’ve lost you, which is dumb.” He
reached up and set his baseball cap facing forward again. “Because how can you lose something you never
really had in the fi rst place?” Do you believe this is true?

8. Is Brian Gerkey a villain? Why or why not?

9. On pages 293 to 294, Dana narrates: A tube of sunscreen poked out of my purse. I’d automatically
started to apply it that morning and caught myself just in time. A new tube, an expensive brand
fi lled with antioxidants. I couldn’t bring myself to throw it out. Was the danger in the manufacturing
process, or in the product itself? Until I knew, I’d hold on to it, just in case. It would serve as a reminder for
all the other things I’d have to be on the watch for.  What would you do if you found that you had to live your life constantly
checking products to see if they contain something you believe harmful? People already do this for other things, like cholesterol,
or sodium. How would you manage if every product you used had to be carefully reviewed?

10. If you knew you would survive, would you willingly donate a kidney if there were only a chance that the person you were donating
it to would survive? If so, what would the chance have to be before you would agree to do it?

11. How are Dana and Julie alike? How are they different? How do siblings help shape your worldview and personality?

Learn More About Invisible
print
Back to Top