The Dog Who Came in from the Cold Reader’s Guide 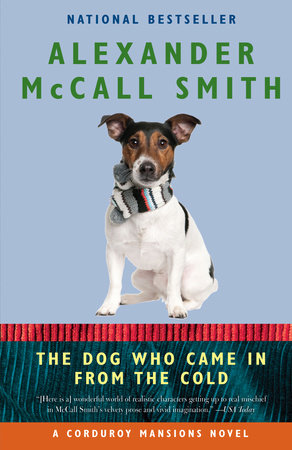 The Dog Who Came in from the Cold Reader’s Guide

In the elegantly crumbling mansion block in Pimlico called Corduroy Mansions, the comings and goings of the wonderfully motley crew of residents continue apace. A pair of New Age operators has determined that Terence Moongrove’s estate is the cosmologically correct place for their center for cosmological studies. Literary agent Barbara Ragg has decided to represent Autobiography of a Yeti, purportedly dictated to the author by the Abominable Snowman himself. And our small, furry, endlessly surprising canine hero Freddie de la Hay—belonging to failed oenophile William French—has been recruited by MI6 to infiltrate a Russian spy ring. Needless to say, the other denizens of Corduroy Mansions have issues of their own. But all of them will be addressed with the wit and insight into the foibles of the human condition that have become the hallmark of this peerless storyteller.

1. The opening pages of The Dog Who Came in from the Cold find William French reflecting on furniture. “Our furniture,” he ruminates, “says so much about us—perhaps more than we would like to acknowledge” [p.5]. Clothes are easier to change with passing fashions than furniture. Do you have furniture than reminds you of a particular stage in your life, perhaps more than you would wish?

2. On a different floor of Corduroy Mansions, Caroline is weighing her options. “I just don’t know what to do,” she confided in her mother… “There are these two men, you see, and I really don’t know which one to choose. But maybe I should choose neither” [p. 22]. What do you make of Caroline’s quandary? Have you ever been forced to chose between two people you love?

3. Caroline’s mother’s generation would never have seen choosing to remain alone as an option. What has changed in society to make this a valid alternative?

4. Not far away at the Ragg Porter Literary Agency, the tensions between Barbara and Rupert over Barbara’s flat are likened to the hostilities between Ecuador and Peru: “There had never been open hostilities . . . just enough to keep the matter alive but not sufficient to lead to actual conflict” [p. 33]. Have you ever had to work with someone in these conditions? Knowing Rupert and his wife covet Barbara’s flat, why do you think she would risk giving them a key?

5. Barbara is still trying to work on Autobiography of a Yeti. What do you think of Erroll Greatorex’s story? Do you believe that just because you don’t/can’t see something that means it doesn’t exist? If Rupert and Gloria are so convinced that the idea of a yeti is ridiculous, why do they continue to track it across London?

6. While Caroline and her newly-acquainted neighbor are having tea, Berthea theorizes that liberal social change has taken away people’s ability to belong, causing a sense of purposelessness [p. 43-44]. By creating nations where there are small communities, combining churches and streamlining dialects to form one single language, society has “destroyed the familiar . . . weakened the notion of order . . . People used to have a sense of what their lives meant because they belonged to things.”  Discuss how you feel about this idea.

7. William’s friend and former flatmate Marcia loves to cook—especially for men. “I know I should be all independent and self-sufficient and so on, but that’s just not me . . . [W]hat if I’m fulfilled by doing things for other people?” she asks a friend [p. 63]. He friend calls her “inauthentic” in return. Which side do you take in this exchange? Is it possible to be old-fashioned in a politically correct society?

8. Meanwhile, our canine hero, Freddie de la Hay, has been recruited by the MI6 (with the help of Angelica Brockelbank and Sebastian Duck). Why does William let them take Freddie? Discuss the importance of serving your country versus keeping your loved ones safe.

9. On a smaller, albeit equally important level (in the eyes of Freddie de la Hay), what do people owe to their pets? Companionship? Care? Kindness? Are we their owners? Protectors? Friends? [See pp. 134-135.]

10. Berthea Snark is quite straightforward when it comes to dealing with her feelings for her family. She continues to write the not-very-favorable biography of her son, Oedipus, while feeling sorry for her brother—“Dear Terence! What a disaster area he is!” [p. 94]. Although she appears to love Terence, she is condescending toward his “magical thinking” [p. 96]. Discuss Berthea’s relationship with Terence. Does she show him respect? What could Berthea learn from Terence?

11. Caroline’s life becomes more difficult when she finds herself jealous that Dee went to dinner with James. Throughout the book, the way Caroline thinks of herself (and the way people view her) takes on many different tones. How does it change when James describes the way he feels toward her? What about when Caroline speaks with her flatmate, Jo? And Caroline’s discussion with her own mother? How does seeing yourself through another’s eyes help you reflect upon your own life?

12. When she meets Claire and Rog, Berthea feels the need to defend her brother against these two people that would scheme against him to steal his home. While Berthea would normally consider herself a rational person, her plan to dress Lennie Marchbanks as the Green Man seems a bit over-the-top, especially when she lies to Terence to cover up her scheme. How does this change your opinion of her? Is she protecting her brother or her childhood home? How do you think Terence would react if he found out?

13. The most overarching theme in this book seems to be about home: Barbara finds a home with Hugh, Berthea helps Terence save his house, William brings Freddie de la Hay home, even Rupert gets his flat. How much does home have to do with where a person lives versus where a person comes from? What about where a person belongs?

Alexander McCall Smith is the author of the No. 1 Ladies’ Detective Agency series, the Isabel Dalhousie series, the Portuguese Irregular Verbs series, and the 44 Scotland Street series. He is professor emeritus of medical law at the University of Edinburgh and has served on many national and international organizations concerned with bioethics. He was born in what is now known as Zimbabwe and taught law at the University of Botswana. He lives in Scotland.

Visit him: www.AlexanderMcCallSmith.com
Friend him: www.facebook.com/home.php#!/alexandermccallsmith
Or follow him: twitter.com/@mccallsmith
Learn More About The Dog Who Came in from the Cold
print