I Am an Executioner Reader’s Guide 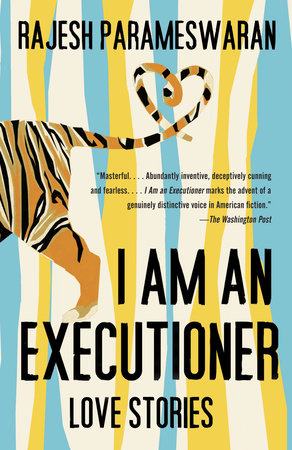 I Am an Executioner Reader’s Guide

print
I Am an Executioner Reader’s Guide

The questions, discussion topics, and reading list that follow are intended to enhance your reading group’s discussion of I Am an Executioner, the wildly inventive, darkly funny debut collection of stories by Rajesh Parameswaran.

“To claim that an author has written inventive stories about love conjures up many possibilities, but none will compare to the fertile imaginings of Rajesh Parameswaran. His debut collection, I Am an Executioner, is filled with the voices of astonishing characters—a misunderstood tiger, a strip mall con man who opens a medical clinic with only library texts to guide him, an executioner, a surveillance agent, a pompous railway manager, and more—whose pitch-perfect stories recalibrate the notion of love and power with dark humor and unbearable tenderness.” —Walter Mosley

An explosive, funny, wildly original fiction debut: nine stories about the power of love and the love of power, two urgent human desires that inevitably, and sometimes calamitously, intertwine.

In I Am an Executioner, Rajesh Parameswaran introduces us to a cast of heroes—and antiheroes—who spring from his riotous, singular imagination. From the lovesick tiger who narrates the unforgettable opener, “The Infamous Bengal Ming” (he mauls his zookeeper out of affection), to the ex-CompUSA employee who masquerades as a doctor; from a railroad manager in a turn-of-the-century Indian village, to an elephant writing her autobiography; from a woman whose Thanksgiving preparations put her husband to eternal rest, to the newlywed executioner of the title, these characters inhabit a marvelous region between desire and death, playfulness and violence. At once glittering and savage, daring and elegant, here are wholly unforgettable tales where reality loops in Borgesian twists and shines with cinematic exuberance, by an author who promises to dazzle the universe of American fiction.

1. The subtitle of this collection is “Love Stories,” yet many of the stories aren’t about traditional romance. How do you think Parameswaran defines “love story”?

2. Several of the stories are narrated by non-humans. How does Parameswaran use other creatures to illuminate aspects of our own lives? How do they address the theme of “otherness,” perhaps differently from other writers and more traditional tropes?

3. In “The Infamous Bengal Ming,” at what points did you empathize with the tiger? Why? Did you feel the same way toward other animals in the stories?

4. Toward the end of “The Strange Career of Dr. Raju Gopalarajan,” Parameswaran writes, “There are those who will never accept what must have happened next. They don’t understand what Manju saw in Gopi, for a few moments, here at the dying-ember end of our story.” (p. 43) What did Manju see in Gopi? Why does she permit what happens next?

5. Why does the author frame the story “Four Rajeshes” with the narrator speaking to a future descendant?

6. What does Parameswaran achieve by having the narrator acknowledge that this future Rajesh is actually writing the story? What do you think this shows about Parameswaran’s own take on authorial identity?

7. Why do you think “I Am an Executioner” is the title story? How does it represent the collection as a whole?

8. In that story, what does the narrator’s pidgin English signal to the reader?

9. Self-delusion plays a key role in “I Am an Executioner” and other stories. What point is Parameswaran making about this idea?

10. Why does Savitri react the way she does to her husband’s death in “Demons”? Who are the demons?

11. How does the subject of the story “Narrative of Agent 97-4702” reveal itself? What is the subtext, and how does Parameswaran explore it?

12. The last sentence of “Bibhutibhushan Mallik’s Final Storyboard” is: “But the greatest challenge always lies in how one handles the actors.” (p. 185) What does this mean, beyond moviemaking? Were you sympathetic to what happened to Mallik?

13. What is the purpose of the footnotes in “Elephants in Captivity (Part One)”? Which part is the real story—the text or the notes?

14. What does it mean for “On the Banks of Table River (Planet Lucina, Andromeda Galaxy, AD 2319)” to come at the end of the collection? Did you feel that it wrapped up themes introduced in the other stories, or moved them forward in an unresolved way?

15. What allegory is at work here? What does the story prompt us to think about race, parenting, and immigration?

16. What connections do you see among the stories in I Am an Executioner? What overall themes do they share?

Rajesh Parameswaran’s stories have appeared in McSweeney’s, Granta, Zoetrope: All-Story, Five Chapters, and Fiction. “The Strange Career of Dr. Raju Gopalarajan” was one of three stories for which McSweeney’s earned a National Magazine Award in 2007, and it was reprinted in The Best American Magazine Writing. He lives in New York City.

Super Sad True Love Story by Gary Shteyngart; What We Talk About When We Talk About Anne Frank by Nathan Englander; Other People We Married by Emma Straub; Arranged Marriage: Stories by Chitra Banerjee Divakaruni; Last Man in Tower by Aravind Adiga; The Aleph and Other Stories by Jorge Luis Borges; Pale Fire by Vladimir Nabokov; 2666 by Roberto Bolaño; Mr. Fox by Helen Oyeyemi; Squirrel Seeks Chipmunk: A Modest Bestiary by David Sedaris
Learn More About I Am an Executioner
print

The Other Language
Francesca Marciano

I Sweep the Sun Off Rooftops
Hanan al-Shaykh

Voices in the Night
Steven Millhauser

Dusk and Other Stories
James Salter

There Are Jews in My House
Lara Vapnyar

Thus Were Their Faces
Silvina Ocampo

Too Much Happiness
Alice Munro