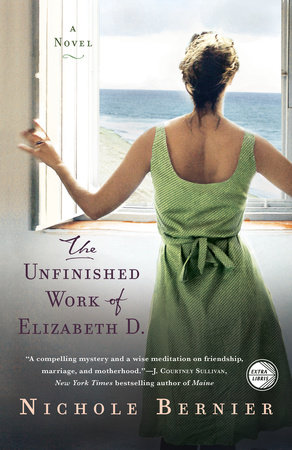 A Reader’s Guide for The Unfinished Work of Elizabeth D.: A Novel
By Nichole Bernier

The questions and discussion topics below are designed to enhance your reading group’s discussion of The Unfinished Work of Elizabeth D.

1. Many of the characters in the novel keep substantial secrets from one another for a variety of reasons. Whose do you think is the most damaging, and why?

2. In the year following September 11th, Kate’s fears reached a boiling point where any danger seemed possible, and she was paralyzed by the responsibility of keeping her family safe. Could you relate to this sentiment, and in what ways do you think that has diminished for you and in society at large, more than a decade later?

3. Kate conceals her anxiety because she is afraid it will make her seem less strong and competent. Do you think this fear is still warranted in these times of widespread knowledge about depression and anxiety, or is there still a stigma?

5. The epigraph is an excerpt of an essay by Wallace Stegner about his mother, “Letter Much Too Late,” written sixty years after she’d died, when Stegner was 80.

Somehow I should have been able to say how strong and resilient you were, what a patient and abiding and bonding force, the softness that proved in the long run stronger than what it seemed to yield to…You are at once a lasting presence and an unhealed wound.

How does this relate to The Unfinished Work of Elizabeth D., and do you think it applies to more than one character?

6. Do you think the difference between being a stay-at-home mom or a mother with a career outside the home still creates barriers between women? Do you think if women show too much passion for their work they can be perceived as less motherly? If you have belonged to a playgroup, PTA or other social organization of mothers, have you sensed tensions, stereotypes or expectations based on working status?

7. When Elizabeth is in high school, she concludes, “Smile, and the world likes you more.” Do you think that is true?

8. Elizabeth did not start out as a socially dexterous person likely to be the hub and social glue of a neighborhood mom’s group. At what point (or points) in her life did she make the conscious transition from loner to joiner? Have you ever done something like this?

9. Early in the novel, Kate wonders about what it would be like if she wandered into her husband’s home office some night to read silently while he worked–as they used to, earlier in marriage–instead of retreating to her own spot in the living room. “It was a gift, solitude. But solitude with another person, that was an art.” Do you agree? Do you think this becomes easier or harder after years as a couple?

10. Which of the two women’s storylines were you most interested in reading, and with which did you more closely identify?

11. What was your interpretation of Elizabeth’s feelings for Kate? Of Kate’s for Elizabeth?

12. If someone is shouldering a burden that would cause their family pain, do you think dealing with it silently is the most giving or the most selfish thing? Is it possible to be both at once?

13. What kinds of things do you see–or imagine–people commonly conceal when crafting their public face?

14. Do you believe the most formative developments in your life–professionally and personally–have happened by choice, coincidence, or a combination of both?

15. Do you feel your life is well balanced right now, and why or why not? Do you think those closest to you would be surprised at the way you’d answer that question?

Learn More About The Unfinished Work of Elizabeth D.
print

Outtakes from a Marriage

How Could She
Back to Top