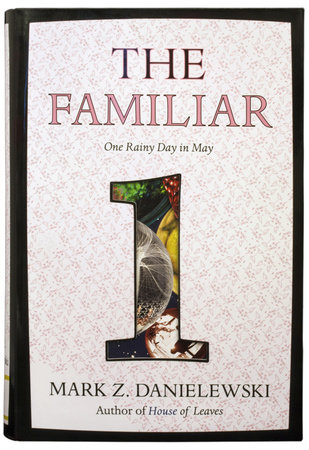 The questions, discussion topics and reading list that follow are intended to enhance your reading group’s discussion of The Familiar (Volume 1): One Rainy Day in May, Mark Z. Danielewski’s monumental new novel featuring nine diverse yet somehow interconnected characters. Feel free to wander in your discussions as you share different perspectives and explore the first volume of this vast new world.

From the author of the international best seller House of Leaves and National Book Award–nominated Only Revolutions comes a monumental new novel as dazzling as it is riveting. The Familiar (Volume 1) ranges from Mexico to Southeast Asia, from Venice, Italy, to Venice, California, with nine lives hanging in the balance, each called upon to make a terrifying choice. They include a therapist-in-training grappling with daughters as demanding as her patients; an ambitious East L.A. gang member contracted for violence; two scientists in Marfa, Texas, on the run from an organization powerful beyond imagining; plus a recovering addict in Singapore summoned at midnight by a desperate billionaire; and a programmer near Silicon Beach whose game engine might unleash consequences far exceeding the entertainment he intends. At the very heart, though, is a twelve-year-old girl named Xanther who one rainy day in May sets out with her father to get a dog, only to end up trying to save a creature as fragile as it is dangerous . . . which will change not only her life and the lives of those she has yet to encounter, but this world, too—or at least the world we think we know and the future we take for granted.

1.  Mark Z. Danielewski has described his work as “signiconic”—in which text and image merge to provide the reader with an entirely new perspective.

“Signiconic = sign + icon. Rather than engage those textual faculties of the mind remediating the pictorial or those visual faculties remediating language, the signiconic simultaneously engages both in order to lessen the significance of both, and therefore achieve a third perception no longer dependent on sign and image for remediating a world in which the mind plays no part.” —Mark Z. Danielewski

How do text and image work together throughout this volume?

2. Discuss the use of epigraphs throughout the book. What do they tell us about the individual characters? How do they help us understand The Familiar (Volume 1) as a whole?

3. How do the nine narratives of The Familiar (Volume 1) connect with one another? You might consider common themes, mentions of characters from other narratives, details about the setting, or the way one narrative transitions into the next.

4. Discuss Xanther’s irrepressible curiosity and how others react to it. Which of her questions did you find most intriguing or insightful? How do her questions change the perceptions of those around her?

5. Discuss the different belief systems in the book, particularly mythology, superstition, ritual, and magic. What is the connection between fortune-telling and the futuristic prophecy in the coming attractions?

6. Discuss the themes of custody, care, and responsibility. Who is taking care of whom? How would you relate custody in the sense of parenting to custody in a more general sense (from familiars and totems to Anwar’s game)?

7. The old Indian at the El Tajín bus stop tells Isandòrno, “But what hunts you now amigo you already own.” (p. 325) What do you think he means by this? For which of the other characters is it relevant?

8. What literary genres are associated with the different characters? How would you characterize the voice of each?

9. Jingjing’s chapters contain the most variety of language, and he yearns to travel, as is evidenced by the postcards (p. 108) next to his hammock. Yet he has chosen a life that keeps him very insulated. Why do you think he made that choice? Do you think it was driven by fear, money, duty, the desire for power, or something else?

10. The Orb emanates green light (p. 155) when Cas is in the final stages of decrypting it, Shnorhk argues in court (p. 228) that he “had green,” Anwar notices green light (p. 770) in Xanther’s room when he sees the cat in her bed, and “green” appears in various languages in the book. Is this a significant link? Why or why not? Where else in the volume does color cross temporal or geographical boundaries?

11. The Familiar (Volume 1) features many examples of digital technology—from game engines to social networks. What benefits do these technologies bring? What problems do they create?

12. What is the significance of the origami—and its accompanying katla-katla-katla—that seems to be ever-present in Özgür’s hands at crime scenes? (p. 170)

13. Who or what is a Narcon (p. 563) and what is its function? How does the description of the Narcons change your overall understanding of The Familiar (Volume 1)?

14. In the chapter “Is little irrelevant,” we learn from Mnatsagan that Shnorhk no longer speaks Armenian (p. 397) or plays Armenian music, although he feels very strongly that evidence of the Armenian Genocide should be preserved. Why do you think that is so? Do you have any guesses about the “first” thing Mnatsagan misses about Shnorhk?

15. Discuss the theme of time. What is the function of the timestamp in the corner of the pages? Why does everything take place on one rainy day in May? What gestures is the book making toward linking the deep past with the distant future?

16. Los Angeles was featured in Danielewski’s debut novel, House of Leaves, and it is prominent here as well. How does it enhance the story and almost become a central “character” in the book?

17. Why does Hopi seem to rattle Luther at such a deep level—even if Luther can’t always admit that fact to himself? And why do you think Hopi’s hands arrest Luther’s attention?

18. What do the fonts and page layouts tell you about each character—for instance, the relationship between Astair and Anwar’s chapters? Do you think the meaning of white space changes from page to page or chapter to chapter, or would you argue that there is a universal rule?

19. How does Oria’s story function in relation to the rest of the book? Did the perspective from the owl’s point of view significantly change how you would perceive the scene from a different vantage point? How is empathy displayed throughout this book?

The Best of Richard Matheson

The Informers
Back to Top