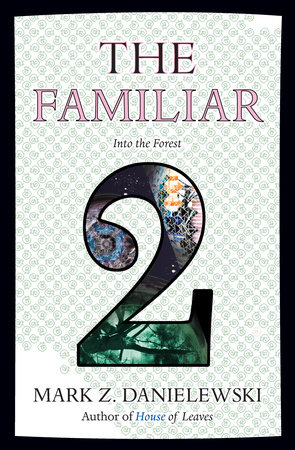 The questions, discussion topics, and reading list that follow are intended to enhance your reading group’s discussion of The Familiar, Volume 2: Into the Forest, Mark Z. Danielewski’s second volume in the Familiar series. Feel free to wander in your discussions as you share different perspectives and explore the continuing interconnected stories in this ever-expanding world.

The Familiar, Volume 2
Wherein the cat is hungry . . .

From the universally acclaimed, genre-busting author of House of Leaves comes the second volume of The Familiar, a “novel [which] goes beyond the experimental into the visionary, creating a language and style that expands the horizon of meaning . . . hint[ing] at an evolved form of literature” (Library Journal, starred review).

In The Familiar, Volume 2: Into the Forest, the lives of the disparate and dynamic nine characters introduced in “One Rainy Day in May” begin to intersect in inexplicable ways, finding harmonies and echoes in one another. What once seemed remote and disconnected draws closer—slowly, steadily—toward something inevitable . . .

At the center of it all is Xanther, a twelve-year-old girl, for whom the world around her seems to be opening, exposing doors and windows, visions and sounds, questions and ideas previously unknown. With each passing day, she begins to glimpse something she does not understand but unequivocally craves—the only thing that will bring her relief and keep her new friend alive.

1. TFv2 is described as the volume “wherein the cat is hungry.” How do hunger and consumption feature in the narrative—literally and metaphorically?

2. The first keyword for this volume is forest, and in the previous volume it was rain. What role do you see environment and the natural world playing in this series? Why is it given priority? What do you make of the fact that the forest is rendered visually with hashtags and forward slashes?

3. How has your understanding of the three relatively minor characters from TFv1—Shnorhk, Özgür, and Isandòrno—changed with this volume? Now that their stories are starting to take shape, have you reconsidered their place in the overall narrative?

4. How might Xanther’s choice of pomegranate ice cream—and the myth of Persephone—be significant to this narrative? (pp. 320‒321)

5. TFv2 opens with a quote from poet and Army veteran Brian Turner: “It should break your heart to kill.” How might we contrast the way animals kill to eat with the way we see people killing for pleasure, sport, or power? How does whether or not one’s “heart breaks to kill” factor into the novel’s larger meditation on what separates human from animal?

6. When Anwar is “overwhelmed . . . with a sense that he will lose everything,” TF-Narcon 27 mentions a coming “apocalypse” (p. 322). Do you think this will happen soon, or is it still a long way off? How might this relate to “Astral Omega” at the beginning of the volume?

8. One of the five “ratings” for this volume is “sex” (p. 33). To what extent does each character’s gender and environment alter their experience of sex and sexuality—such as Astair’s interaction with Ananias Fielding (pp. 625‒629)?

9. Despite Shnorhk’s apparent determination in TFv1 to help Mnatsagan digitally document the Armenian Genocide, he does not follow through on his promise. He also refuses to go to the clinic as promised, and remains resistant to playing the duduk with his friends (pp. 680‒681). Why might that be?

10. Discuss the themes of freedom and imprisonment. Where do we see the motif of cages? Who or what is caged? What forces make escape possible?

11. In the chapter “The Same Ghost,” Ehtisham tells Anwar something about Enzio, the company that created the Cataplyst “game” (p. 688). What does this say about the work Anwar has been doing? Do you think he is indirectly helping (or hurting) Cas and Bobby? What do you think Mefisto is up to behind the scenes?

13. What do you think Luther was trying to “prove,” given his bravado with Destiny, Dice, and Dawn (pp. 748‒755)? How did the Narcon insights alter the way you read this section?

14. What happens in the chapter “Starving” (p. 760)? How does the “signiconic” (see definition below) work in this chapter? Did pages 786‒809 change your perception of the “red” that Xanther experiences? What is the connection to the keyword hunger? Why (and how) does this chapter end in darkness?
a.       “Signiconic = sign + icon. Rather than engage those textual faculties of the mind remediating the pictorial or those visual faculties remediating language, the signiconic simultaneously engages both in order to lessen the significance of both, and therefore achieve a third perception no longer dependent on sign and image for remediating a world in which the mind plays no part.” —Mark Z. Danielewski

15. How does music function in the novel? How does it operate, variously, as code, as notation, as expression, and as communication?

16. Volume 1 introduced us to Jingjing’s “Pontianak” Monster Card (TFv1, p. 529), and Volume 2 includes “Tanngrisner” (p. 156) and “Vasuki” (p. 456). We’re told that Jingjing keeps his card deck in a sealed bag and opens it “tenderly”—revealing the “comfort of years.” Why do you think these cards hold such significance for him?

17. The poem “The Reunionist” (p. 618) has the ability to fiercely hold Astair in its grips. How did it strike you? Did it provide additional insight into what makes Astair tick?

18. Discuss the stones Xanther sees on everyone’s eyes (and her own). Why are they there? Is there a link between those stones and the creature(s) Xanther sees when she ventures “into the forest”? Why are the stones rendered visually with at-signs?

19. Discuss the hierarchy of the Narcons, considering the “anomaly” on pp. 379‒380 and the changing dynamics among the three of them with respect to Xanther (pp. 564, 769), including when a Narcon echoes Xanther’s speech patterns in saying, “Uhm, no he didn’t” (p. 339). Why do you think this change is happening?

20. Violence is again a keyword and, as in the first volume, TFv2 culminates in a brutal “act of killing.” What is the narrative function of these events? What is their effect on the reader? How do these climactic scenes connect to the violent incidents that are described or referenced but not directly represented, e.g., the murders in Isla Vista, California? How would you relate violence as it is presented in these novels with televisual, cinematic, and gamic scenes of violence?

21. Another keyword for this volume is cargo. What are the various types of cargo in this volume? What are the material and immaterial permutations of cargo, freight, and burden? Who or what is being borne?

23. Xanther’s discovery of the kill facility brings the question of animals—animal rights, animal being—into the foreground. What story about animals is starting to emerge? How do you understand Oria the Owl from TFv1 and Marvin the Markhor from TFv2?

24. Discuss the relationship between Xanther’s abilities and her new pet. Is Xanther accurate when she compares herself and the cat to a ship and a bottle (pp. 535‒536)?

25. With the second volume, we can now start to read The Familiar as a serial novel. What is the function of the repeating elements, e.g., the advertisements in the front matter, coming attractions, “new this season,” collages, comic, keywords, and stories from the perspectives of animals? How has your response to this volume been shaped by your reading of the first? How is the experience of reading a serial such as this both like and unlike the experience of reading a graphic novel issue by issue, or a popular fantasy series? What expectations do you have for The Familiar, Volume 3?

What Is an Apparatus? by Giorgio Agamben
Disgrace by J. M. Coetzee
Don’t Sleep, There Are Snakes: Life and Language in the Amazonian Jungle by Daniel L. Everett
We Are All Completely Beside Ourselves by Karen Joy Fowler
How Forests Think: Toward an Anthropology Beyond the Human by Eduardo Kohn
What If?: Serious Scientific Answers to Absurd Hypothetical Questions by Randall Munroe
Tracy’s Tiger by William Saroyan
Brand New Ancients by Kate Tempest
We by Yevgeny Zamyatin
Learn More About The Familiar, Volume 2
print

The Making of Incarnation
Tom McCarthy

The Brief and Frightening Reign of Phil
George Saunders

The Frightened Ones
Dima Wannous

5 Centimeters per Second: one more side
Makoto Shinkai
Back to Top