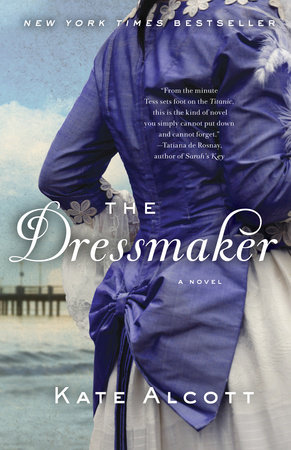 The questions, discussion topics, and suggested reading list that follow are intended to enhance your group’s conversation about The Dressmaker, Kate Alcott’s romantic and intriguing new novel.

Just in time for the centennial anniversary of the sinking of the Titanic comes a vivid, romantic, and relentlessly compelling historical novel about a spirited young woman who survives the disaster only to find herself embroiled in the media frenzy left in the wake of the tragedy.

Tess, an aspiring seamstress, thinks she’s had an incredibly lucky break when she is hired by famous designer Lady Lucile Duff Gordon to be a personal maid on the Titanic’s doomed voyage. Once on board, Tess catches the eye of two men, one a roughly-hewn but kind sailor and the other an enigmatic Chicago millionaire. But on the fourth night, disaster strikes.

Amidst the chaos and desperate urging of two very different suitors, Tess is one of the last people allowed on a lifeboat. Tess’s sailor also manages to survive unharmed, witness to Lady Duff Gordon’s questionable actions during the tragedy. Others—including the gallant Midwestern tycoon—are not so lucky.

On dry land, rumors about the survivors begin to circulate, and Lady Duff Gordon quickly becomes the subject of media scorn and later, the hearings on the Titanic. Set against a historical tragedy but told from a completely fresh angle, The Dressmaker is an atmospheric delight filled with all the period’s glitz and glamour, all the raw feelings of a national tragedy and all the contradictory emotions of young love.

1. The sinking of the Titanic in 1912 remains in many people’s eyes a symbolic dividing line between a world with rigid class divisions and one with a rising middle class. Tess yearned to be part of the glamour and Jim wanted to be free of its constraints. Can a happy medium be found between these two desires, not only for Tess and Jim, but for anyone in similar circumstances?

2. Tess and Pinky were two young women in a rapidly changing world, on the cusp of a time when women could actually make choices about their lives and work.  Describe how the choices for women one hundred years ago differ from today, and how they remain the same.

3. Tess and Pinky are both smart, competent women who experience moments of both conflict and companionship with one another. What ultimately draws them together and bonds their friendship?

4. In many ways Tess is unflappable and emotionally direct, but at times, she can be anxious and uncertain, especially around Lucille.  Dealing with design—fabric, texture, and color seem to be the best route to confidence. What does this say about Tess’ personality?

5. What is your overall impression of Lucile?  Is she a villain or simply misunderstood? If her arrogance and sense of privilege are what got her into trouble, what redeeming factors—if any—do you see in her?

6. How would you argue Lucille’s case? Compare her treatment to that of celebrities of our own time who get caught in controversy.

7. Fashion is its own character in the book—both glamorous and fickle. Is the fashion industry viewed differently now than it was in 1912? Who is Lucille’s design equivalent today? Or was Lucille incomparable?

8. If Lucille’s career had not declined after the sinking, do you think she could have evolved as a designer and conformed to society’s new opinions of the female figure and fashion? Or were both Lucille and her designs destined to become obsolete?

9. Only one of twenty lifeboats went back for survivors. Many people felt anguish and regret; others believed they had no choice.  Can you picture yourself in that same situation? Husbands, children in the water—what comes first, the instinct to survive or to save others? How would you hope you would act?

10. Officer Harold Lowe was criticized for declaring he waited until the pleas for help from the water “thinned out” before going back on a rescue mission.  This kind of blunt honesty shocked those who heard it. Are we still adverse to hearing hard facts from those whom we want to be heroes?

11. Using the “whitewash brush,” as a ship officer put it, the White Star Line did its best to deny all responsibility for the Titanic tragedy. Its officers even falsely claimed at first that the ship had not sunk, raising the hopes of the families waiting on land. What parallels do you see with White Star’s corporate reaction and current corporate self-protectiveness?

12. Did you find out anything new about the Titanic from reading the book? Were you aware of the hearings that occurred after the sinking?

KATE ALCOTT was a reporter covering politics in Washington D.C., where she and her husband still live.
Learn More About The Dressmaker
print

The Secret Life of Violet Grant

My Name Is Mary Sutter

The Girl You Left Behind

We Must Be Brave
Back to Top