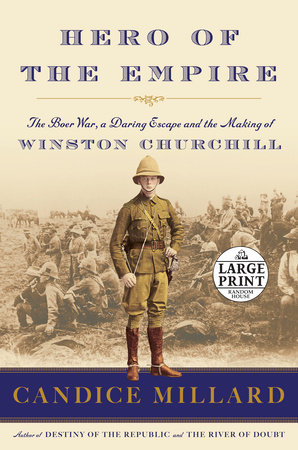 1. What were your first impressions of Winston Churchill as a young man?  Did you admire his confidence and his “unshakable convictionthat he was destined for greatness”?

2. Were you surprised to learn that Churchill enlisted the services of a “palmist” to predict what the future held for him?

3. In Chapter 7, we learn the provenance of the iconic Burberry trench coat.  The average life expectancy of a horse during the Boer Warwas six weeks.  What other facts of this nature did you find most interesting or surprising?

4. “Nothing but being shot at will ever teach men the art of using cover,” writes George Warrington Steevens from Ladysmith (p. 121). Discuss how the Boer War transformed British military strategy.

5. Class plays an important role in Churchill’s exploits during his early life.  How does his status as a member of a wealthy, prominentfamily work for–and against–him?

6. What were your impressions of Jennie Churchill?  Did you think she was a modern woman ahead of her time or an opportunist?

7. Did you find the circumstances of Churchill’s escape from the Staats Model School foolhardy or was Churchill simply taking advantageof what may have been his only chance to escape?

8. Kidnapped, Treasure Island, Plato’s Republic, Aristotle’s Politics, Decline and Fall of the Roman Empire:  Are there any books onChurchill’s reading list that you would like to try?

9. Several famous names make cameo appearances in the book, from Rudyard Kipling to Mahatma Gandhi. Were you surprised by this intersection of history? Have you read other books, either nonfiction or fiction, in which the lives of historical figures overlap in unlikely ways or places?

10. What additional thoughts did you have about apartheid and the fight for human rights and social justice, later led by men like Nelson Mandela, after reading about the history between the Boers and native Africans, both before and during the Boer War?

11. After Churchill returned to England there was a controversy surrounding his escape, and he was accused of intentionally leaving his friends behind. Do you think he had a choice? Was he wrong to go on without them, or did he find himself in an untenable situation?

Learn More About Hero of the Empire
print

The Women with Silver Wings
Back to Top