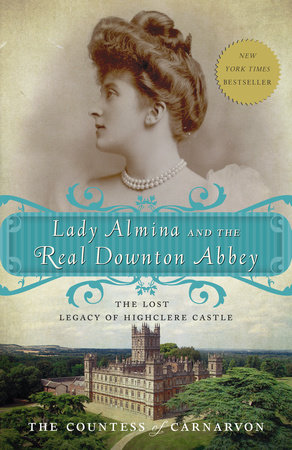 The real-life inspiration for the hit PBS show Downton Abbey, Highclere Castle has been in the family of the Earl of Carnarvon since the seventeenth century. Later transformed into a stately Georgian mansion with intricate Gothic turrets, the castle was a center of political life during the reign of Queen Victoria. When nineteen-year-old Almina Wombwell became the 5th Countess of Carnarvon in 1895, her marriage marked perhaps the most enticing chapter in the castle’s rich history—an era marked by lavish gatherings attended by England’s most powerful families as they savored the zenith of their way of life.

Transporting readers to a vanished time and place, Lady Almina and the Real Downton Abbey tells the story of a spirited young woman who captured the hearts of English society despite her dubious status as the illegitimate daughter of phenomenally wealthy industrialist Alfred de Rothschild. Offering a solace from the ravages of the Great War, Lady Almina opened the doors of Highclere Castle to wounded military officers; their stories would be preserved in the castle’s rich archive of letters, photographs, and diaries. After the war, Lord Carnarvon’s enthusiasm for Egypt led to headline-making expeditions with Howard Carter, culminating in the discovery of the tomb of Tutankhamun; many of these antiquities became part of Highclere’s collection.

By turns a mesmerizing biography and a unique portrait of history, Lady Almina and the Real Downton Abbey will captivate your reading group. The questions that follow are designed to enrich your journey through Lady Almina’s world.

1. Lady Almina’s wealth contributed to her social success, but far more was required to achieve prestige in her husband’s circles. What special traits and wisdom did she possess?

2. How does Downton Abbey’s Lady Cora Crawley compare to Almina? Is Cora at a disadvantage because she is American, or did outsiders perhaps have the upper hand in Edwardian England?

3. When Lady Almina opened Highclere Castle to wounded military officers, she wanted to deliver more than first-rate medical treatment; she understood that a beautiful environment would enhance the healing process as well. What can twenty-first-century medicine learn from her?

4. The author describes heated Edwardian debates over taxing the wealthy, reforms to the House of Lords, immigration, and the National Insurance Bill—issues that remain controversial today. Lady Almina was a vocal conservative. If you had been a member of the landed gentry, would you have sided with the Liberals or the Tories? How did Aubrey balance his election as a conservative with his liberal beliefs?

5. What inspired Lord Carnarvon and Aubrey to immerse themselves in worlds far removed from the English countryside? What was at the root of Lord Carnarvon’s enthusiasm for Egyptian antiquities? What surprising details did the book provide about foreign affairs in the early twentieth century?

6. Were you enticed or dismayed by the role of aristocratic women from Almina’s generation? How did they gain power? How was their power limited by their husbands and by social custom? If you were the widow Almina, would you have remarried as she did?

7. As the author provided vivid descriptions of the wardrobes, interior decorations, and feasts that marked Highclere Castle, which aspects captured your imagination the most? Was Almina’s lavish spending a good investment?

8. How did you react to the parenting protocols of the late Victorian and Edwardian eras? Was it reasonable for children of the aristocracy, whose lives were woven with royalty, to be held to a higher standard of behavior? How were the expectations for raising Porchy different from those for raising Eve?

9. Discuss the solid marriage that Almina and Lord Carnarvon enjoyed. How were they able to make a good match despite the strict courtship methods they had to follow? What accounts for the way they balanced freedom and mutual support throughout their marriage?

10. Is nobility a burden or a blessing? How would you have fared at Highclere as a servant, or as an administrative aide such as Mary Weekes?

12. The author notes that it was the economic fallout of the Second World War, combined with new tax structures, that made it impossible to maintain the opulence of previous generations at Highclere Castle. Why is it important to preserve the building and its history, if not the lifestyle, in contemporary times?

13. Discuss your own family legacies that are tied to this time period. How did status and class affect your ancestors? Did any of them serve in the Great War? Which of your family legacies—financial or otherwise—were formed a century ago?

Catherine the Great: Portrait of a Woman
Robert K. Massie

The Wars of the Roses
Alison Weir

The Tenth Gift
Jane Johnson
Back to Top