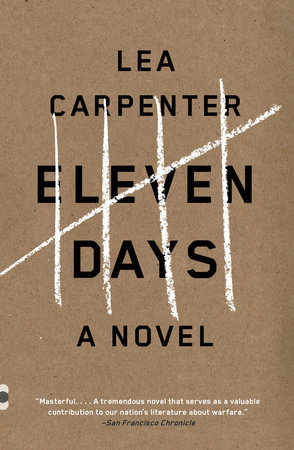 The introduction, discussion questions, and suggested further reading that follow are designed to enhance your group’s discussion of Eleven Days, Lea Carpenter’s astonishing debut novel about a single mother and her Navy SEAL son.

As the novel begins, Sara’s son, Jason—on his fifth tour of duty—has been missing in action for nine days, after the most secretive and important special operations mission of his career. Sara’s suffering is compounded by the fact that Jason’s father, David, had died when Jason was only eight and had left them long before that, engaged in some mysterious work overseas.

Though Sara lives alone in a simple farmhouse in Chadds Ford, Pennsylvania, she has become a local celebrity, with the press corps camped out in her driveway, waiting for word about the son of a man, well known in diplomatic and military circles, who had himself reportedly died to “make this country safer” [p. 8]. Sam, one of Jason’s friends from the “Teams,” has come to live with Sara and see her through this most difficult of times.

The novel proceeds in chapters alternating between past and present, told from either Sara’s or Jason’s point of view, and creating a narrative tension that draws the reader in. Some chapters are devoted to Jason’s incredibly intense training as a Navy SEAL, but it is the ethos and culture of the Teams that Jason finds most compelling—the loyalty, teamwork, attention to detail, restraint, and willingness to sacrifice oneself for one’s fellow team members. The goal is to become not merely a solider but a warrior, in the most exalted and valorous sense of that term. In a letter to his mother, Jason writes about the Inner Warrior who knows when to act and when to refrain, a skill that has become increasingly important in the new warfare, often played out at close quarters, in clearing rooms rather than large-scale engagements on battlefields.

As the days pass, Sara remembers the gentleness and intelligence of her son, who she had hoped would be different from his father and grow up unfamiliar with “words like Kalashnikov, katusha, or jezail” [p. 4]. But after 9/11, Jason chooses military service over Harvard and his access to what might have become a political or diplomatic career in Washington, D.C.

As the novel races to its suspenseful conclusion, more of David’s secret life is revealed, and the true nature and importance of Jason’s mission emerges. Jason must face an extraordinary challenge, one that calls for both courage and compassion, an ultimate test of his strength as a perfect warrior.

Eleven Days is a remarkably original novel about war in that it focuses more deeply on the idealistic culture and ethos of the warrior, and the demanding training a warrior must undergo, rather than the violence of war itself. It offers a fresh view of the American military, a view that may surprise readers of all political persuasions. But it above all is a novel about the love between a mother and son, and the true source of the courage that inspires a man to a heroic act.

1. The themes of young men going off to war, and the overwhelming anxiety this causes their mothers, extends as far back as ancient Greece. In what ways does Eleven Days both participate in and add to this literary tradition? What is new and unique about the novel? What are some of the novel’s most emotionally wrenching moments?

2. When Jason asks his mother about the difference between “myths” and “fictions,” she tells him: “A myth is a fiction that matters” [p. 241].She also quotes her favorite writer, Joan Didion: “We tell ourselves stories in order to live” [p. 241]. What role do myths, fictions, and stories play in the novel? How are the mythic stories of Thetis and Achilles, and Jason and the Argonauts, especially relevant to Sara and Jason?

3. What is the effect of the novel’s cutting back and forth between Sara’s and Jason’s perspectives and between different time periods? Would the novel have been less effective or suspenseful if told in a straight chronological order and from a single point of view?

4. What motivates Jason, beyond the attacks of 9/11, to join the military? Why does he keep going back for five tours?

6. In a letter to his mother, Jason talks about his training and what he’s learning about the Inner Warrior. He writes: “The Inner Warrior is kind of like the Editor inside us. It is the voice you hear that tells you not just what to do but what not to do, too. … You have to be able to do everything, and then you have to have the ability to refrain from doing anything. That last skill is often the most powerful of all” [p. 76]. Why is this kind of restraint so important in the context of the new forms warfare has now taken? What other aspects of his training, and the specific military ethos of the Teams, affect Jason most strongly?

7. Eleven Days offers a rare inside look at the unique training and culture of Navy SEALs. What aspects of this training—and the ethos that it promotes—were most surprising?

8. What is the symbolic significance of Jason’s decision to go back for the baby he hears crying in the Kill House—of risking his life to save a child? Why does it seem both unexpected and inevitable that he would make that choice? What are the consequences, for all concerned, of his actions?

9. Near the end of the novel, Sara thinks that David “had drifted, at last, to that higher plane he’d long desired to live on, where nothing could hold him to gravity’s laws. He would float above feelings. He always had. But what was her task now?” [p. 252]. Has David’s spiritual life been a form of escape, a kind of spiritual bypassing, a way to avoid difficult feelings? How is Sara different from David in how she handles her emotional life? What is the task that she must now accomplish?

10. Sara waits several months before reading the letter [p. 253] Jason left for her, until she feels emotionally ready. Many writers would have taken full advantage of Sara’s response to the letter, which was no doubt profound, but Carpenter chooses to leave that to the reader’s imagination. Why might the author have made this decision? In what ways does Jason’s letter land with greater power because readers don’t get to see Sara’s response?

11. At the end of the novel, when Sara visits Arlington National Cemetery, she thinks, This is the first place people should come if they want to understand us [p. 259]. Why does she feel this way? How might Arlington illuminate something essential about the American character?

12. The final mission Jason leads occurs on May 2, 2011, the same date that Osama bin Laden was killed by U.S. Navy SEALs. In what important ways does the novel diverge from the actual events of that night? What is it that can make fiction that grows out of real, historical events so compelling?

13. Most novels about war have been written by men. In what ways does Eleven Days offer a uniquely feminine perspective on war?

14. What makes the ending of the novel so moving? Is there a hint of hopefulness for Sara in the book’s closing paragraphs?

The Last King of Scotland
Giles Foden
Back to Top