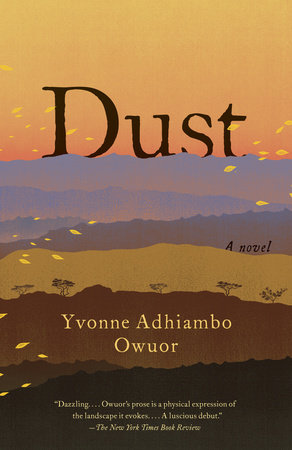 The introduction, author biography, discussion questions, and suggested reading that follow are designed to enhance your group’s discussion of Dust, the riveting new novel by Yvonne Adhiambo Owuor.

Moses Ebewesit Odidi Oganda has been gunned down on the streets of Nairobi by the police, and his sister, Ajany, and father, Nyipir, have brought him home to Wuoth Ogik—a place named Journey’s End—for burial. They are struggling to cope with their grief when an Englishman named Isaiah William Bolton makes a mysterious appearance and claims to be looking for Odidi. Isaiah and the Oganda family must come to terms not just with their loss but also with the piercing questions it resurrects. Only by breaking the silence that has bound them and naming their secrets can they finally find peace.

Set in a turbulent Kenya of the 1950s and 1960s, which was plagued by uprisings, assassinations, and genocide, Dust is a book that reaches back into history with a hand that does not let go. Owuor courageously plumbs the depths of the human heart. With stunning detail and lyricism, she paints a devastating portrait of a struggling country, its people, and its ghosts, while illuminating truths about the most universal of human experiences: love and loss.

As Owuor explores the explosive intersection of personal and cultural histories and the secrets that one family can possess, she gives power to the written word: exploring the nature of truth, the endurance of myth, and the transformative power of art and storytelling. A staggering tour de force spilling over with revelations, Dust catalogs the breadth of human suffering and shines a light on the long journey toward healing and redemption. Readers will not be able to set down this book full of mysteries as they wait to find out where the characters will end up—and discover where they have been.

1. Why do you think that the author has chosen the name Dust for this novel? Where do we find dust mentioned or depicted in the novel? What symbolic purpose might this name have? Likewise, how do other natural elements described in the book—weather and landscape—help to reveal or inform us about the inner selves of each of the characters?

2. Who killed Odidi Oganda and why did they kill him? How does each member of Odidi’s family respond to his death? What burial traditions and customs does the Kenyan family observe and what views of death do they share? What does the novel seem to reveal about death and the process of grieving?

3. Why has Isaiah Bolton come to Kenya to meet with Odidi? Is his trip successful? Does he ultimately find what he was looking for? How does his presence in Wuoth Ogik affect the members of the Oganda family? What is Isaiah’s relationship with Ajany like, and how does it evolve over the course of the novel? What do the two have in common?

4. The Trader is a “gatherer and carrier of stories.” (84) Why do people share their stories with the Trader? What do they gain from this? What does the Trader gain?

6. Speaking of the deceased Odidi Oganda, Justina says: “That sister calls him Odidi; me, I say Odi-Ebe; you say Moses. Many people. One person.” (247) What does Justina’s observation reveal about identity and the nature of relationships? In fact, many of the characters in the story have multiple names. Which characters choose to employ false names and why do they use these aliases?

8. Evaluate the author’s use of repetition as literary device. How does repetition create a sense of the poetic or lyrical and why is this stylistic choice significant? Where do we find examples of poetry or song in the novel? What are some of the subjects they depict, and what significance do they have for those who listen to them or perform them?

9. Dust is a book filled with haunting silences and secrets. Discuss some of the major secrets kept by the characters. What does it mean to say “to name something is to bring it to life”? (251) Likewise, why do the characters take oaths of silence or refuse to speak certain names aloud? Why does the narrator say that silence is one of the languages of Kenya? Find some examples in the text to support this. Who reveals their secrets by the book’s end and what is the outcome of the revelation?

10. Explore the themes of leaving home and homecoming in the novel. When Ajany reflects on her decision to leave home, she wonders: “Was it possible that two separate feelings of place could exist between [her and Odidi]?” (119) Why does Ajany leave home while Odidi remains? What does the author mean when she writes “Places are ghosts, too”? (121) What other examples of homecoming or leaving home are found in the novel? What are the characters’ reasons?

11. Discuss the impact of political and economic circumstances on the characters’ process of decision making. What are some of the decisions that the characters are faced with and how do they handle them? Are the characters able to stand up for what they believe in and do what they think is right, or must they compromise in order to survive?

12. Which characters in the novel are artists and what are some of the subjects of their art? Do we discover what these characters hope to gain from practicing their art? Why did Ajany’s parents burn her artwork when she was a young girl?

14. Consider the treatment of superstition, myth, and religion in the novel. How are the characters’ views of life and the world around them shaped by these ideas? What are some of the myths and superstitions referenced in the book? How is Christianity depicted? What do the characters find faith in?

15. What role does truth play in the novel? Are the stories recounted by the characters or told to each other always true? Are the characters reliable storytellers?  If not, what causes them to lie or to otherwise refrain from telling or admitting the truth?

17. Discuss Owuor’s use of native language in the book. Why might she have chosen to leave some passages in a native language rather than to have the entire novel printed in a single language?

Yvonne Adhiambo Owuor was born in Nairobi, Kenya. She received degrees from Jomo Kenyatta University and the University of Reading. In 2003 she was awarded the Caine Prize for African Writing and in 2004 she was named Woman of the Year by Kenya’s Eve woman’s magazine for her contributions to literature and the arts.  In 2010, she participated in the Chinua Achebe Center for African Writers and Artists’ Pilgrimages project and delivered a talk entitled “Memories of Landscape” at TEDxNairobi.
Learn More About Dust
print