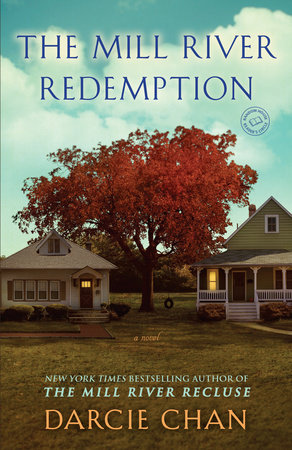 1. In the beginning of The Mill River Redemption, Josie DiSanti is traumatized and frightened. Over the course of the story, however, she becomes strong, self-sufficient, and confident. What do you feel is the single biggest factor in her transformation?

2. As a single parent, Josie tries to be everything to and provide everything for her daughters Rose and Emily. Given her situation, what do you feel were her greatest successes and failures as a parent? What might she have done differently?

3. Josie has to deal with an unpleasant boss in her first job as a single parent. Have you encountered a “Ned Circle”—i.e., someone who intentionally tried to make things difficult for you—in your own life or career? If so, how did you handle the situation?

5. In your experience, is trying to forgive someone easier or more difficult if you love the person seeking the forgiveness?

6. Daisy Delaine repeatedly seeks to apologize to Rose for her perceived transgression at Josie’s wake. Do you think Rose’s response to Daisy is an expression of personal animosity or a result of the influence of alcohol?

7. How does Rose evolve from the moment she arrives in Mill River for the summer to the end of the story? Did your feelings toward her change over the course of the book?

8. Emily returns to Mill River to honor her mother’s wishes and also to confront her own past. Despite all that has happened, do you think she still loves her sister? Does she change as a person as events unfold? At the end of the story, do you believe she will really be able to forgive Rose for what she did?

9. Claudia Simon struggles with feelings of insecurity, even though Kyle gives her no reason to doubt his feelings until she sees him coming out of Emily’s house. If you had been in Claudia’s position, what would you have done at that point?

10. Ivy’s little bookstore is a labor of love and her life’s work. How does it reflect her personality?

11. Josie is desperate to see her girls’ estrangement end. Does she go too far in her efforts to force their reconciliation? Do you think that what she does is worth it in the end? What would you have done had you been in her position?

12. As a “recovering spoon addict,” Father O’Brien manages to keep his compulsion under control in this novel. Do you think that he will continue to refrain from stealing spoons, or do you think he will eventually relapse? Does his grief over Mary McAllister’s death have anything to do with his newfound self-control?

13. Sheldon sees Rose at an experimental theater performance and is taken with her immediately. Do you believe in love at first sight? If so, is it the kind of love that can withstand the challenges inherent in most marriages?

14. Near the end of the book, Josie refers to Father O’Brien as “a priceless antique that’s still functional.” Is there, or has there been, an elderly person in your life who fits that description? Who is or was it, and what made the person so special to you?

I have loved reading all of my life. I found it very difficult to choose only six books as my favorites, as there are so many more that I could have included here! But, each of the following books is simply wonderful, and I hope that you enjoy reading them as much as I did.

This gorgeous novel is variously funny, gut-wrenching, frustrating, and uplifting. Like all the books on this list, I thought it was beautifully written. The characters are utterly real and compelling, particularly eight-year-old Brandon, from whose perspective the story is written. The plot focuses on his grandparents’ struggle to protect him from their daughter, who runs off with her latest boyfriend and abandons him at a bus station. I’m the mother of a little boy, and Brandon’s plight touched me deeply. My heart ached for him and cheered with him at the end. Also, I was impressed by the author’s skill at pulling the reader into the story. The emotional resonance of the story is great, and I could almost feel the humidity of the South settling against my skin.

The Snow Child by Eowyn Ivey

There are very few books that completely blow me away, but this first novel did. Apparently, it had the same effect on many other people, as it was a finalist for the Pulitzer Prize! In this story about a childless couple in 1920s Alaska, the author’s choice of language is exquisite, and I was surprised at how skillfully the author wreaked havoc with my sensibilities. First, I was convinced that a wild little girl seen by the couple was a figment of their imaginations. But then, I started to believe the girl was real before being slung once again in the opposite direction. The answer is revealed in a moving, surprising ending. This story is unforgettable.

Modoc: The True Story of the Greatest Elephant That Ever Lived by Ralph Helfer

I tend to read mostly fiction, but this is a nonfiction book that I absolutely loved. It is a captivating story of the lifelong bond between a boy and a female Asian elephant. The story takes the reader from Europe, through the exotic teak forests of India, and then to the circus in the United States. It’s an amazing testament to the intelligence of elephants and of their ability to form lasting friendships with people.

This story has so many wonderful aspects: a clever, creative plot, a cast of mostly lovable, oddball characters, and great humor, all wrapped up with a touch of whimsy. I had such a strong desire to pack up and move into the old Owens house—I could see it so clearly in my mind’s eye—and to get to know its inhabitants. And, having two younger sisters myself, I could truly appreciate the bond between Sally and Gillian. This is their coming-of-age story, one that ends with each sister finally finding happiness. I’ve reread this book several times, which is unusual for me, and I’ve come to think of it as an old friend.

A Gift of Magic by Lois Duncan

I first read this story as a preteen and it captivated me, so much so that I reread it as an adult and enjoyed it just as much! After all, who hasn’t wondered what it would be like to be able to read other people’s minds? This is a story about three children, each of whom is blessed with a special gift. I love the relationships between the siblings in this book, too, and I was constantly guessing about what would happen next. This is a suspenseful story with a heartwarming ending.

A Tree Grows in Brooklyn by Betty Smith

This is my all-time favorite book. It was first published in 1943, and it provides a fascinating, in-depth look at a slice of American society in the early twentieth century. It is written with unflinching honesty, and many of the situations described are difficult to read emotionally, but the rewards of the story are just as great. Francie, the protagonist, is an incredible role model. This is her survival story, one with lessons that are still relevant today. What Francie achieves in the face of poverty and adversity is inspiring and exceptional.
Learn More About The Mill River Redemption
print

The Deepest Secret
Carla Buckley
Back to Top