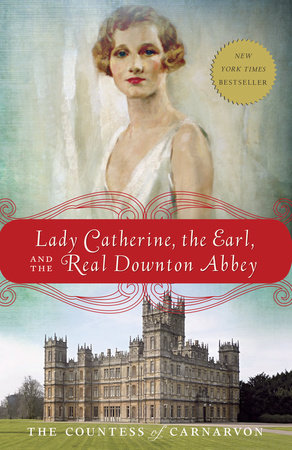 A captivating follow-up to the bestselling Lady Almina and the Real Downton Abbey, this is the story of Catherine Wendell, the American beauty who married the 6th Earl of Carnarvon and presided over Highclere Castle during the Jazz Age. Catherine first met Lady Almina’s son, Lord Porchester (Porchey), in Gibraltar, where she immediately caught the eye of the dashing twenty-four-year-old aide-de-camp. He was one of British society’s most eligible bachelors, and she was one of its favorite young ladies; she had already turned down several proposals.

The 5th Earl of Carnarvon died in Egypt not long after Porchey and Catherine’s 1922 wedding. Lady Catherine, the Earl, and the Real Downton Abbey captures the tumultuous transition as Porchey discovered how precarious his father’s financial situation had been. Just as the Crawley family must cope with financial jeopardy on the hit PBS show inspired by Highclere Castle, the 6th Earl was unsure if he could afford to keep the beloved family estate. The book captures his wrenching decision to auction off the castle’s most valuable assets, including the family pearls. Yet he was able to keep Highclere itself and maintain a modern version of his ancestors’ lifestyle.

With candor and sensitivity, the current countess of Carnarvon also captures the subsequent unraveling of Catherine and Porchey’s marriage. Drawing on the castle’s splendid archive—including diaries and scrapbooks—she then traces the tragedies and triumphs experienced by the family and staff as World War II erupted. Highclere Castle and the estate were turned into homes for evacuee children as well as lodging for soldiers, and the divorced Catherine and Porchey found common ground as their son, Henry, set off for the frontline. His sister, Penelope, along with their parents, volunteered for service on the home front.

A stirring portrait of history, Lady Catherine, the Earl, and the Real Downton Abbey will captivate your reading group. We hope the questions that follow will enrich your journey to this extraordinary time and place.

1. How does Lady Catherine’s world compare to the societies depicted in Lady Almina and the Real Downton Abbey? Who had the greater freedom—wealthy Almina or modern Catherine? What can both women teach us about resilience?

2. Downton Abbey’s characters cope with romantic rivalries and economic crises, just as Porchey and Catherine did. In what other ways does the PBS show echo the book? In what ways was life at Highclere Castle even more dramatic than at Downton Abbey?

3. How did Lady Catherine, the Earl, and the Real Downton Abbey enhance your understanding of the British experience during World War II? What historical details surprised you the most?

4. The author artfully weaves Henry’s frontline experience with Robert Taylor’s. How did World War II transform Britain’s social divisions? Who in your family was part of the Greatest Generation?

5. Catherine’s widowed mother decided to move her family to London, but Porchey’s new bride, Tilly, ensconced herself in the States. How did transatlantic connections shape the culture of the early twentieth century? How were the American and British identities perceived on both sides of the Atlantic?

6. In chapter fourteen, we learn about George, the valet and acting butler who was dismissed after shirking his duties and trying to have a taste of his lord’s lavish lifestyle. Compare him to Robert Taylor, whose lifelong career outside the military was to be a devoted servant at Highclere. If you had lived during that time period, which role would you have been more likely to take?

7. What did Porchey and Catherine ultimately seek in their other spouses? Why was Catherine able to find a match with a stable man who cherished her, while Porchey pursued women who could not commit to him?

8. Just as Lady Almina transformed Highclere Castle into a hospital for wounded officers during World War I, Porchey and Tilly saw the estate transformed into a shelter for children and, later, for soldiers’ quarters. Does this spirit of hands-on generosity exist among today’s upper classes?

9. Like Downton Abbey’s Robert Crawley, Catherine’s father lost his fortune by staking the family’s future in a single stock. On the other hand, Porchey’s investment in Pyrotenax helped secure his future. What do these decisions tell us about the balance of luck and wisdom in building—and keeping—wealth?

10. The book begins with depictions of an opulent life for Catherine and her children. It shifts to a life of service as each member of the family begins supporting the war effort. Despite the trauma of war, how was the family enhanced by the immersion in working-class duties?

11. The author reminds us that Catherine’s divorce stipulation secured Highclere Castle for her son, and for future earls of Carnarvon. In doing so, what did she preserve besides architecture and a place of shelter? What are the intangible benefits of maintaining the castle and its owner’s noble title?

12. What do you predict for the future of Britain’s aristocracy and the new generation of royals? Will their network be as powerful as Porchey’s friendships with future kings and queens?

Learn More About Lady Catherine, the Earl, and the Real Downton Abbey
print

The Crazyladies of Pearl Street
Trevanian

The Buddha in the Attic
Julie Otsuka
Back to Top