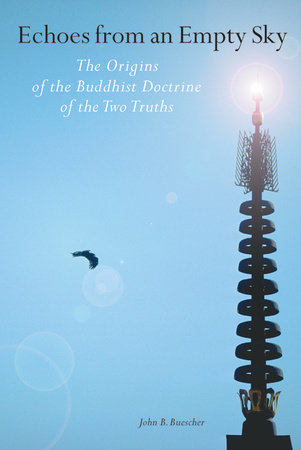 Echoes from an Empty Sky

The Origin of the Buddhist Doctrine of the Two Truths

By John B. Buescher

By John B. Buescher

About Echoes from an Empty Sky

The important Buddhist doctrine of the two truths—conventional truths and ultimate truths—is the subject of this book. It examines how the doctrine evolved within early Buddhism from efforts to make sense of contradictions within the collected sayings of the Buddha. The two truths, however, came to refer not primarily to statements or language, but to the realities to which statements or language referred. As such, the doctrine of the two truths became one through which Buddhist philosophers focused their efforts to elaborate an abhidharma, a higher teaching which allowed them to explain how the mind apprehends and misapprehends the world, how it attaches itself to objects that do not exist in and of themselves, thereby creating suffering. In effect, the doctrine then evolved into a distinction between different sorts of objects rather than a distinction between different sorts of statements.

The doctrine of the truths understood in this way played a key role in the articulation of the Mahayana by its followers in distinguishing it from what they called Hinayana, especially in defining the central ideas of selflessness and emptiness. Unlike prior books on this topic which concentrate on the doctrine within the context of the Mahayana, Buescher’s examines it within the context of the Hinayana. Tibetan Buddhist syntheses of Buddhist doctrine provide a fascinating perspective from which to compare the positions of the major Indian schools. Such works, however, often lack the historical perspective from which to discern the development of these positions.

“In Echoes from an Empty Sky, John Buescher offers a clear and accessible translation of an early nineteenth-century Tibetan overview of one of the most famous doctrines in Buddhist philosophy: the two truths. In a substantial introduction, he traces the history of the relation between language and truth in ancient India, focusing especially on the question of the conventional and ultimate nature of the Buddha’s words.”—Donald S. Lopez Jr., Carl W. Belser Professor of Buddhist and Tibetan Studies, University of Michigan

“A terrific book crucial for understanding and penetrating the false veils of appearance.”—Jeffrey Hopkins, Professor, University of Virginia

Echoes from an Empty Sky