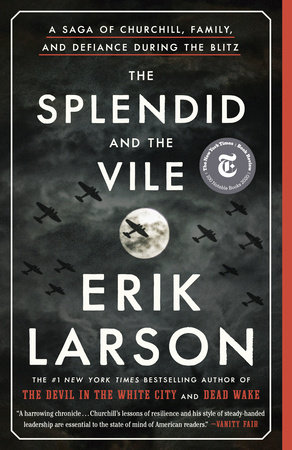 print
The Splendid and the Vile Reader’s Guide

In order to provide reading groups with the most informed and thought-provoking questions possible, it is necessary to reveal certain aspects of the story line of this book. If you have not finished reading The Splendid and the Vile, we respectfully suggest that you do so before reviewing this guide.

1. The book’s title comes from a line in John Colville’s diary about the peculiar beauty of watching bombs fall over his home city: “Never was there such a contrast of natural splendor and human vileness.” How do you think a tragedy like this could be considered beautiful? Why do you think Larson chose this title?

2. The Splendid and the Vile covers Winston Churchill’s first year in office. What are the benefits of focusing on this truncated time period?

3. Larson draws on many sources to provide a vivid picture of Churchill’s home and family life in his first year as prime minister. What struck you most about his family dynamic? Considering how powerful he was at the time, was his relationship with his family what you would have expected it to be? Why or why not?

4. Churchill’s most trusted advisers spent many long days and nights with the prime minister, so much so that they became like members of his family. Why do you think Churchill had such close relationships with his political advisers? What do you see as being the key advantages and disadvantages of running a government office in this way? Which of Churchill’s political relationships was the most interesting to you?

5. Larson provides various perspectives in the book, from diaries by Mary Churchill and Mass-Observation participants to the inner workings of both Churchill’s and Hitler’s cabinets. How did these different perspectives enhance your understanding of life in 1940 and 1941?

6. Reading about how war was waged and discussed by the public in 1940, do you see any similarities to how we talk about warfare today?

7. How did you feel reading about the raids? How would your daily life and your priorities change if your country were experiencing similar attacks with such frequency?

8. The book includes anecdotes about a vast array of characters around Churchill, such as his daughter-in-law Pamela, his children Randolph and Mary, and his wife, Clementine. What are the benefits of including various stories about the people related to Churchill—like Pamela’s affair, or Randolph’s gambling habits—in a book discussing his first year in office? Which of these characters did you find to be the most interesting? The most surprising?

9. Mary Churchill recounts the evening when the Café de Paris—where she and her friends had planned to go dancing—was bombed. After the initial shock, her group decides that the dead would have wanted them to continue their evening of gaiety and dancing elsewhere, and they move on to another location. What did you think about this choice? What do you think you would have done in their situation?

10. Discuss Mary Churchill’s portrayal in the book. Do you feel she grows and matures throughout this tumultuous year? Why or why not?

11. What was the most surprising thing you learned about Churchill? Why did it surprise you?

12. While England rationed food, gasoline, and other supplies during the war, Churchill and his cabinet received extra provisions. What did you think about this policy? Do you think government officials are justified in implementing such measures during a time of crisis? Why or why not?

13. Were there any decisions Churchill made over the course of his first year as prime minister that you disagreed with? If so, which? Which of his decisions were you most impressed with?

14. Do you think there has been another leader as universally beloved in their day as Churchill was in his? If so, who? If not, why not?

Learn More About The Splendid and the Vile
print