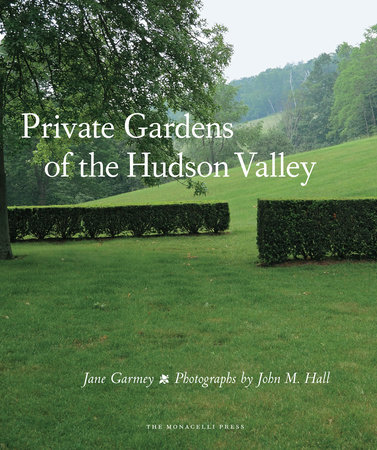 Private Gardens of the Hudson Valley

About Private Gardens of the Hudson Valley

Private Gardens of the Hudson Valley surveys the majestic landscape that borders the Hudson River, an area rich in history and unique garden designs. The scenery, which encompasses riverfront meadows, craggy hills, and long open valleys, is inherently dramatic.

Twenty-six private gardens are presented here, chosen to establish a sense of place and to convey the romance of the landscape. John Hall’s photographs give a privileged view of the life within, while Jane Garmey’s warm and engaging narrative traces the development of the gardens and the great pleasure their owners take in nurturing them. As Garmey notes in her introduction, each of these gardens has been made by the owner, and special attention given to the transition between the cultivated garden and the grandeur of the larger landscape beyond.

The splendid setting of the Hudson Valley encompasses an almost infinite variety of design approaches from formal and traditional to naturalistic and an equal range of scale from multiple gardens within a vast estate to charmingly diminutive spaces between historic village houses. All have much to tell us about the complexity, challenges, and finally the unforgettable pleasure of making a garden. 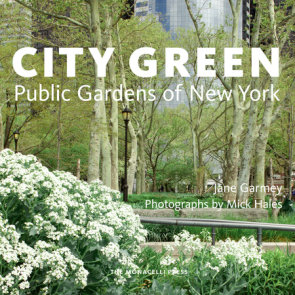 See all books by Jane Garmey

“Contain your envy and trespass a bit further in Private Gardens of the Hudson Valley, Jane Garmey and John M. Hall’s follow-up to Private Gardens of Connecticut. The owners of these properties have serious horticultural credentials (one is president of the New York Botanical Garden, another is growing 250 kinds of peppers for her latest gardening book and hand-pollinates every one of her squashes), yet they can also be endearingly plain-spoken. ‘My aesthetic is on the messy side,’ confesses the owner of a Stanfordville garden whose ‘mess’ I’d gladly replicate. And how to resist this confession from the owner of an ‘in-town’ garden in Hudson who wasn’t around when his 22 tons of gravel were delivered, by mistake, to the house next door: ‘That was painful.’ There’s also some refreshing whimsy, thanks to the inventive woman from Salt Point who bought a gazebo kit, had it mounted on a platform with a motor and now floats it on her vast garden pond, ‘a marvelous venue for cocktails and sunset boat rides.’” —The New York Times Book Review

“Writer Jane Garmey and photographer John M. Hall document the ways homeowners have shaped this lush area of rolling hills and dramatic vistas. Some gardens are naturalistic; others, like a Japanese-style circle of raked stone and boulders, seem almost surreal.” —Elle Décor

“Thumbing through this book, one almost forgets that the subject is Hudson Valley. The majority of the photographs are taken in the full-bloom of spring or as summer produce is on the vine, creating a perfect Eden free of the upstate winter months. Hall’s work walks through each garden so intimately that one can almost feel the warmth of the sunlight or the grass underfoot. Garmey’s prose introduces us to 26 landscapes, but she limits herself to only a few paragraphs. The stunning images hardly need qualification.” —Interior Design

“Twenty-six distinguished gardens found in the landscape that borders the Hudson River in New York. The extraordinary backdrop includes meadows along the river, hills and extensive valleys surrounding the properties. Each of the gardens introduced in this volume are created by the owners themselves and given careful attention to the transition between the refined garden and the majesty of the panorama beyond.” —Milieu magazine

“In Quaker Hill, a naturalistic garden was designed by Robin Zitter to go with the 18th century house. In Amenia, architect Gil Schafer hired noted landscape designer Deborah Nevins to help him create a series of enclosed gardens around the house. Some of these gardens were designed by their dedicated owners, others by professional landscape designers. Most of the gardens are quite traditional, with the exception of the very modern garden of Steve Trevor and Ronnie Planalp in Clinton Corners. Plentiful and beautiful photos by John M. Hall will give any reader plenty of ideas for design and plant combinations.” —Garden Design Online

“A beautiful new coffee table book. The twenty-six gardens are the creations of passionate, if not obsessive, gardeners. There are great estates like Edgewater, which is owned by the renowned American furniture collector Richard Jenrette, who purchased the property that juts into the Hudson River from the writer Gore Vidal in 1969. While most of the gardens were photographed in spring and summer, there are gorgeous autumn shots of Frederic Rich’s riverfront property in Philipstown, where he boldly sited a Zen garden in the woods.” —Rural Intelligence

“Reveals the hidden allées, flowering fields and sprawling vegetable plots of upstate New York’s most stunning outdoor spaces. When leafing through Private Gardens of the Hidden Valley, one is exposed not only to a wealth of verdant spreads but also to the tremendous amount of steady, patient human effort that goes into creating them. Garmey paints vivid portraits of the garden owners by describing their decision-making and sharing personal anecdotes. One of the best things about the book is its portrait of the 21st-century splendor of a region that has historically loomed so large in the American imagination—as the rugged, respondent paradise of the Hudson River School painters, and as the 19th-century rural hub of such high-society clans as the Vanderbilts and Rockefellers. Few places mix that kind of civility and rawness, and Garmey captures it well.” —1st Dibs Introspective

“A splendid book. . . . Garmey finds her subjects mostly through luck and word of mouth. She prefers gardens that belong to people who have been closely involved in the planning of their creations.  She has also tried to present a full spectrum of landscape art, from the small, meticulous town garden of Richard Egan in Hudson to the sweeping landscape created by Susie and Bruce Kovner here in Millbrook.” —The Millbrook Independent

“Even for non-gardeners this is a delight of a book. Author, Jane Garmey, writes about 26 private gardens that appear to almost merge seamlessly into the surrounding countryside—its meadows, hills and valleys. Not to be outdone, garden photographer John M. Hall has captured and echoed Jane’s delightful prose with his clever and sometimes dreamy and ethereal pictures. . . . Beautifully produced and an absolute joy to peruse.” —The Foody Traveller

Private Gardens of the Hudson Valley