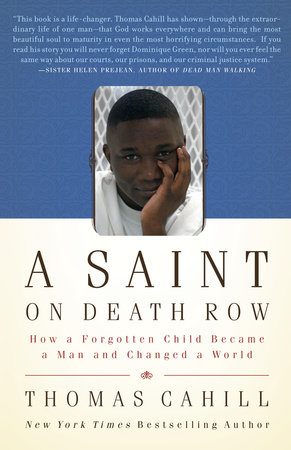 In writing A Saint on Death Row: The Story of Dominique Green, Thomas Cahill produced more than a testament to grace; he also produced a call to action. In this exposé of injustice, Cahill describes the road that led Dominique Green to be sentenced to die by lethal injection, and to subsequently become one of the greatest peacemakers on Texas’s Death Row.

Subject to abuse and poverty throughout his childhood, Dominique fell into a life of petty crime and was arrested at the age of 18 after a Houston man was shot during a robbery outside a convenience store. Dominique may have taken part in the robbery but always insisted that he did not pull the trigger. Months later, after an inadequate defense, Dominique was convicted and sentenced to death. Though three other young men were arrested in connection with the crime, including a white youth who admitted to sharing in the proceeds of the robbery but was granted immunity, Green was the only one to receive a death sentence. Like countless others on death row, he was barred from receiving a fair trial because of racism and financial hardship. But the twelve years Dominique spent on death row distinguished him in surprising ways: he
emerged as a proponent of forgiveness and reconciliation, peace and enlightenment. The murder victim’s widow and children became Dominique’s strong advocates, loudly denouncing his pending execution.

An international roster of luminaries, including Dominique’s hero, Archbishop Desmond Tutu, mounted a high-profile campaign on his behalf. Though they were unsuccessful in the courts, this book represents a call to ensure that Dominique did not die in vain. For readers who want to become part of his vision for a world in which truth and compassion prevail, this guide offers an inspiring path.

Green, an extraordinary young man from the urban ghettos of Houston, was utterly failed by every echelon of society–the Catholic Church, numerous U.S. courts of law, and even his own mother.  But from the depths of despair on Death Row, he transcended his earthly sufferings and achieved enlightenment and peace, inciting an international movement against the death penalty and inspiring his personal hero, Archbishop Desmond Tutu, to plead publicly for mercy.

A Saint on Death Row is an unforgettable, sobering, and deeply spiritual account that illuminates the moral imperatives too often ignored in the headlong quest for judgment.

1. Dominique Green bore the emotional and physical scars of his mother’s abuse and was estranged at times from his father, yet Dominique displayed extraordinary parenting skills, giving powerful guidance to his brothers and his fellow inmates. How would you answer the question Thomas Cahill poses in chapter one: “How did Dominique … evolve into the expansive human being he became if all his early experiences were negative?” How might what Dominique learned be implemented with other at-risk youth?

2. For Dominique and thousands of other youths, the juvenile justice system became a mandatory home. Does it appear as though there is any kind of support structure for the children in this system, and is enough done to prepare children in the system for life on the outside? How would you characterize the family Dominique created for himself inside prison?

3. Near the end of his life, Dominique hoped that Shelia could teach Stephanie how to be a mother. Was his hope realistic? Would having a mentor, someone to teach parenting, help in abusive situations such as the ones Dominique and Stephanie found themselves in?

4. In his poem “What does hate create,” reprinted in chapter one, Dominique describes how it feels when “nobody does anything/nobody utters a peep” while he is raped. Though sexual abuse of minors in Texas’s juvenile corrections facilities has received significant media attention, his poem raises the broader question of child neglect. How can this sort of abuse be prevented? Is there any way to readjust societal norms so that institutional abuse of children is never tolerated? What would it take to fund foster programs and sufficient numbers of child advocates in your community?

5. Cahill describes blooming flowers as a reflection of Dominique’s journey to adulthood. What legacy has Dominique left for his younger brothers? What did he teach them about becoming a good man?

6. In chapter six, Cahill expresses frustration at those who miss the point of Dominique’s experience. The question, Cahill says, was not whether Dominique was guilty but whether he got a fair trial. What are the best responses to those who believe that the poor receive sufficient legal representation?

7. Chapter two includes a quote from the Los Angeles Times in which Judge Shaver, who presided over Dominique’s trial, says, “The Constitution says everyone’s entitled to the lawyer of their choice, and Mr. Benn was their choice. The Constitution doesn’t say the lawyer has to be awake.” Chapter four reveals that Sheila Murphy could not serve as Dominique’s principal attorney because his existing counsel could only be removed by court order. What would it take to mandate high standards for public defenders in your community?

8. If you had served on Dominique’s jury, how would you have reacted to the case presented by the prosecutor?

9. Discuss Texas’s “law of parties,” described in chapter two, which allows accomplices to be convicted of capital murder even if they did not actually commit the murder. Do you believe that the law is constitutional? If a Texas legislator proposed to repeal that law, could he or she stand a chance of getting reelected?

10. Dominique loved listening to news programs, but Cahill describes incidents in which the media distorted or omitted key facts about his case (see chapter five). In what ways is the struggle for justice a struggle for publicity? What is the best way to serve as a media watchdog?

11. Dominique said that he never expected his rosary, whose beads represented friends, mentors, or spiritual guides who had been executed, to grow so long. He chose to stop adding beads at 101. A rosary is typically used for counting prayers; what does Dominique’s rosary say about his approach to prayer?

12. How was Dominique able to keep his faith from being extinguished despite a lifetime of hardship (including sexual abuse by a priest at his Catholic elementary school)?

13. Dominique was transformed by Desmond Tutu’s No Future Without Forgiveness, in which the former archbishop of Cape Town describes chairing South Africa’s Truth and Reconciliation Commission. How did Dominique exemplify the commission’s principles? How do these principles compare with the image of a God who orders sinners to suffer?

14. Discuss the book’s title. Who were the saints and the sinners along Dominique’s road to execution?

15. Did A Saint on Death Row change your beliefs about the nature of suffering in the world, and the nature of joy and love, good and evil? If so, how?

16. How did you react to the anthology produced by Dominique and his fellow inmates? What insights did you gain from their voices?

17. Cahill begins the first chapter by observing that Dominique was born less than four months after the birth of Cahill’s first child. In a similar exercise, compare your childhood to Dominique’s, in terms of family life, education, culture, comfort, and other factors. If you had been born into Dominique’s family, where would you be today?

18. The widow of Andrew Lastrapes, along with their sons, vocally opposed Dominique’s execution. Groups such as Murder Victims’ Families for Reconciliation (www.mvfr.org) oppose the death penalty in all cases. How was a bridge built between Dominique and the Lastrapes family? What distinguishes families like the Lastrapeses and those survivors who approve of capital punishment?

19. Dominique’s team of supporters came to include Stefania Caterina and others from around the globe. How do cases like Dominique’s—and the existence of capital punishment in general—affect America’s standing in the world?

20. Discuss Jessica’s role in Dominique’s life. What factors led her to such an accomplished adulthood? What could she and Dominique have accomplished together if he had been raised in different circumstances?

Thomas Cahill is the author of five volumes in the Hinges of History series: How the Irish Saved Civilization, The Gifts of the Jews, Desire of the Everlasting Hills, Sailing the Wine-Dark Sea, and Mysteries of the Middle Ages. They have been best-sellers, not only in the United States but also in countries ranging from Italy to Brazil. He and his wife, Susan, also a writer, divide their time between New York City and Rome.

Debating the Death Penalty edited by Hugh Adam Bedau and Paul G. Cassell
Slavery by Another Name by Douglas A. Blackmon
No Equal Justice by David Cole
The Innocent Man by John Grisham
The Rope, the Chair, and the Needle: Capital Punishment in Texas, 1923-1990 by James Marquart, Sheldon Ekland-Olson, and Jonathan Sorensen
The Trouble with Black Boys … and Other Reflections on Race, Equity, and the Future of Public Education by Pedro Noguera
Dead Man Walking and The Death of Innocents by Sister Helen Prejean
Actual Innocence by Berry Scheck, Peter Neufeld, and Jim Dwyer
A Hope in the Unseen: From the Inner City to the Ivy League by Ron Suskind
Whatever It Takes: Geoffrey Canada’s Quest to Change Harlem and America by Paul Tough
An African Prayer Book by Desmond Tutu
God Has a Dream by Desmond Tutu
No Future Without Forgiveness by Desmond Tutu
The Rainbow People of God by Desmond Tutu
Learn More About A Saint on Death Row
print

Wrapped in the Flag
Claire Conner

When Character Was King
Peggy Noonan

The Majesty of the Law
Sandra Day O’Connor

Blinded by the Right
David Brock

In My Place
Charlayne Hunter-Gault

Out of the Shadows
Timea Nagy and Shannon Moroney

Can You Hear Me Now?
Celina Caesar-Chavannes

Convicted in the Womb
Carl Upchurch

Not Quite Not White
Sharmila Sen

Immune
Philipp Dettmer
Back to Top