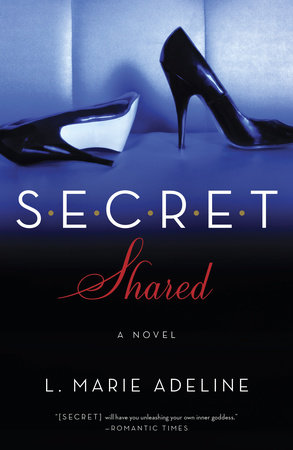 One year ago, Cassie Robichaud joined S.E.C.R.E.T.—the sexual sisterhood dedicated to fulfilling erotic fantasies for one lucky woman at a time. Now that she has completed her ten steps, Cassie puts her newfound expertise to work as guide to Dauphine Mason, S.E.C.R.E.T.’s latest recruit. The two women come from different worlds, but both know the feeling of being shackled by old wounds: Northern-born Cassie, heartbroken from a failed marriage, endured a years-long sexual dry spell before she earned her S.E.C.R.E.T. charms; Southern girl Dauphine, still reeling from a painful betrayal eight years ago, dresses her customers beautifully and watches her favorite bands from the crowd, but lacks the confidence to join the party herself. Like Cassie a year before, Dauphine craves the courage to come out of her shell—and the women of S.E.C.R.E.T. are ready to show her the way. Sex and sensuality are at the heart of S.E.C.R.E.T.’s work, but as the fantasies are fulfilled, the women also see their whole lives changed. Dauphine is finally able to make strides she never thought possible as she begins to leave the past behind. But as Cassie is learning, the kick-start that S.E.C.R.E.T. provides is only the beginning: each woman now faces choices that only she can make as she learns to live fully in her body, mind and heart.

1. Cassie Robichaud and Dauphine Mason were both hurt by the men from their past. Both women isolate as a result. By partaking in S.E.C.R.E.T., how does Dauphine successfully leave those memories behind? How did Cassie? How does Dauphine’s journey differ from Cassie’s? How are they similar?

2. When Dauphine Mason is on the shore of the Abita River for her first fantasy, she is nervous, self-conscious and frozen, but she tells herself: ” Stop thinking. Act,” and takes the plunge as she accepts her first Step. What are some other examples throughout the book where Dauphine stops thinking and acts? What results does she get? Have you ever had to “shake yourself free” this way?

3. If you were a member of S.E.C.R.E.T., would you want to be a guide, recruiter or fantasy facilitator? Cassie experiments with all three roles—which do you think suits her best?

4. “You did it. You gave up control.” For Dauphine, her journey in S.E.C.R.E.T. is a path leading her from a life ruled by control to one where she is finally able to let go. With each Step, she lets go of the familiar, routine and isolated life to which she finds herself increasingly clinging. What kinds of things do you control that you could benefit from letting go of? What steps have you taken to give up that control? What would freedom from those habits look like?

5. What did you think of Matilda’s recruiting methods? How was she able to spot a willing and able recruit in Dominic? Where would you go to spot a recruit? And what is the answer to Cassie’s question: how did Matilda “get the hottest guy in the park” to come to her?

6. As Cassie reflects on her relationship with Will, she marvels at the notion that she had known him for so many years, yet never allowed herself to see him as a potential lover until she was transformed by S.E.C.R.E.T. What other unseen gifts does she uncover? What are the gifts in your life that you might not be noticing?

7. After Luke leaves Dauphine and writes his bestselling book, humiliating her, how does Dauphine continue to give him power? When Dauphine meets Mark, how is that relationship different from her relationship with Luke?

8. Cassie’s experience with S.E.C.R.E.T. was successful in transforming her from someone withdrawn and timid to a confident, self-realized woman of action. But with Will, she feels stuck, unable to be with him. Matilda advises Cassie to get on with the business of life—not to let heartbreak get in the way of practical concerns. “Don’t give men that much power, Cassie. Get on with the task of living.” Do you agree with this advice?

9. “I always went with the most powerful force governing my life at the time,” says Dauphine. What are the powerful forces governing Dauphine’s life when we first meet her? How do they affect her life? By the end of the book, how have those forces shifted?

10. The first time Dauphine sees Cassie at Ignatius’s, Cassie gets Mark Drury’s phone number with an ease and confidence that impresses both of them. Have you ever seen a similar example in your life, when someone pulled something off that you couldn’t dream of doing? When Cassie then visits Dauphine at the Funky Monkey, how does she establish trust?

11. Before Dauphine decides to tell Cassie that she is interested in pursuing S.E.C.R.E.T., she asks her why she thinks fulfilling wild sex fantasies will fix everything. Cassie explains that it won’t fix everything but that it will create a “cascade effect” in her life. Do you agree that this is how change can occur? Is there any one thing you would like to change that might create a similar effect in your own life?

12. When Dauphine meets the S.E.C.R.E.T. committee at the Mansion, she makes a list of rules for herself from which she won’t budge: no flying, no lights on, nothing to do with beaches and no water. She breaks every one of her rules. What rules would you have if you were to take the S.E.C.R.E.T. Steps? Which ones might you consider breaking under the right circumstances?

13. What surprised you about Dauphine handing her completely empty fantasy folder over to the Committee, telling them, “surprise me”?

14. Cassie has Mark’s phone number yet she hesitates to call him. What holds her back? Do you think there remains a general perception that women shouldn’t call men? Why? Or why not?

15. Both Cassie and Dauphine hesitate before joining S.E.C.R.E.T. But Mark’s reaction to being recruited into S.E.C.R.E.T. is different. According to Cassie it “required no preamble . . . no psychic obstacles, [or] social conditioning to fight against; [it] didn’t cause him to question everything he was taught about his role in society or his sexuality.” Do you think when it comes to men, women and sex, that there is still a double standard?

16. During Mark’s training with Angela, Matilda explains that making a woman feel desirable is the greatest aphrodisiac. Is that true for you? Angela instructs Mark to smolder, not smile, to take his time but not to be too deliberate and to maintain eye contact. Would you find this sexy? Are there are behaviors you would like a partner to exhibit to make you feel desirable? What do you make of Mark’s training session? What would you have done differently? What did you agree with?

17. In Buenos Aires, Dauphine trusts her instincts when she meets Pierre Castille and refuses to take the Step with him. What was it about him or that situation that made her feel unsafe? Do you have a reflex that allows you to protect yourself when you feel unsafe?

18. The theme of sexual rebirth is prevalent throughout the book. In addition to her fantasies, particularly the first one where she is submerged in a river, what are some other firsts in the book for Dauphine? What about Cassie?

19. Matilda says to Cassie: “The word ‘slut,’ unless employed by iron-clad feminists or ironically, by irony experts, has no business coming out of a woman’s mouth.” Talk about that word and its ramifications. Why do you think Matilda is so passionate about the word “slut”? Do you agree with her?

20. Beside hair color, age and general shape, L. Marie Adeline does not describe Cassie or Dauphine’s physical appearances in very much detail, leaving much of what they look like up to the readers’ imaginations. She also refrains from referring to them as beautiful or sexy though the men they’re with often flatter them. Why do you think this is the case? How do you picture Cassie and Dauphine?

21. Dauphine and Cassie encounter many different men in the course of their S.E.C.R.E.T. journeys, including a police officer, a pilot, an athlete and a musician. Which one of these male archetypes would appeal to you the most, and why? Who is the sexiest character in the book? Why do you feel that way?

22. In the end, Will abandons Cassie after the revelations about her involvement in S.E.C.R.E.T. Do you understand why he felt he had to do this? Or do you think he was overwhelmed by this news so soon after Tracina’s betrayal? What do you think they’ll have to overcome to be together again?

23. At least for a while it looks like Cassie might pair up with Jesse again. Do they make a good pair? Do you think they reignite their passion at the end of the book? What are their chances for the long haul?

24. No Judgments. No Limits. No Shame. Over the course of the book, each tenet of S.E.C.R.E.T.’s motto is put to the test. Talk about the challenges the S.E.C.R.E.T. members face in upholding these values, and whether there are any times they fail to do so. What do you make of this motto in your life?

The Darker Side of Pleasure
Eden Bradley

Break Me Down
Roni Loren

The Master
Tara Sue Me

Restrained Under His Duty
Stacey Kennedy

Behind the Curtain
Beth Kery

The Flirtation
Tara Sue Me

The Collar
Tara Sue Me

The Exhibitionist
Tara Sue Me
Back to Top