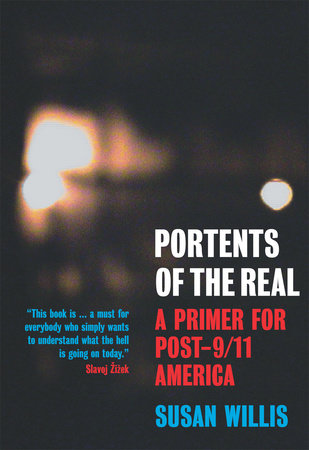 Portents of the Real

About Portents of the Real

The shock and horror that gripped America on September 11, 2001, has given way to a culture of pathological worry. Ignited by the terrorist attacks, anxiety has been fueled by the nation’s official response, which sanctioned a narrative good vs. evil, the suppression of intellectual debate and the political expediency of keeping the citizenry in a constant state of fear. Snipers in the capital, the government in bunkers, flag euphoria and anthrax hysteria, torture in Abu Ghraib and a stuntman who survived Niagra Falls – these are the nation’s portents, signs of the times in post-9/11 America. Portents of the Real examines culture to apprehend the foreboding political subtexts of a nation perpetually at war on terror.

Against an ever deepening climate of political repression and a journalistic landscape dominated by sensationalized controversy and historical forgetfulness, Susan Willis offers an astute analysis of the realities behind America’s cultural myths. The effect is both wry and unnerving.

“What we have here, then, is a political analysis, but one that goes beyond traditional critique and is more subtle and intelligent in that it ferrets out the weaknesses and identifies the fault lines of the system by an oblique approach that ultimately detects the ways in which that system destroys itself—with the torturer showing through the victim, the Real showing through in the appearance, in keeping with a set of rules that is both secret and fundamental. ‘What goes around comes around.’”—Jean Baudrillard

“The lesson of Mao was right: revolution is, at its most radical, a cultural revolution. It is sad that, today, we have to learn this lesson from the neo-con Bush-men. However, Susan Willis’s new book saves the critical credentials of cultural studies. Its analysis of 9/11 as a cultural phenomenon does not deal with an aspect which is less important than its directly political or military side—on the contrary, it strikes at the very heart of the ongoing struggle. This book is therefore a must for everybody who simply wants to understand what the hell is going on today. To ignore it means you want to persist in your blessed ignorance—at your own risk and peril!”—Slavoj Žižek

Portents of the Real