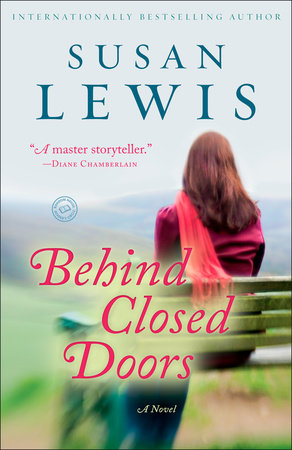 A Conversation with Susan Lewis

Random House Reader’s Circle: What inspired you to write about a missing-person case?

Susan Lewis: I think like most people I am fascinated—and terrified—by the thought of someone I love simply vanishing from the face of the world. I have explored this subject in other books, and I imagine it will come up again in the future, since there are so many possible reasons for a disappearance, and just as many possible outcomes.

RHRC: In the past you’ve traveled extensively, immersed yourself in the social work system, and gone to great lengths to build context for the stories you write. What was the most important part of your research for Behind Closed Doors?

SL: It was obtaining police cooperation. The book couldn’t have been written without it.

RHRC: Was there anything you learned that really surprised you during your research?

SL: The biggest surprise was just how many teenagers go missing. Most, thankfully, show up sooner or later, but some never do.

RHRC: Was Andee inspired by a real person? Why did you decide to make her have such a special connection to the case?

SL: Andee is purely fictitious. I don’t like to invade real people’s personal stories to the point of such brutal exposure.

RHRC: Did you always plan for Sophie’s parents to be guilty? Why or why not?

SL: Yes, that was always the plan, the reason being that Andee wouldn’t want to believe it of them, any more than she believed it of her own father. The blow of discovering it was them tips her into a new and necessary grief for her sister.

RHRC: Which character do you most connect with or have the most sympathy for? Why?

SL: Actually, it’s probably Gavin, Sophie’s father. He was doing his best after his wife died and he loved his daughter unreservedly, yet he still managed to get things wrong. Sometimes bad things just happen.

RHRC: What was the most challenging part of writing this novel?

SL: I usually write from the heart of a family; this time I’ve written from an outsider’s point of view. Having said that, Andee’s family is as key to the story as Sophie’s is.

RHRC: How does writing about such heartbreaking lives affect you as a person? As an author?

SL: It affects me deeply while I’m writing the story—if it didn’t, I couldn’t expect to connect with the reader. Many tears are shed during certain scenes, but I’m glad to say that laughter often gets me up from the computer as one of the characters does or says something I really wasn’t expecting.

RHRC: Is there a message that you hope readers will take away from the book?

SL: That even people who do bad things aren’t all bad.

One of my main aims with this book was to approach the story from a slightly different angle than usual, which I’ve hopefully achieved through Andee. This means that instead of viewing a situation from inside a family in crisis, we are coming to it through the eyes, and heart, of a detective.

I stress heart because I felt it was important to make Andee as human as any woman, caring about her job, but not so driven by it that she loses her sense of self. What does become difficult for her, is keeping her personal feelings under control as events start to chime with a tragedy she and her family suffered many years ago.

Her search for Sophie is, of course, key to the story, as is her fear that it might end the way it did for her sister.

We still don’t know what happened to Penny, because, sadly, some people never find their loved ones.

In Sophie’s case she is found, but not in the way we’d want her to be, and not before many prejudices and old grievances are thrown in the way of the investigation. Sometimes people are all too ready to believe the worst of someone, either because they have offended before, or simply because they’re foreign. A rush to judgment has played a key part in several of my books, mainly because I find it so intolerable.

Since the hardcover publication of this book in the UK I’ve had many emails from readers who say they wept a great deal at the end, and I admit I did, too, when I was writing it. I believe—hope—this shows how deeply we care about others, in particular the many vulnerable teenagers who go missing every year, some of whom are returned to their families, and some who are not. What goes on behind other people’s closed doors is something we are almost never privy to, unless some kind of tragedy occurs. Andee opens the door to Gavin and Heidi’s world, and we see how disastrously and irreversibly things went wrong for them in a few highly charged seconds of anger. They are not bad people, but they certainly did a bad thing, and we see how hard Andee finds that to cope with. As a woman and mother she is not without sympathy for the parents, but as a detective she can only condemn the covering up of their crime.

I hope you have enjoyed meeting Andee as much as I did when she came to me as a character, and also that you join me in wishing a far happier end for the very many families who, even as you read this, are out there searching for their missing loved ones.

1. This book tackles a sensitive topic. What was the most difficult part for you to read? Why?

2. Do you think Andee should have been removed from the case? Do you think she was a reliable investigator? Is it ethical for a detective to continue to work on a case that he or she has a close personal connection to?

3. Did you lose faith in Tomasz at any point? What triggered that loss of faith?

4. How do you think you would have reacted if you were in Heidi and Gavin’s position?

5. What do you think could or should have been done to prevent Sophie’s downward behavioral spiral?

6. Which character do you sympathize with the most? Why?

7. Were you ever curious about the robberies? Or was it a surprise that they were linked to the broader plot?

8. Did you suspect the parents all along? Were you surprised?

10. In many instances this novel presents adults who maybe aren’t paying enough attention to their teenage children. Think about Andee and Martin’s behavior too, not just Heidi and Gavin’s. Are they allowing their children a taste of independence and adulthood, or simply being negligent?

11. Many characters experience heartbreak of some form or another during this novel—Andee, Sophie, Gavin, Heidi, Kasia. Which character’s shoes would it be the hardest to walk in?

12. This novel explores themes of grief, broken homes, human trafficking, betrayal, and more. Which did you find the most powerful?

The Shade of My Own Tree
Sheila Williams

No Place to Hide
Susan Lewis

No One You Know
Michelle Richmond

The Midwife’s Tale
Gretchen Moran Laskas
Back to Top