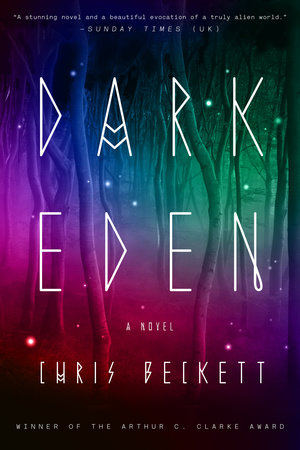 To connect with author Chris Beckett, visit his blog at http://www.chris-beckett.com/blog/.

On the alien, sunless planet they call Eden, the 532 members of the Family shelter beneath the light and warmth of the Forest’s lantern trees. Beyond the Forest lie the mountains of the Snowy Dark and a cold so bitter and a night so profound that no man has ever crossed it.

The Oldest among the Family recount legends of a world where light came from the sky, where men and women made boats that could cross the stars. These ships brought us here, the Oldest say—and the Family must only wait for the travelers to return.

But young John Redlantern will break the laws of Eden, shatter the Family and change history. He will abandon the old ways, venture into the Dark…and discover the truth about their world.

Already remarkably acclaimed in the UK, Dark Eden is science fiction as literature; part parable, part powerful coming-of-age story, set in a truly original alien world of dark, sinister beauty–rendered in prose that is at once strikingly simple and stunningly inventive.

1. How have the origins of Eden shaped the society it has become?

2. Why has it been mainly women who have run things in Eden up to the time of the story and why are men taking over in the world of Dark Eden?  Is this what happened in the history of Earth?

3. The first woman on Eden was faced with the choice of (a) attempting a return to Earth that would almost certainly end in death or (b) remaining on Eden with a man she didn’t know well and was not sure that she liked.  What would you have done, faced with this choice?

4. Why did Angela pass on the Secret Story to her daughters?  Why not also to her son?

5. What is your sense of the relationship between the original couple on Eden?  How is it remembered by the people of Eden?  How has it affected the development of Family generations on?

6. The third generation on Eden could only exist if the second generation committed incest: what kind of consequences did this have, genetic and social?

7. How do you think language would develop in a society that began as this one did?

8. How would time be experienced in a world with no day and no night, no year and no seasons?

9. Did John Redlantern do the right thing?  If not, who had the better idea?

10. John is a leader, as is David, but so are Caroline Brooklyn (the Family Head), David, Mehmet, Bella, and, in a way, Tina and Jeff as well.  Who would be their counterparts in the contemporary world?

11. Do you have to be an egotist to be a leader?  What is John’s motivation for wanting to break away from Family?

13. How might the belief system of Eden evolve in future generations?  What is the book’s view of the way that belief systems evolve over generations, and do you agree with it?

14. What does the future hold for Eden at the end of the book?  Has progress been made?  Could things have taken a different or better course?

15. What are the parallels and differences between this Eden story and the original biblical one?

16. The story is told primarily by John and Tina, but also by several other narrators.  What are the advantages and disadvantages of telling a story in this way?

17. Could life really evolve on a planet without a sun?

18. The relationship between the present, the past, and the future is important in this book.  What does it say about how we deal with the past?

19. The author of this book is a professional social worker.  Do you see any reflection of that background in the way the book is written?

20. As in Tolkein’s famous trilogy, a ring is very powerful in this story.  What are the similarities and differences between the roles of the two rings?

21. The author has identified William Golding’s Lord of the Flies as an influence on this book, as well as Russell Hoban’s Riddley Walker.  What are the similarities and differences?

Chris Beckett is a university lecturer living in Cambridge. His short stories have appeared in such publications as Interzone and Asimov’s and in numerous “year’s best” anthologies.
Learn More About Dark Eden
print

Starbound
Back to Top