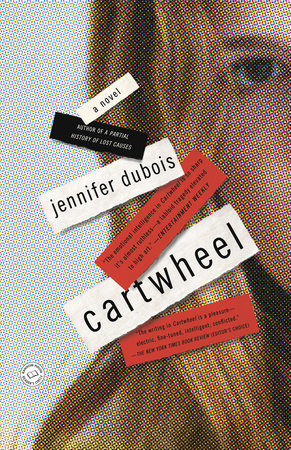 1. The first paragraph of Cartwheel ends with a chilling statement: “The things that go wrong are rarely the things you’ve thought to worry about.” Why do you think the author makes such a pronouncement at the beginning of the novel? What does she mean? Is this true in your life?

2. The story in Cartwheel is very much of our time. Lily’s case becomes an international sensation because of Facebook, blogs, and the way shocking news and information can travel around the world within minutes. Social media plays a big role in Cartwheel. Does this change your view of social media? How do you use social media to share details of your life? What about your family members?

3. Why do you think Jennifer duBois chose to tell the story from four points of view? How does that affect the experience of reading it?

4. At one point, Lily’s sister Anna says “everyone wants to love Lily,” and that she’s always played by different rules. Why does Anna think this?

5. Lily’s father, Andrew, believes “everything vile about your children was to some degree vile about yourself.” Is this a fair statement? Do Lily’s parents fail her, or is this parental guilt?

6. What impact does her sister’s ordeal have on Anna?

7. The title of the book comes from the cartwheel Lily turned between interrogation sessions. Why did the author choose this image as significant?

8. In what ways are Lily and Katy different? Why does Lily feel Katy’s life was “easy”? Is she being fair?

9. Have you, or someone you know, studied abroad? Do you think it benefits college students to visit other countries? Why do you think Lily wanted to study abroad? What was she looking for?

10. Eduardo, attorney for the prosecution, believes Lily is guilty but that she doesn’t understand why what she did was wrong. Do you agree?

11. Sebastien is an enigmatic character. What do you think Lily is attracted to about him? Where do you think his addiction for obscuring half-irony comes from? What consequences does it have for the unfolding of events?

12. The author uses ambiguity to tell this story. How does that affect your understanding of what happened? Which character do you trust the most?

13. Lily calls her family “repressed,” saying they never learned how to mourn their first child, the sister who died before Lily and Anna were born. Why does she say she and Anna were treated like “replacement children”?

14. Do you believe the whole story comes out at Lily’s trial?

PRAGUE, Arthur Phillips
Arthur Phillips’s smart, sharply funny first novel follows a group of expats in post-Communist Budapest. Collectively, they are plagued by the creeping suspicion that real life is elsewhere—in the past, perhaps, or just possibly in Prague.

THE QUIET AMERICAN, Graham Greene
A prophetic critique of the folly of mapping simple theories onto complex realities, The Quiet American is also a broad reflection on the dangers of innocence itself; innocence, Greene writes, is “like a dumb leper who has lost his bell, wandering the world, meaning no harm.”

THE RELUCTANT FUNDAMENTALIST, Mohsin Hamid
This nuanced meditation on nationality, allegiance, and home is structured as a conversation between two travelers: a Pakistani speaker called Changez, and the unnamed (and possibly armed) American who listens to his story.

PALE FIRE, Vladimir Nabokov
Pale Fire is full of exiles: there is American writer John Shade, exiled from his own epic poem by the long-winded footnotes of academic Charles Kinbote, himself an exile from the mysterious land of Zembla, whose commentary increasingly concerns the story of Zembla’s own exiled king. A prismatic exploration of narrative itself, Pale Fire is a book that somehow becomes a universe—making dazzled voyagers of us all.

Learn More About Cartwheel
print
Back to Top