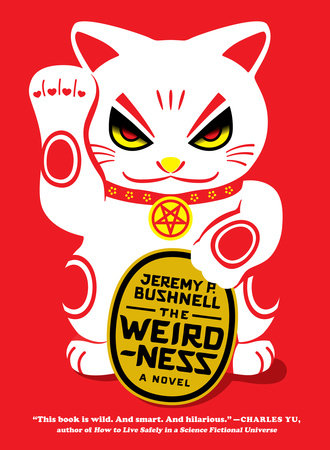 Reading Group Guide for The Weirdness

1. Where do the bananas in bodegas come from? Have you ever thought about something so long that it becomes strange, the way Billy thinks “people have pets”? What started to seem strange to you?

4. How did your perception of Lucifer change over the course of the story? If he had given you a convincing Powerpoint Presentation, do you think you would have signed on to help him?

5. What do you think Bingxin Ying meant when she told Denver that she admired her “commitment to immanentization of the ephemeral”? How do you think this phrase affects Billy in the moment she says it, and later in the book, when he tries to get closer to Denver?

6. On p. 128, were you surprised to find out that Laurent hadn’t read Billy’s work? How did it change your perception of Laurent and his crew?

7. On p. 135, do you believe Lucifer when he says Billy doesn’t want to go back to his old life? Did you expect Billy to choose the Devil’s side?

8. What do you imagine the warlock might do with the Neko of Infinite Equilibrium? Do you trust that Lucifer will do the right thing?

9. Billy is constantly slowed down by coffee, traffic, and other simple forms of conflict rarely represented in books. Did the story feel more realistic to you, based on these moments?

10. How did Billy change over the course of this story? Do you think Billy agreed to the right compromise—protecting Elissa and Jorgen by asking Lucifer to train new hell-wolves from the next generation?
Learn More About The Weirdness
print

The Magician and the Fool
Barth Anderson

Beyond the Pale
Mark Anthony

The Gates of Winter
Mark Anthony

The Keep of Fire
Mark Anthony

Bliss
Peter Carey
Back to Top