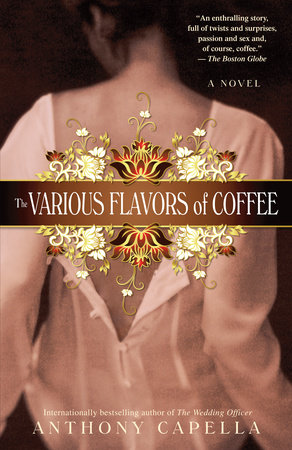 Hailed for writing international bestsellers that delight the senses, Anthony Capella now brings readers a passionate adventure set against the backdrop of the coffee trade. Stretching from London to Africa at the turn of the last century, The Various Flavors of Coffee is a sweeping saga of forbidden love, trade secrets, and the playfully delicious story of a young man’s coming-of-age.

Robert Wallis is a struggling poet, borrowing his way into a life of decadence. Then a chance encounter at a coffeehouse puts him on a very different path—one that promises wealth, while leading him to a political idealist who, somewhat to his surprise, captures his heart. Their love is tested when Wallis travels to the legendary birthplace of coffee, Abyssinia, searching for true Arab mocca. There, he will meet a defiant, breathtakingly beautiful slave woman who will change everything he ever believed about freedom…. and about love.

The questions and discussion topics that follow are intended to enhance your reading of Anthony Capella’s The Various Flavors of Coffee. We hope they will enrich your experience of this extraordinary novel.

1. What did you discover about fin-de-siècle England by reading The Various Flavors of Coffee? What makes this time and place ideal for love stories such as Robert and Emily’s?

2. Discuss the significance of coffee as Samuel Pinker’s chosen product. What makes Robert suited to the job of describing an addictive pleasure? What do Pinker’s other marketing tactics achieve?

3. What sparks Emily and Robert’s mutual attraction? What makes Emily different from the other women he has known?
4. Browse through the epigraphs that appear on the opening pages of various chapters and parts, and the quotation that opens the book. What sort of poetry do they form, echoing Robert’s verse and enhancing the novel?

5. A frequent client of prostitutes, Robert becomes interested in the taboo subject of women’s sexual pleasure. In what ways is he a very exceptional yet a very typical man for his generation? Why did society question whether it was possible for women to enjoy sex? Were you aware of the medical procedures once used to treat hysterics?

6. Fikre was literally enslaved, and Emily was symbolically enslaved. What do both characters demonstrate about women’s history? How did obedience, virginity, and other factors determine their “value”?

7. How were Pinker’s daughters affected by his parenting style? What distinctions did he make between daughters and sons?

8. Discuss Arthur’s career in politics, and Emily’s role in that life. Is their style of marriage completely outdated? Do similar marriages still exist in the contemporary world?

9. Compare Hector to Robert. What did Emily admire about both men? Was Hector’s life driven more by fate or by his own choices?

10. At its core, is Fikre’s story any different from the other “various flavors” of love in the novel? In what ways is Mulu a desirable man, perhaps even more desirable than any of the other male characters?

11. Ultimately, what was the reason Robert and Emily’s story unfolded as it did? Were you surprised by the revelations in her letter, appearing in chapter eighty-seven?

12. What did you learn about Britain’s suffragettes? What did Emily’s hunger strike indicate about her true self? What similar social-justice movements exist today in your community?

13. Are there any traces of Frog left in the grown-up Philomena? How does Philomena honor her sister’s legacy? In what ways are they very much alike?

15. What does Africa represent to Robert? How does the landscape of foreign lands compare to that of England? How do the novel’s varying settings create meaningful backdrops for the episodes in Robert’s life?

16. To what extent does Emily’s relationship with her father shape her dealings with other men? Is Pinker senior an admirable figure or a fatally flawed one? Why does Robert accuse Emily at the end of the book of being just like him?

17. What are the key moments that show us Robert growing up? How does his character change? What does the voice of an older Robert Wallis convey as he recalls his life?

18. How does Robert’s voice – and his character – change as he interacts with different people, for example when writing letters? What does this say about him?

17. Anthony Capella’s previous novels also deal with sensual delights and international locales. How does this blend make his work unusual or unique?

Learn More About The Various Flavors of Coffee
print