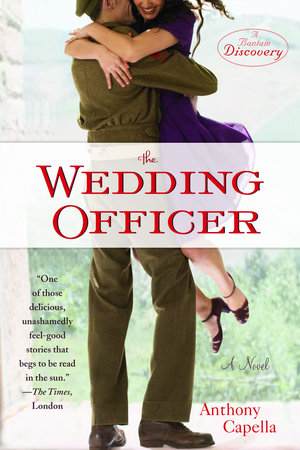 In the luscious tradition of Chocolat and Captain Corelli’s Mandolin, acclaimed novelist Anthony Capella brings us a tale of war-torn Europe—and the sumptuous cuisine that sparked renewed hope, as well as an unexpected romance, for a young Italian widow and a British Army captain.

Livia Pertini is renowned for her cooking at a local osteria and has just settled into married life when the atrocities of World War II destroy the only sense of home she has ever known. Receiving the harrowing news that her husband has been killed in action, the beautiful culinary master wonders how she will survive.

Captain James Gould arrives in Naples amid rubble and starvation, determined to stamp out the flourishing black market and restore order to a land whose language he speaks fluently but whose culture he naively misunderstands. In a time and place marked by deprivation, he hires Livia as a cook—and soon discovers the succulence of her magnificent dishes, with ingredients procured as if by magic. He soon hungers not only for her feasts but also for her love. But one of his duties is to serve as the “wedding officer,” the man assigned to deny permission for marriage to British soldiers and their sultry Italian girlfriends. His seduction by Livia goes against everything he believes in, yet he is about to learn that passion is also the most thrilling hunger to feed.

The questions and discussion topics that follow are intended to enhance your reading of Anthony Cappella’s The Wedding Officer. We hope they will enrich your experience of this unique and delectable novel.

1. What aspects of Livia’s personality are illustrated in the novel’s opening scenes? What parts of her identity fade after Enzo leaves, and what aspects are intensified when she is on her own?

2. Discuss the different types of hunger described in The Wedding Officer. Which ones are the most powerful—the hunger for companionship, food, or sex? In what way do James’s and Livia’s appetites change throughout the novel?

3. Why did James’s superiors believe it was necessary to regulate the marriages between servicemen and their Italian girlfriends? What did the interview questions indicate about the gulf between reality and pretense during this episode in history?

4. Chapter twenty-one ends with Livia feeling furious because of James’s apparent lack of interest. What do their different approaches to courtship say about their cultures?

5. Initially, James says that he doesn’t have much authority. What power does he really have? What does his experience indicate about a person’s ability to make change, regardless of what the official limitations are?

6. Discuss the issue of language as it plays out in the novel. How does it help and hinder the characters to have limitations in their ability to communicate? In what ways is food a universal language? What did James’s “food language,” which forbade things like garlic and emphasized potatoes over pasta, say about his personality?

7. Livia highlights the sensual pleasures of food when she serves the officers snails and peas, all still in their shells. What other ways does she have of using food to seduce?

8. How familiar were you with Italy’s experience with the war, and the rise of Mussolini? What aspects of history and culture in The Wedding Officer surprised you?

9. How did the economics of war become a sort of weapon as well? Was James right to try to eliminate the black market? How does corruption become defined under these circumstances? Beyond the issue of nutrition, what does it do to a community to deprive them of their national cuisine?

10. In chapter thirty, James is exasperated to discover that Livia doesn’t measure any of her ingredients. What turning points does this scene capture? What do they eventually teach each other about intuition and rules?

11. Livia deeply resents the Allies. What does her story demonstrate about the role of liberators in a foreign land?

12. Would you have given in to Alberto’s demands if you had been in Livia’s position? Was the survival of her family always the top priority in her life?

13. Livia tells James she is adamant in her support of communism. What aspects of history are captured in this conversation? What makes communism so appealing to her? What is her understanding of its promise?

With Love from the Inside
Angela Pisel

In the Quick
Kate Hope Day

Bitter in the Mouth
Monique Truong