His Illegal Self Reader’s Guide 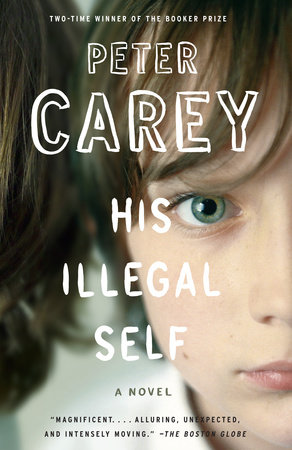 His Illegal Self Reader’s Guide

print
His Illegal Self Reader’s Guide

The introduction, questions, and suggestions for further reading that follow are designed to enliven your group’s discussion of the new novel by two-time Booker Prize–winner Peter Carey.

Set in 1972, His Illegal Self tells the story of an unusual family, split apart by the radical culture of the 1960s. Seven-year-old Che has been raised by his maternal grandmother in the comforts of her quiet lake house and her lavish apartment on New York’s Upper East Side. Che’s mother, a radical SDS member named Susan Selkirk, has long been a wanted criminal, completely absent from her son’s life. Che has wondered about his parents, and clung to the words of his teenage neighbor: “They will come for you, man. They’ll break you out of here.”

One day, a young hippie woman shows up at Che’s apartment, introducing herself as Dial. Whisking him away in the middle of the afternoon, Dial brings Che through the subways, bus stations, and off to Philadelphia, Oakland, Seattle, Sydney, Brisbane, and to a rainforest commune in Queensland.

Dial is an old Harvard friend of Susan’s, charged with delivering young Che to his mother. But when tragedy makes this plan impossible, Dial is at loose ends. She and Che are all over the news and Dial has been accused of kidnapping the boy. Her only hope is to hide out with Che in the Australian jungles.

On this hippie commune, far off the grid of civilization, the pair settle into the dispirited limbo, coping with the peculiar rules, a strange landscape, and painful isolation. As Dial watches her academic career go up in smoke, Che wonders how his mother will ever find him in this jungle at the ends of the earth. Their isolation is enlivened by the presence of the feral English hippie, Trevor. An orphan and an outlaw, Trevor mirrors Che in many ways, teaching him how to work the land and how to survive in a dangerous, unforgiving world.

Alternately told through Che’s and Dial’s perspective, the novel vividly evokes Che’s bewilderment and his longing for love and safety, as well as Dial’s fear and regret. It also expresses, quite viscerally, the helplessness of a child in an adult world, who is totally dependent on people who rarely tell him the truth of his own situation.

A masterfully written and enigmatic novel, His Illegal Self offers a deeply unsettling look into the minds and hearts of two people who are controlled by the social and political tensions of an era.

1. Peter Carey is frequently drawn to writing about outlaws and outcasts. Why do you think this is? Why do we like to read about such characters?

2. What do you think Che’s personal and social values are? How has his life been shaped by the lives of his parents, even though he has not been raised by them?

3. Anna Xenos is nicknamed “Dial” (short for dialectic) by her Harvard classmates. It’s a playful nickname, given because Dial will argue both opposing sides of an argument, but do you think that the novel itself is in any way dialectical?

6. Dial says of her actions: “You take the kid to the father, but the father doesn’t want to know. By then you are accused of kidnapping. You get frightened. You run away. Dumb, but not criminal” [p. 245]. Do you think Dial is guilty of kidnapping, or simply of making what seems to be the best choices available in a very difficult situation?

7. In what ways does His Illegal Self illuminate the social and political tensions of the 1960s? What role does Dial’s own social status, and her relationship to the Selkirk family, play?

8. Why doesn’t Dial tell Che that she’s not his mother? Is she simply protecting him, or does she have some unconscious motive for wishing to play the role of his mother?

9. Dial thinks that the most remarkable thing about Che was his “perfect trust” [p. 120]. Does Che lose his trust in Dial and the adults around him over the course of the novel? In what ways can His Illegal Self be read as a story about the loss of innocence?

10. Looking back, Dial regrets the moment when she took Susan Selkirk’s number and, “relishing her connection with the famous,” decided to call her [p. 62]. Why does she call Susan and agree to her request? In what sense is this a major turning point in her life?

11. What is life like in the Queensland hippie commune? In what ways does the commune seem to perpetuate, rather than reject, many of the social rules and behaviors it has tried to abandon?

12. What role does Trevor play in the story? How do Che’s feelings about him change over the course of the novel?

13. The novel ends with this remarkable sentence: “Even as an adult he would believe that something physical had been left inside him—small, smooth, not a pearl, more lustrous, luminous, a sort of seed which he would eventually pretend to believe was simply a memory, nothing more, that he would carry along the littered path which would be his own comic and occasionally disastrous life” [p. 272]. What is that “seed” which has been left inside Che? What kind of life do you think he is likely to have after such a childhood?

14. What does the novel reveal about our own time? Are there significant parallels between the worlds Carey describes and America’s current social and political situation?

Peter Carey is the author of nine novels, and has twice received the Booker Prize. His other honors include the Commonwealth Writers’ Prize and the Miles Franklin Literary Award. Born in Australia, he now lives in New York City.

Charles Bock, Beautiful Children; Kazuo Ishiguro, When We Were Orphans; Denis Johnson, Tree of Smoke; Yasmina Khadra, The Sirens of Baghdad; Jonathan Lethem, The Fortress of Solitude; Richard Price, Lush Life; J. D. Salinger, The Catcher in the Rye.
Learn More About His Illegal Self
print

The Cadence of Grass
Thomas McGuane